Atypical hemolytic uremic syndrome (aHUS) is a rare disease caused by complement dysregulation that may involve the extra-renal system. Without appropriate prophylactic treatment, aHUS commonly recur after kidney transplantation (KT). In contrast, cytomegalovirus (CMV) infection is common in KT recipients and may affect various organ systems. Herein, we report a case of recurrent aHUS complicated by CMV enteritis. This 17-year-old KT recipient with aHUS having a CFH mutation was admitted to the hospital for gastric pain and vomiting. With worsening hemogram, recurrence of aHUS involving the gastrointestinal (GI) system was suspected. Upon treatment with anti-C5 antibody, the patient’s blood counts soon improved, but her GI symptoms did not. Esophagogastroduodenoscopy revealed multiple ulcers in the duodenum with pathologic findings consistent with aHUS and CMV enteritis; however, she did not have CMV antigenemia despite these findings. Treatment with ganciclovir resolved GI symptoms within 7 days. This case shows that recurrence of aHUS is often induced by intercurrent infection, and common infections after allograft transplantation, such as CMV, should always be suspected and confirmed for a proper treatment, particularly because CMV enteritis may not accompany CMV antigenemia.

Hemolytic uremic syndrome (HUS) is characterized by thrombotic microangiopathy (TMA) of thrombocytopenia and microangiopathic hemolytic anemia, and acute kidney injury. Atypical HUS (aHUS) is attributed to complement dysregulation in most cases, and it accounts for approximately 5%–10% of all pediatric HUS cases [1]. Although aHUS primarily targets the kidneys, approximately 20% of patients present with extra-renal manifestations [2]. aHUS is notorious for recurrence, often accompanying minor triggers such as infection; therefore, the outcome of kidney transplantation (KT) was poor in patients with aHUS. Recently, anti-C5 monoclonal antibody therapy has become available, thereby successfully treating and preventing aHUS recurrence [3].

Cytomegalovirus (CMV) is one of the main infectious causes associated with significant morbidity and mortality among transplant recipients [4]. Because CMV infection is common after KT, this may induce de novo or recurrent HUS after transplantation [5]. CMV infection can also involve various organ systems, including gastrointestinal (GI) tract. CMV disease of the GI tract is defined as a combination of clinical symptoms from GI tract or macroscopic mucosal lesions on endoscopy and CMV infection based on culture or identification of CMV by special staining in a biopsy specimen. Because real-time polymerase chain reaction of blood specimens yields positive results only in 50% of patients with biopsy-proven CMV enteritis [6], the surveillance of CMV in blood specimens alone is not sufficient to rule out CMV disease of the GI tract [6,7]. Herein, we report a pediatric KT recipient of recurrent aHUS with CMV disease of the GI tract.

All procedures performed in studies involving human participants were in accordance with the ethical standards of the institutional and/or national research committee and with the 1964 Declaration of Helsinki and its later amendments or comparable ethical standards. The study was approved by the Institutional Review Board of the Seoul National University Hospital (IRB No. 2105-132-1219). And informed consent was received from the patient and a caregiver.

A 17-year-old female KT recipient was admitted to the hospital for gastric pain and vomiting that started 4 hours before. Previously, she was diagnosed with end-stage kidney disease of unknown origin at the age of 8 years. In addition to azotemia, her serum complement level was low. Soon, she was started on peritoneal dialysis. Later, targeted gene panel sequencing revealed that she had a variant in the gene (c.3593A>T in exon 22 [p.Glu1198Val]), suggesting aHUS as the underlying cause. At the age of 14 years, she was offered a graft kidney from a 46-year-old male deceased donor, whose human leukocyte antigen (HLA) typing was mismatched for five of eight HLA antigens with those of the patient. Immunosuppressive therapy consists of triple therapy with mycophenolate mofetil, tacrolimus, and prednisolone after basiliximab induction. Based on the genetic diagnosis of aHUS, she was managed with prophylactic plasma therapy, including plasma exchange (50 mL/kg) and fresh frozen plasma (FFP) infusion (20 mL/kg) pre- and post-transplantation, and FFP infusion was maintained to prevent aHUS recurrence. However, she experienced several aHUS recurrences after KT coinciding with infections, such as pneumocystis pneumonia or other minor infections, which was managed with intensive plasma therapy including plasma exchange. Her allograft renal function deteriorated gradually, and the kidney biopsies 5 months and 30 months after KT were consistent with recurred HUS, chronic phase. Regular monitoring for CMV, Epstein-Barr virus, and BK viruses, and panel-reactive antibodies against HLA, were all negative.

Since early morning of the day of current admission, she vomited with gastric pain and complained of general weakness. Clinical examination upon admission revealed a slightly distended abdomen without tenderness. The laboratory workup revealed aggravated azotemia (Table 1). After admission, diarrhea started, and additional FFP was administered to prevent aHUS recurrence, which might be triggered by gastroenteritis. Steroid and tacrolimus were continued, and mycophenolate mofetil was discontinued to ameliorate GI symptom and infection. Despite aggressive treatment with daily FFP infusions and proton pump inhibitor, the symptoms worsened, and the patient developed melena, along with evidence of TMA including schistocytes (Figs. 1 and 2). Due to suspicion of aHUS with GI tract involvement, she was enrolled in a clinical trial using long-acting anti-C5 antibody, which was administered on day 7 of admission. Esophagogastroduodenoscopy (EGD) on the following day revealed hemorrhagic gastritis and multiple longitudinal ulcers in the lower esophagus and 3rd portion of the duodenum (Fig. 3). Histopathological examination showed chronic active duodenitis with ulcer and hyalinized capillaries with microthrombi as previously reported in GI involvement of aHUS (Fig. 4) [8], along with few CMV-infected cells in the duodenum. 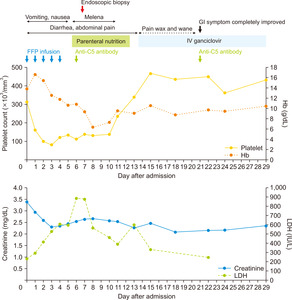 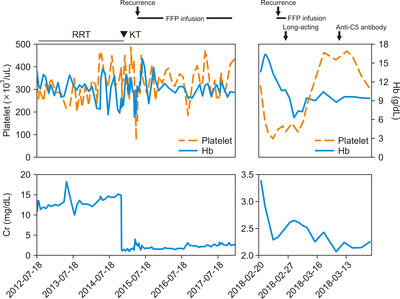 Figure 3. Endoscopic findings of the patient. (A) Hemorrhagic gastritis and edema in the stomach. (B) Multiple longitudinal ulcers in the 3rd portion of the duodenum. 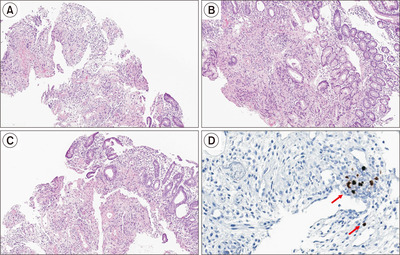 The patient received total parenteral nutrition because she could not tolerate oral intake. Four days after treatment with anti-C5 antibody, the platelet count, followed by Hb levels, normalized, and melena and gastric pain improved. On day 15 of admission, after the pathological report became available, ganciclovir was administered; 7 days after ganciclovir treatment, her GI symptoms completely improved and oral intake became possible as usual. Treatment for CMV enteritis continued for 6 weeks, initially with ganciclovir for 2 weeks, followed by valganciclovir for 1 month. During this period, the CMV antigenemia test was performed weekly, and the result remained negative. On the 30th day of hospitalization, she was discharged with improvement of laboratory findings (Table 1, Fig. 1). Since then, she remained clinically stable with maintenance therapy with maintenance anti-C5 antibody, without FFP transfusion. Four months after discharge, follow-up EGD indicated improvement compared with the previous endoscopy. In addition, the results of the CMV antigenemia test, performed every 6 months after the end of the medication, remained negative.

aHUS has a relapsing course, and it is associated with a high risk of permanent renal damage [9]. In some patients, other organs, including central nervous and GI systems, are affected [2]. Our recurrent aHUS patient had severe GI symptom during this episode; therefore, GI involvement of aHUS was suspected. However, her GI symptom did not disappear despite improvement of hematologic findings with anti-C5 antibody treatment. Oral intake became possible after treatment for CMV infection, which was diagnosed only after further investigation for her symptom through invasive procedure of endoscopy. Though CMV infection itself might induce intestinal TMA, TMA of this case was reckoned as a recurrence of aHUS triggered by CMV enteritis, considering her underlying genetic predisposition [5,10]. Although cases of aHUS accompanying CMV infection after KT have been reported [5], but our case is worth noting because it is rare, and CMV infection might have been missed because there was no CMV antigenemia.

The current therapeutic options for aHUS are plasma exchange and anti-C5 antibody. Previously, therapeutic plasma exchange is considered as the first-line treatment. It facilitates the clearance of abnormal complement-related factors and provides complement-regulatory factors to the circulation [11]. However, even intensive plasma therapy could not prevent permanent renal damage, and patients with recurrent aHUS had poor kidney survival. Furthermore, aHUS commonly recurs after KT, thereby damages the allograft. Upon the availability of anti-C5 antibody, it has become the gold standard treatment for aHUS. It was found to have a good efficacy and safety profile, which can preserve renal function [12]. Moreover, extra-renal symptoms of aHUS were also resolved with anti-C5 antibody [13]. Our patient experienced recurrent episodes of aHUS, which were often induced by minor infections after KT. Despite regular plasma infusion, the patient’s allograft renal function was declining stepwise after the episodes. In this case, aHUS and renal function improved to some extent after treatment with anti-C5 antibody and regular plasma infusion was no longer necessary with maintenance of anti-C5 antibody treatment.

In KT recipients, regular check-up for CMV infection is extremely important, however, in cases of CMV GI diseases, screening of blood sampling alone is not always diagnostic [14]. In fact, our patient did not show CMV antigenemia during the course of CMV enteritis. However, she was pathologically diagnosed, which was performed due to prolonged gastric pain and melena. The current treatment guidelines recommend either valganciclovir or intravenous ganciclovir for mild CMV [15]. Our patient was treated with intravenous ganciclovir induction therapy for 2 weeks due to impaired absorption from CMV enteritis. Her abdominal pain improved significantly after 2 weeks of treatment. Looking back, her GI symptoms could have been improved by treatment for CMV enteritis without anti-C5 antibody administration because some secondary TMAs could be improved by treatment of the triggering factor.

Herein, we report the case of a patient with aHUS who experienced multiple relapses after KT, whose last relapse before anti-C5 antibody treatment was considered to be triggered by CMV disease involving GI tract. Proper diagnosis and treatment were possible only after endoscopic biopsy of GI tract. This case demonstrates that recurrence of aHUS is often induced by intercurrent infection, and common infections after allograft transplantation, such as CMV, should always be suspected and confirmed for proper treatment, particularly because CMV enteritis may not accompany CMV antigenemia.

Hee Gyung Kang is an editorial board member of the journal but did not involve in the peer reviewer selection, evaluation, or decision process of this article. No other potential conflicts of interest relevant to this article were reported.

We would like to thank the patient for providing authorization for the publication of this case report.