Heart transplantation in a patient with complex heart lung disease: a case report

Despite the difference between the reports, it is known that about 10%–40% of patients with heart failure (HF) are accompanied by chronic obstructive pulmonary disease (COPD) [1]. Furthermore, according to a report by Boudestein et al. [2] COPD patients with HF are expected to have double the mortality rate of the ones without HF. Moreover, In reports by McCullough et al. [3] and Rutten et al. [4], the prevalence of unrecognized HF was 20.9% in patients with COPD or asthma presenting to the emergency department, 20.5% in community patients with stable COPD.

Heart or Lung transplantation has been regarded as a definitive treatment for the end-stage disease of both organs where ordinary medical or surgical treatment results in no improvements. the median survival of heart and lung transplantation (HLTx) is known to be 4.5 years, which is much shorter than 12.5 years of heart only transplantation (HTx) [5]. Therefore, when treating a patient with both heart and lung diseases, itʼs quite crucial to discriminate which one of the two is accountable for the severe symptoms. We are reporting one case that showed a substantial improvement of pulmonary function test (PFT) after the HTx in a patient with severe cardiopulmonary disease at the same time.

This study was approved by the Institutional Review Board of Pusan National University Yangsan Hospital (IRB No. 05-2021-236), which waived the requirement for informed consent.

A 63-year-old man (blood group, Rh+ AB) presented with progressive dyspnea for 6 months despite optimal medical therapy. The patient had a permanent pacemaker implanted in 2015 for sinus node dysfunction. In 2020, his dyspnea gradually worsened. Coronary angiography revealed stenoses at the mid-left anterior descending coronary artery (mid-LAD) and chronic total occlusion of the right coronary artery, for which a stent was inserted at the mid-LAD. However, his left ventricular ejection fraction (LVEF; 31%) worsened despite receiving guideline-directed therapy for HF with reduced ejection fraction for several months.

Further, he underwent bronchial arterial embolization for management of an acute episode of hemoptysis. Since the bleeding focus was obscure, the embolization material was sprayed out non-selectively. Antithrombotic agents other than aspirin were discontinued. Due to his heart and lung condition, transplantation of both organs was recommended, and he was transferred to our institution.

His vital signs were as follows: blood pressure, 90/60 mmHg; heart rate, 80 beats/min; body temperature, 36.7°C; respiratory rate, 20 breaths/min. His arterial oxygen saturation was 91%, while receiving oxygen through a nasal cannula at a 2 L/min flow rate. In addition to an increased cardiothoracic ratio, chest radiography also showed a dilated pulmonary trunk and pulmonary congestion (Fig. 1A). Paced rhythm on top of atrial fibrillation (AF) was identified on electrocardiogram; however, the QRS width of the pacing beat was widened to 164 ms (Fig. 1B). We suspected that pacemaker-induced cardiomyopathy may have played a role in the deteriorating heart function. 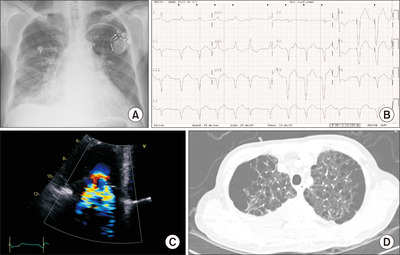 Echocardiography showed a left ventricular end-diastolic diameter of 57.3 mm and LVEF of 26%, which had worsened when compared to an echo done 5 months prior. A right ventricular (RV) systolic pressure of 40 mmHg indicated pulmonary hypertension. Severe tricuspid regurgitation due to coaptation failure of the tricuspid valve was also identified (Fig. 1C), and multi-cystic lesions in both upper lungs were detected on chest computed tomography (Fig. 1D). The PFT results were: a forced vital capacity (FVC) of 2.17 L (predicted value, 4.18), a forced expiratory volume 1.0 (FEV1.0) of 1.27 L (predicted value 3.11), and a diffusing capacity of carbon monoxide (DLCO) of 7.2 mL/mmHg/min (predicted value, 20.7), which constitutes a severe obstructive and restrictive pattern with severely decreased DLCO. Simultaneous HLTx were indicated.

A multidisciplinary team composed of cardiologists, cardiothoracic surgeons, and pulmonologists, proposed three treatment options. First, a cardiac resynchronization therapy with a defibrillator may have been suitable for the patient, considering the AF with a widened QRS. Simultaneous tricuspid valvuloplasty with left atrial closure may have improved heart function and reduced the risk of systemic thromboembolism. However, the ischemic component of the left heart would persist, and the effect of the synchronized therapy was unpredictable. In addition, withheld triple therapy (dual antiplatelet therapy and anticoagulation) owing to obscure hemoptysis was another concern. The second option was heart transplantation. It is regarded as the best method for heart function recovery and discontinuation of antithrombotic agents. However, the severely damaged pulmonary function could have resulted in difficulties in post-transplant ventilator weaning. Pulmonary infection could also occur while taking immunosuppressants. Lastly, both HLTx could replace the compromised heart and lungs. However, the relatively short median survival of 4.5 years compared with that of HTx, especially in the early phase, seemed unsatisfactory [5]. The discussion culminated in an additional test to guide us to an appropriate treatment decision.

To assess the amount of harm caused by the heart on the lungs, we performed right heart catheterization through the left cephalic vein without an oxygen supply. Dobutamine 5 μg/kg/min was given intravenously. The estimated numbers were as follows: the main pulmonary artery systolic/diastolic/mean pressure was 57/34/41 mmHg; the pulmonary artery wedge pressure (PAWP) was 33 mmHg; the cardiac output was 2.25 L/min by indirect Fick method (cardiac index, 1.54 L/min/m2); and the pulmonary vascular resistance (PVR) was 3.2 wood unit (WU). A very high level of PAWP plus relatively low PVR favored passive pulmonary hypertension. The absence of significant RV hypertrophy excluded cor pulmonale. We concluded that the reduced pulmonary function was reversible, provided that the heart function improved. The patient and his family members also preferred HTx to HLTx when informed about the survival period. Moreover, his blood type AB+ was more favorable to receive a heart donation in South Korea.

Based on this plan, the patient underwent the basic tests for heart transplantation, including detection of cancer and infections. As expected, after a short period of two weeks, he was donated the heart of a 57-year-old man. The donor was 160 cm tall, weighed 71 kg, and had an AB+ blood group. He had died of brain injury due to spontaneous subarachnoid bleeding. The total ischemic time was 2 hours and 26 minutes, and no special events took place during the surgery. Following heart transplantation, our patient was successfully extubated after 10 hours of intensive care unit care and transferred to the general ward on the 4th day after the operation.

Fortunately, no signs of RV dilation or compromised contractility were detected in the post-transplant echo. PVR by catheterization decreased from 3.2 to 1.6 WU. Interestingly, there was a dramatic rise in FVC and FEV1.0 in the PFT follow-ups, resolving the restrictive pattern. Fig. 2 shows serial follow-up PFTs after the surgery. FEV1.0/FVC at 10 days had also improved greatly. However, the subsequent ratios gradually dropped to 61% of the predicted value at 13 months. The percentage predicted value of FEV1.0 peaked at four months. Along with the improvements in test results, his clinical symptoms resolved as well and consented to the publication of his case.

Pulmonary function in HF patients has been investigated in several studies. In acute decompensated pulmonary edema, airflow obstruction is a typical feature, while restrictive ventilation predominates in chronic stable HF [6,7]. Airflow obstruction is caused by interstitial and submucosal edema compressing and obstructing the airways [8].

In contrast, restrictive ventilation in chronic stable HF is secondary to reduced ventilatory space due to cardiomegaly, pleural effusions, interstitial edema [9], respiratory muscle weakness [10], and interstitial remodeling [11]. Abnormal pulmonary vascular tone and structural remodeling cause an elevation in PVR [12]. This restrictive ventilation caused by the space-occupying mechanism of chronic HF is known to be completely reversible with normalization of cardiovascular physiology and anatomy, while irreversible pulmonary hypertension is a contraindication for heart transplantation [9]. Reversible pulmonary hypertension is associated with similarly good post-transplant survival outcomes and morbidity, regardless of its severity as observed in our patient [13].

Moreover, according to a report, PVR above 480–640 dynes s/cm–5 indicates a high risk for postoperative RV failure, which was not the case for our patient as his pretransplant PVR was 416 dynes s/cm–5 [14]. There was no noticeable improvement in FEV1.0/FVC at 13 months despite resolution of the congestion compressing the small airways. The speed of recovery for FEV1.0 was faster than that of FVC, but eventually, recovery of FVC caught up, returning the ratio to its prior value.

Consequently, our patient gained prolonged life expectancy with recovered pulmonary function to an unexpected level after receiving heart transplantation alone instead of a combined HLTx. In conclusion, meticulous investigations on disease status including imaging and invasive tests are warranted for differential diagnosis.