Background: The new kidney allocation system in the United States has introduced longevity matching, which gives priority to allocating the best quality organs to wait-listed candidates with the longest predicted survival for the efficient utilization of organs that are of limited availability. The estimated post-transplant survival (EPTS) score was developed in the United States to risk-stratify all wait-listed patients. However, prognostic indices used in Western countries were derived from data that may be different for Korea and do not necessarily reflect prognostic values for Korean deceased donor kidney transplantation. Prognostic indices for Korean wait-listed candidates therefore need to be developed from Korean data.
Methods: We analyzed 6,731 adult solitary kidney transplant patients for candidate risk prediction using the national data from the Korean Network for Organ Sharing (KONOS) and National Health Insurance Data Sharing Service (NHISS). Cox regression analysis was used to model the risk of patient death.
Results: The Korean EPTS (K-EPTS) score was developed based on four recipient parameters (age, diabetes mellitus, hepatitis C virus, and duration of dialysis) that showed a significant association with post-transplant survival. K-EPTS scores showed good discrimination (C-statistics: 0.690; 95% confidence interval, 0.666–0.715). Moreover, the ability of the K-EPTS score to discriminate patient survival was better than that of the EPTS according to the criteria of the United Network for Organ Sharing (US-EPTS) score (P<0.001).
Conclusions: The K-EPTS score, which was developed based on Korean national data, is expected to contribute to the assessment of recipient prognosis and efficient utilization of deceased donor kidneys.

A balance between equitable distribution and optimal utilization is necessary in organ allocation systems for deceased donor transplantations. A key feature of the new kidney allocation system in the US is the preferential allocation of best quality organs to wait-listed candidates with the longest predictive survival for efficient utilization of limited organ sources [1,2]. Several prognostic indices for deceased donor kidneys, including the kidney donor risk index and the kidney donor profile index (KDPI), have been developed for deceased donor kidney transplantation (DDKT) and are used for their allocation [1,3,4]. Furthermore, the estimated post-transplant survival (EPTS) score was developed in the US to risk-stratify all wait-listed patients [5]. The EPTS score considers patient age, prior organ transplantation, diabetes, and dialysis duration [6]. The EPTS score and KDPI have been introduced to the new kidney allocation system in the United States, and donor kidneys with a KDPI of 20% or less are allocated to the wait-listed candidates with an EPTS score of 20% or less for longevity matching [1,7].

Recently, the DDKT program has been activated in Korea. However, the waiting time in Korea is still much longer than in Western countries, because the increasing rate of end-stage kidney disease patients outnumbers organ donation rates [8-10]. Therefore, efficient and maximal utilization of the limited number of deceased donor organs is a very important issue in Korea. Therefore, adequate prognostic indices for wait-listed recipients as well as donor kidneys must be developed based on Korean data. This is because prognostic indices developed in Western countries, which have different characteristics from those developed Korea, do not necessarily have equivalent prognostic values for Korean DDKT. Herein, we have developed a predictive score for post-DDKT patient survival based on pre-transplant wait-listed candidate characteristics using the Korean nationwide database.

This study was approved by the Institutional Review Board (IRB No. E-1906-064-1040) of Seoul National University Hosptial and performed in accordance with the Helsinki Declaration (2000) and the Declaration of Istanbul (2008). The IRB waived the requirement for informed consent because this was a retrospective study.

We enrolled a nationwide cohort to develop a predictive model for recipient prognosis. The study used Korean Network for Organ Sharing (KONOS) data for all wait-listed candidates and transplant recipients, supplemented with comorbidity conditions (hypertension, diabetes), mortality information, and information on dialysis patients from the National Health Insurance Data Sharing Service (NHISS). Between January 1, 2010, and December 31, 2018, 7,166 end-stage kidney disease patients underwent DDKT in Korea. Recipients were excluded if they were under 18 years of age (n=95); underwent multi-organ transplantation at the same time as kidney transplantation (n=294); or had missing/invalid information about height, weight, or body mass index (n=46) (Fig. 1). 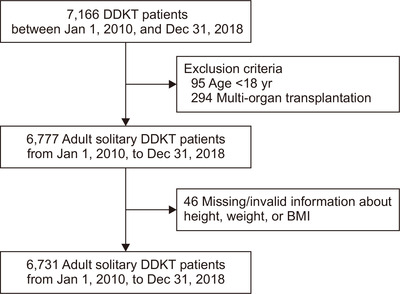 Continuous variables are expressed as mean±standard deviation, and categorical variables are expressed as percentages or frequencies. Mortality was estimated using the Kaplan-Meier method, and comparisons between groups were performed using a log-rank test. Statistical significance was defined as a two-tailed P-value of <0.05. To predict recipient prognosis, a Cox regression model was fitted to estimate the relative rate of mortality independently associated with recipient factors. Recipient factors included age; sex; weight; height; comorbidity conditions such as hypertension or diabetes mellitus; duration of dialysis; presence of hepatitis B virus (HBV) based on HBV surface antigen; and presence of hepatitis C virus (HCV) based on anti-HCV antibody. We determined model discrimination using a concordance (C) statistic to discriminate between subjects with different survival times. The value of C ranges from 0.5 (no discrimination) to 1.0 (perfect discrimination) [11]. The discrimination ability of the Korean estimated post-transplant survival (K-EPTS) score was compared with that of the EPTS according to the criteria of the United Network for Organ Sharing (US-EPTS) score using Uno’s concordance test [12]. All analyses were conducted using SAS ver. 9.4 (SAS Institute Inc., Cary, NC, USA).

The study population included 6,731 adult solitary DDKT recipients. Patients were followed up from the time of transplant until the earliest death, or until they were lost to follow-up, or until the conclusion of the observational period. The baseline characteristics of the patients are shown in Table 1. The mean age of recipients at transplantation was 49.6 years, and the majority of patients were male (62.8%). A history of prior solid organ transplantation was present in 459 patients (6.8%), 5,146 (76.5%) underwent hemodialysis before transplantation, and the mean duration of dialysis before transplantation was 4 years. Diabetes mellitus was present as a comorbidity in 5,412 (80.4%) patients, and 100 (1.5%) patients had HCV. There were 542 (8.1%) deaths and 438 (6.5%) graft losses among the 6,731 recipients in this cohort.

All available recipient-related variables potentially associated with mortality were included in the initial model. Our final model included recipient age of 50 years or older, diagnosis of diabetes mellitus as a comorbidity, duration of dialysis, and positive HCV, which were independently associated with mortality. The association between these factors and patient survival time after transplantation was determined by estimating a multivariable Cox proportional hazards regression model (Table 2). Based on this final model (Table 2), the K-EPTS score was developed as follows:

Table 2. Relative mortality risk after DDKT according to recipient-associated factors

To determine a candidate’s K-EPTS score, the raw K-EPTS score was calculated and converted to a cumulative percentage using the K-EPTS mapping table (Supplementary Table 1), which was based on all adult wait-listed patients for DDKT on July 31, 2019 (n=19,742). Supplementary Fig. 1 showed that distribution of raw K-EPTS scores in the reference population ranged from –4.23 to 2.64 (median, 0.12). Lower K-EPTS scores were associated with higher expected post-transplant longevity. 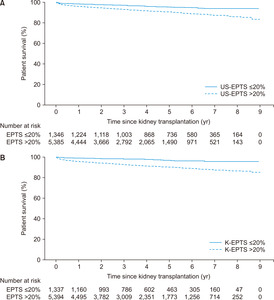 The new kidney allocation system in the US is basically a longevity matching allocation system, where the best-quality kidneys with the lowest KDPI are allocated to recipients with the lowest EPTS scores, that is, with the longest predicted post-transplant survival [1,2]. However, the US-EPTS scoring system is derived from the Scientific Registry of Transplant Recipients and might not be the best prognostic tool for Korean DDKT, which exhibit different characteristics, such as shorter cold ischemic time and longer waiting time. Therefore, this study developed the K-EPTS score, a prognostic prediction score based on Korean recipient characteristics, obtained from the Korean KONOS and NHISS nationwide databases. The K-EPTS score considers the candidate’s age, presence of diabetes mellitus, duration of dialysis, and HCV positivity, which were selected based on their independent and significant association with post-transplant patient survival. The K-EPTS score shares candidate age, diabetes mellitus status, and duration of dialysis with the US-EPTS score, whereas the K-EPTS score includes HCV instead of prior transplantation, in contrast to the US-EPTS score. The K-EPTS score, derived from Korean data, showed better discrimination ability for post-transplant survival in Korean DDKT than the US-EPTS score.

The discrimination C statistic of the K-EPTS score was 0.690, suggesting that there are additional predictors that may improve the ability to discriminate outcomes. However, we need a balance between simple decision-making from easily obtained predictors, which are available in a real clinical setting, versus better predictive power. In this sense, this 4-parameter-based K-EPTS scoring system is worth implementing for assessing recipient’s prognosis and making decisions about the allocation of deceased donor kidneys and acceptance of deceased donor kidney offers.

The Korean KDPI system, based on data obtained from Korean nationwide databases, has been officially adopted in the KONOS and will be used for national organ allocation from late 2021. However, there is a need for more discussion, both in society at large and in the transplantation community, about how the K-EPTS score could be incorporated into the national organ allocation system. For efficient utilization of deceased donor organs, good quality organs had better be allocated to wait-listed candidates with better expected post-transplant survival. However, equitable distribution is also an important consideration in the allocation of deceased donor organs that are of limited availability [14]. We therefore need social consensus for an appropriate balance between efficient utilization and equity. We hope that active discussion in our society will lead to social consensus and the development of a new allocation policy, which incorporates the K-EPTS score.

This study has a few limitations. Comorbidity data in our study were obtained from the NHISS, which may have resulted in comorbid conditions being over-reported. Most importantly, our prediction model has not been validated in independent cohorts. Future studies need to validate the K-EPTS score in other cohorts. Nevertheless, this study has important implications for the field of DDKT. The K-EPTS score was developed from Asian nationwide data with different characteristics from Western data, which have been used in most studies [15,16]. Therefore, the development and application of the K-EPTS scoring system for Korea could contribute to the development of new tailored EPTS scoring system in each country based on country-specific data.

In conclusion, the K-EPTS score, based on Korean nationwide data, is expected to contribute to the assessment of recipient prognosis and efficient utilization of deceased donor kidneys.

This study was supported by research grant from the Korean Society for Transplantation (2021-00-01004-012) and the Research Program funded by the Korean Centers for Disease Control and Prevention (2019-E8201-00).

We thank Soon Il Kim as the former chairman and Jongwon Ha as the current chairman of the Korean Society for Transplantation, for supporting this study. We also thank National Health Insurance Service for sharing database.