The “Act on hospice and palliative care and decisions on life-sustaining treatment for patients at the end of life” was enacted in February 2018 in Korea. Therefore, we suggest a Korean guideline for organ donation after circulatory death (DCD) category III after the withdrawal of life-sustaining treatment (WLST). Implementation of WLST includes stopping ventilation, extubation, discontinuation of inotropics and vasoconstrictors, cessation of continuous renal replacement therapy, and cessation of extracorporeal membrane oxygenation. Medical staff involved in organ procurement or transplantation surgery cannot participate in the WLST process. Following cardiac arrest, 5 minutes of “no touch time” should pass, after which circulatory death can be declared. The procurement team can enter the room after the declaration of death. The final procurement decision is made after the surgeon visually checks the organ condition. DCD category III activation in Korea will help increase organ donation and reduce the demand-supply mismatch of organ transplantation.

Organ transplantation is an effective treatment for prolonging the life of patients with end-stage organ failure and improving their quality of life [1]. There are two types of organ donations: living donation and cadaveric donation. Due to the “dead donor rule,” organ procurement must be done after a person has been declared dead in cadaveric donation [2]. For this reason, the concept of brain death was introduced.

Because of the increasing number of patients on the transplant waiting list, more donors are required [3]. Therefore, the concept of donation after circulatory death (DCD) has emerged to increase the number of donors [1]. The United States and European countries, including Spain and the United Kingdom, have been implementing DCD since 1980?2000. According to a report published in 2019, DCD is being implemented in 18 of 37 European countries [3]. In 2018, the proportion of DCD against overall donors increased by 28%, 19.9%, and 38.8% in Spain, the United States, and the United Kingdom, respectively [4].

As of December 2019, there were 40,253 people on the transplant waiting list in South Korea, but only 450 brain dead donors [5]. Due to this demand-supply mismatch, more attention is being given to DCD in South Korea. In South Korea, DCD could only be implemented in Maastricht classification IV (cardiac arrest in a brain-dead donor) [6]. There were only 34 cases of DCD in 2006?2015. Presently, organ donation involves only donors who have a cardiac arrest after the withdrawal of life-sustaining treatment (WLST), also known as Maastricht classification III [7,8], based on the “Act on hospice and palliative care and decisions on life-sustaining treatment for patients at the end of life,” that came into force in February 2018. Since then, the implementation rate of WLST has increased, with 30,000 patients in February 2019. Respiratory, cardiac, and brain diseases accounted for 26.5% of the patients [9]. Therefore, we can predict the possibility of DCD after WLST by analyzing patients whose families want to donate.

Moreover, if we create a paradigm shift in which WLST and subsequent organ donation are an option at the end of life, DCD in South Korea could be stimulated. Recently, South Korea has made efforts to incorporate DCD in organ donation and transplantation (Maastricht classification III), particularly after WLST. This would expand people’s options regarding donation and contribute towards organ donation and transplantation by increasing the number of DCD donors. In this review article, the authors suggest a Korean guideline for donor management of circulatory death after WLST, corresponding to DCD category III.

Table 1. Two criteria in the determination of death

Controlled DCD (Maastricht classification III) includes patients who cannot be resuscitated and undergo WLST following cardiac arrest, determination of death, and organ donation. The donation programs are well-developed in the United States, Canada, and the United Kingdom [8,11,12]. Since the “Act on hospice and palliative care and decisions on life-sustaining treatment for patients at the end of life” was enacted in February 2018, the number of patients undergoing WLST has steadily increased in 189 tertiary general and semi-general hospitals across South Korea [9,13].Among potential brain-death donors reported in 2019 (2,484 cases), only 15% (376 cases) families consented to WLST [14]. Therefore, there appears to be a potential to increase the number of donors. The process of DCD after WLSTs is summarized in Fig. 1. 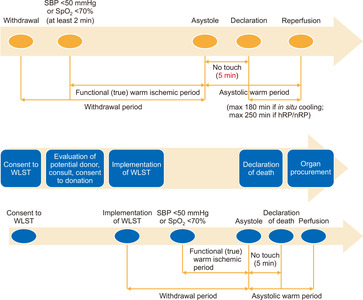 The Korean DCD research group was established in 2020 and consists of 20 members from several Korean hospitals. The definitions of these terms were determined by the voting of the members (Table 3) [15].

Table 3. Definitions of terms in the process of controlled DCD

Confirm the WLST implementation, explain the requirements listed below, and implement WLST: (1) stop the ventilator, (2) extubation, (3) discontinue inotropics and vasoconstrictors, (4) cease continuous renal replacement therapy, and (5) cease extracorporeal membrane oxygenation. Every step in DCD category III after the WLST must be based on the “Act on hospice and palliative care and decisions on life-sustaining treatment for patients at the end of life.” To decrease the warm ischemic period, we recommend executing (1) to (5) simultaneously.

WLST can be implemented in an intensive care unit (ICU) or operating room (OR). However, where possible, we recommend implementing WLST in an OR for rapid organ procurement. Before implementation, the operative field must be sterilized and draped. For anticoagulation, 20,000?30,000 IU (400 IU/kg) IV heparin need to be infused. After WLST implementation, the patients’ clinical status should be checked, including heart rate, blood pressure, respiratory rate, and oxygen saturation per minute (Fig. 2) [16]. If cardiac arrest does not occur within 90 minutes of WLST implementation, the donation process is halted, and the patient is transferred to the ICU to wait until cardiac arrest occurs [12,17]. 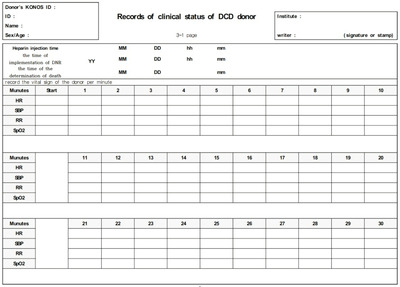 Medical staff involved in organ procurement or transplantation surgery cannot participate in the WLST decision-making process and declaration of death. From the cardiac arrest (systole), 5 minutes of “no touch time” should pass, after which death can be declared. As mentioned in the definition of asystole, the start of the “no touch time” is when the pulse wave is lost under invasive arterial blood pressure monitoring. Alternatively, if invasive arterial blood pressure monitoring is unavailable, the first time when the heart rate shows “zero” on an electrocardiogram can be used.

The procurement team should enter the OR after the declaration of death. The final procurement decision is made after a surgeon visually checks the condition of the organs. The functional warm ischemic time at which organic transplantation is possible is as follows: (1) lung: within 60 minutes, (2) liver: within 30 minutes, (3) pancreas: within 30 minutes, and (4) kidney: within 60 minutes.

The first case of organ transplantation from a controlled DCD after WLST was performed at the Korea University Anam Hospital in July 2020. The guidelines for DCD were drafted. This paper is a suggested guideline and a proposal. Based on this proposal, we need to determine the Korean DCD protocol. DCD category III activation in Korea will help increase organ donation and reduce the demand-supply mismatch of organ transplantation.