Enlarged stony-hard recipient livers are often observed in liver transplantation (LT) recipients, especially those with alcoholic liver disease. In such patients, recipient hepatectomy using the conventional surgical techniques is often demanding because of difficult dissection of the inferior vena cava (IVC) and excessive bleeding. A majority of surgeons majoring in LT have shared experience of hepatectomy for liver malignancies, thus they are accustomed to the anterior approach for hepatic resection in patients with huge hepatocellular carcinoma (HCC) located in the right liver [1,2]. As a change in the concept, it is possible to apply such a liver splitting technique during recipient hepatectomy, like the anterior approach for HCC resection. The recipient liver is meant to be removed, thus there is no limitation on the duration of hepatic inflow occlusion [3,4]. Such type of liver splitting under prolonged hepatic inflow occlusion would facilitate the recipient hepatectomy than conventional dissection techniques when detachment of the retrohepatic IVC from the liver appears to be exceptionally difficult. We herein present our experience of the recipient liver splitting technique used for living donor liver transplantation (LDLT) in a patient with alcoholic liver cirrhosis.

This study was approved by the Institutional Review Board of Asan Medical Center (IRB No. IRB No. 2020-0836), which waived the requirement for informed consent.

A 48-year-old male patient diagnosed with alcoholic liver cirrhosis was admitted to our institution due to acute-on-chronic liver failure (Fig. 1). Blood tests showed total bilirubin level of 26.7 mg/dL, creatinine level of 2.9 mg/dL, and prothrombin time-derived international normalized ratio of 1.75, thus making a Model for End-Stage Liver Disease (MELD) score of 35. This patient required inotropic agents to maintain his blood pressure, and thus he was cared for in the intensive care unit. This patient was enrolled into the Korean Network for Organ Sharing (KONOS) waitlist as the old KONOS category 2A. Because his condition had progressively deteriorated during waiting for priority allocation, we decided to perform LDLT.

The donor was the 21-year-old daughter of the patient. A modified right liver graft recovered from this donor weighed 760 g, making a graft-to-recipient weight ratio of 0.89%. The donor recovered uneventfully from the donor operation and was discharged at 9 days after the operation. During the recipient operation, we found that the native liver was stony-hard and heavily adherent to the retrohepatic IVC. During liver mobilization, diffuse oozing occurred from the dissected right liver surface and right subphrenic area, probably due to coagulopathy as a result of disseminated intravascular coagulation (DIC), which required more than 20 units of packed red blood cells (RBCs) until exposure of the right adrenal gland and partial dissection of the hepatoduodenal ligament. As a change in the concept, we decided to perform liver splitting of the recipient liver to facilitate dissection of the retrohepatic IVC.

The hepatoduodenal ligament was dissected according to the standard procedures of LDLT using a right liver graft. The proximal bile duct was transected above the bifurcation level. Hepatic arteries and the main portal vein were isolated. A vascular tourniquet was applied to the distal part of the dissected common hepatic artery and the main portal vein to interrupt the hepatic inflow as in the usual Pringle maneuver. We searched for the easiest plane of parenchymal transection for liver splitting, by which we recognized that the usual right hepatectomy or extended left hepatectomy plane was most suitable for liver splitting. Under the hepatic inflow occlusion, right-left liver splitting was performed along the right side of the middle hepatic vein. After the ventral half of parenchymal transection was completed, the left hepatic artery and the left portal vein were transected as in the usual extended left hepatectomy (Fig. 2A and B). The Spigelian lobe was detached from the IVC through a right-to-left sided approach. The left liver along with the caudate lobe was removed (Fig. 2C) and the left-middle hepatic vein trunk was temporarily closed by sutures. Detachment of the right liver from the IVC was continued through a left-to-right side approach under prolonged hepatic inflow control. Finally, the right liver was removed from the retrohepatic IVC. Approximately 10 units of packed RBCs were infused during the 60-minute-long procedures of the recipient’s liver splitting and removal. Approximately 20 minutes were needed for right-left hemihepatic parenchymal transection with Cavitron ultrasonic aspirator (CUSA). A total of 30 units of packed RBCs were infused during the whole recipient hepatectomy. 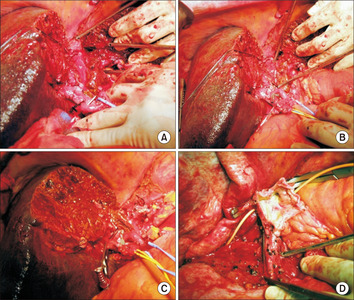 Figure 2. Intraoperative photographs. (A, B) Right-left hemiliver splitting along the usual plane of extended left hepatectomy or right hepatectomy was performed under hepatic inflow occlusion. (C) The left liver along with the caudate lobe was removed with temporary closure of the left-middle hepatic vein trunk. (D) The three hepatic vein stumps in the recipient inferior vena cava were widely open, and the left-sided edge was reinforced with an autologous saphenous vein patch.

Soon after recipient hepatectomy, a modified right liver graft was implanted according to the standard procedures of LDLT. The three hepatic vein stumps in the recipient IVC were widely open under total clamping of the IVC, and the left-sided edge of the unified hepatic vein opening was reinforced with suturing of an autologous saphenous vein patch (Fig. 2D). The graft right and middle hepatic veins were unified at the back table for unification quilt venoplasty. The graft hepatic vein stump was anastomosed with the enlarged hepatic vein opening at the IVC. The recipient portal bifurcation was used for anastomosis with the graft portal vein. The single right hepatic artery was reconstructed with the corresponding recipient right hepatic artery under surgical microscopy. Biliary reconstruction was performed as duct-to-duct anastomosis.

The DIC state was not controlled all along the recipient operation, and diffuse oozing occurred after graft implantation. As a result, the total intraoperative requirement of blood components was 58 units of packed RBCs, 47 units of fresh frozen plasma, and 20 units of platelet concentrate. The total operation time from skin incision to skin closure was 14 hours 30 minutes because it took many hours to achieve complete bleeding control. The total portal vein occlusion time in combination with intermittent release was approximately 140 minutes, including recipient liver splitting and graft implantation.

The pathology report of the explant liver showed that there was massive hepatic necrosis with fatty change and cholestasis, which was compatible with alcoholic fulminant liver failure. The patient recovered uneventfully from the LDLT operation (Fig. 3A). The general condition of the patient progressively improved, and finally the patient was discharged 50 days after LDLT. The patient has been doing well for 14 years after LDLT (Fig. 3B).

During the LT operation, excessive bleeding is one of the most serious problems. However, it occurs frequently due to impaired coagulation profiles and difficult hepatic dissection. We have performed more than 5,000 LDLT operations [5], in which a considerable proportion of recipients received high-volume transfusion due to massive intraoperative bleeding. The real-world situation of intraoperative bleeding during LDLT is different from that of deceased donor LT because the retrohepatic IVC needs to be completely preserved through a piggyback technique and all perihilar structures need to be meticulously dissected to preserve the small hepatic artery branches and hilar bile duct openings [6]. Massive bleeding and subsequent transfusion can cause various negative impacts on intraoperative management and posttransplant recovery [7]. Thus, it is highly recommended to minimize the intraoperative blood loss [8,9].

The risk factors for intraoperative bleeding during the LT operation have been assessed in many studies. The MELD score is reported to be one of the important risk factors for massive transfusion [10]. Intraoperative cell salvage with autologous transfusion using a cell saver machine is effective in managing massive bleeding [11]. If liver cirrhosis is advanced with overt portal hypertension along poor development of portal collaterals, a considerable amount of bleeding inevitably occurs. Effective prevention of excessive bleeding is a matter of major concern during liver surgery including LT operation. Various surgical techniques, including the pinch-burn-cut techniques, high hilar dissection, and dissection with energy devices have been developed to reduce intraoperative bleeding during the LT operation [12,13]. We also reported the benefits of prolonged hepatic inflow occlusion during the LDLT operation [3,4], in which prolonged inflow occlusion was effective in reducing bleeding during hepatic mobilization and dissection. However, prolonged prehepatic portal venous congestion or sinistral portal hypertension can be a potential risk factor for acute pancreatitis [14], thus irrelevant prolonged inflow occlusion is not recommended, especially in patients without portal vein collaterals.

The present case was performed in the era before the development of the current concept of prolonged hepatic inflow occlusion, but its background idea was identical with the current concepts. We have recently presented that occlusion of the hepatoduodenal ligament in LT recipients works as a stop-gap to weaken the bleeding-prone effect from portal hypertension [6,7]. If brisk bleeding occurs after damage of venous collaterals around the liver, it is usually difficult to achieve local bleeding control immediately. If venous collaterals exist proximal to the main portal vein, occlusion of the hepatoduodenal ligament will prevent bleeding. In patients with portal hypertension, there may be collaterals to compensate for portal hypertension. Such a situation may prevent potential inflow occlusion-induced splanchnic congestion because portal blood flow will bypass through the preexisting collaterals.

However, in real-world LT practice, recipient liver splitting has been rarely performed probably because many surgeons think that recipient hepatectomy can be performed through other methods. One of the preferred methods is total hepatic vascular exclusion. It has not been frequently performed during hepatobiliary surgery [15], but it is a part of essential procedures for LT. Another method is application of portal flow bypass using active venovenous bypass, in which the hepatoduodenal ligament can be totally transected without the risk of splanchnic congestion and the IVC can be clamped for a prolonged period without risk of vital sign instability. Our recipient liver splitting technique cannot be applicable to patients with HCC, but these two methods can be useful regardless of HCC. Instead of the usual right-sided approach or recipient liver splitting, recipient hepatectomy through a left-sided approach under hepatoduodenal ligament occlusion can be used. This procedure facilitates dissection of the left liver and spigelian lobe from the retrohepatic IVC, thus the operation time and intraoperative bleeding can be reduced.

In conclusion, we think that recipient liver splitting is a feasible technical option for coping with difficult recipient hepatectomy, especially in patients with an enlarged stony-hard liver and heavy adhesion around the retrohepatic IVC.