Background: Kidney transplantation (KT) is regarded as the most effective treatment for end-stage renal disease. The annual number of KT cases in South Korea has increased rapidly as more centers are implementing a transplantation program. The objective of this study was to determine clinical outcomes of the first 300 consecutive cases of KT in a single center.

Methods: Clinical data of 300 cases of KT at Seoul National University Bundang Hospital from January 2004 to March 2018 were obtained from a prospectively collected database and retrospectively reviewed.

Results: The mean age of patients was 47.7±12.9 years, and 59% of patients were male. There were 225 living donors and 75 deceased donors. A total of 42 cases were from ABO-incompatible donors. During a mean follow-up of 68.6±43.5 months, 38 patients (12.7%) experienced rejection. The most common cause was acute T-cell mediated rejection (9.0%). Eighteen patients experienced graft loss. One-year and 5-year death-censored graft survival rates were 99% and 96.6%, respectively. One-year and 5-year patient survival rates were 98.3% and 96.6%, respectively. Multivariate analysis revealed that graft weight-to-recipient weight ratio and rejection were significant factors affecting graft survival.

Conclusions: This single-center review demonstrates clinical outcomes comparable to other major centers. Such good outcomes were obtained by good patient selection, dedicated transplant physicians, and adequate use of immunosuppressive therapy.

The first kidney transplantation in South Korea was performed in 1969. The significant benefit of kidney transplantation over dialysis in terms of quality of life and life expectancy has led to a rapid rise in transplant cases nationwide to over 2,100 cases annually in 2018. Despite the increase of transplant cases, the number of patients on the waiting list is increasing more rapidly each year due to the increased prevalence of chronic kidney disease [1,2]. Approaches to increase potential donor groups such as ABO-incompatible (ABOi) donors [3], extended criteria donors (ECD) [4], and donation after cardiac death (DCD) [5,6] are being implemented to overcome the organ shortage problem. Outcomes of these approaches have been shown to be acceptable compared to donation after brain death (DBD) and are superior to waiting for a DBD kidney [7]. Nonetheless, the mean time for waiting has continuously increased because organ demand has far exceeded organ supply. Despite an organ shortage, the number of kidney transplant cases performed nationwide and the number of centers performing kidney transplantation have increased with many new centers performing less than 50 cases per year. Cases performed at large-volume centers still constitute over 50% of total transplantation cases in South Korea up to date, although the number of cases performed by low-volume centers is constantly increasing [1].

The first case of kidney transplantation in Seoul National University Bundang Hospital (SNUBH) was performed in 2005. The number of cases gradually increased afterwards, from 12 cases in 2005 to 52 cases in 2018. We herein describe our experience with the first 300 consecutive cases of kidney transplantation with the aim to determine and share clinical outcomes in terms of complications, graft survival, and patient survival. Independent factors affecting graft survival were also determined.

This retrospective analysis was conducted in compliance with principles of the Declaration of Helsinki. This study was approved by the Institutional Review Board of Seoul National University Bundang Hospital, Korea (IRB No. B-2006-616-123).

Initial maintenance immunosuppressive agents included calcineurin inhibitors, antimetabolites, and corticosteroids. All agents were started two days prior to transplantation for living donors and on the day of transplantation for deceased donors. Calcineurin inhibitors were administered at a dose of 0.07 mg/kg for tacrolimus (Prograf; Astellas Pharma Inc., Toyama, Japan) or 3 mg/kg for cyclosporine (Sandimmune; R.P. Scherer, Eberbach, Germany) twice a day. Tacrolimus was adjusted to a target level of 9–13 ng/mL and cyclosporine was adjusted to a target level of 300 ng/mL until postoperative 4 weeks. In cases that used ATG as the induction agent, tacrolimus dosage was reduced to 0.035 mg/kg during ATG use. As an antimetabolite, 500–750 mg of mycophenolate mofetil (CellCept; F. Hoffmann-La Roche, Basel, Switzerland), or 360–540 mg of mycophenolic acid (Myfortic, Novartis) was administered twice a day. Intravenous methylprednisolone was tapered to a dose of 20 mg per day on postoperative day 6. This dosage was maintained until discharge.

Rejection was suspected when a patient’s serum creatinine level did not show adequate decline postoperatively or became elevated without other possible causes such as dehydration or infection. Renal biopsy was performed in such cases under the guidance of ultrasonography. Borderline changes that were not consistent with serum creatinine levels were considered subclinical rejection, and in such cases, no specific treatment was used. Steroid pulse therapy was started before biopsy results were obtained when rejection was highly suspected clinically. Biopsy-proven acute rejections were treated primarily by using steroid pulse therapy, while ATG antibody was administered when patients were found to be refractory to steroid treatment. When B-cell mediated rejection was confirmed, IVIG and/or plasmapheresis was given.

Characteristics of the first 300 patients included in this study are shown in Table 1. Among these 300 cases, 225 (75%) were living donor kidney transplantation (LDKT) and 75 (25%) were DDKT. Of these 300 cases, 177 recipients (59%) were male and 123 recipients (41%) were female. Of the 300 donors, 148 (49.3%) were male and 152 (50.7%) were female. Regarding the etiology, diabetic nephropathy accounted for the highest percentage (78 cases, 26%), followed by glomerulonephritis (73 cases, 24.3%) and IgA nephropathy (40 cases, 13.3%). Pretransplant renal replacement was performed for 214 (71.3%) recipients. The mean duration of pretransplant renal replacement was 7.87 months for LDKT recipients and 84.14 months for DDKT recipients. Regarding HLA matching, 7.3% of transplant pairs had full HLA match while 10.7% of them had total mismatch. For induction therapy, basiliximab was administered in 235 (78.3%) cases and ATG was administered in 10 (3.3%) high-risk patients. All patients received triple maintenance immunosuppressive agents (calcineurin inhibitor, antimetabolite, and steroid). 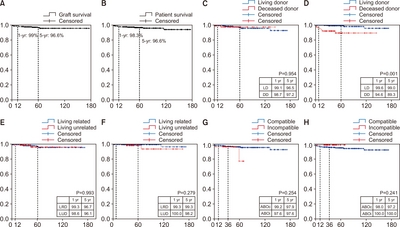 The first case of ABO-incompatible kidney transplantation (ABOi-KT) was performed in 2013. Since then, the annual number of cases has increased to 17 in 2017. The median follow-up period of ABOi-KT was 37.7 months (data not shown). Among the 42 cases of kidney transplantation with ABOi pairs, 22 (52.4%), eight (19%), seven (16.7%), and five (11.9%) cases of donors were spouse, offspring, siblings, and parents, respectively (data not shown). The mean number of HLA mismatch was 3.12±1.64 in ABO-compatible kidney transplantation (ABOc-KT) and 3.52±1.82 in ABOi-KT (P=0.152, data not shown). Initial anti-A/B antibody titer ranged from 1:2 to 1:256 with a median titer of 1:16 (Table 1). Except for five ABOi-recipients who did not receive plasmapheresis, the rest of the ABOi-recipients received rituximab, IVIG, and plasmapheresis. Preoperative anti-A/B antibody titer after desensitization ranged from negative to 1:16, with a median titer of 1:4 (Table 1). Regarding outcomes compared to ABOc-KT, 3-year graft survival rate and patient survival rate were analyzed since median follow-up after ABOi-KT was only 34 months. ABOi-KT showed no inferiority in terms of graft survival (1-year or 3-year, P=0.254) (Fig. 2G) and patient survival (1-year or 3-year, P=0.241) (Fig. 2H).

Outcomes and complications at postoperative 4 weeks after kidney transplantation are shown in Table 3. Infection was the most common complication. Urinary tract infection was the leading cause of bacterial infection (66 cases), followed by pneumonia (7 cases) and prostatitis (3 cases). Other complications included septic arthritis, Nocardiosis, and acute gastroenteritis. (35 cases), (18 cases), (9 cases), and (3 cases) were found to be the most common pathogens. The most common viral pathogen was CMV (32 cases), followed by BK virus (22 cases), varicella-zoster virus (9 cases), and influenza (8 cases). was observed in eight patients. Other fungal infections including lung abscess and cervicofacial abscess were observed in two patients.

Rejection was suspected in 54 cases, of which 38 cases were biopsy proven. Acute cellular rejection was the most common type (71.1%), followed by antibody mediated rejection (7.9%). Among clinical rejections, a total of 48 patients underwent treatment. The most common treatment was steroid pulse therapy (45 patients), followed by administration of rituximab (2 patients) and anti-thymocyte antibody (1 patient). Among biopsy-proven rejections, 36 cases were rescued while two cases had graft failure due to acute cellular rejection and acute T-cell-mediated rejection, respectively.

During a median follow-up period of 52 months, graft failure was observed in 18 patients (Table 3). The most common cause was death, followed by noncompliance and acute rejection. Seven deaths were determined as death with functioning graft. Death-censored graft survival rates at 1 year and 5 years were 99.0% and 96.6%, respectively. Patient survival rates at 1 year and 5 years were 98.3% and 96.6%, respectively (Fig. 2A and B). As of December 2019, there were a total of 11 deaths during follow-up. The most common cause of death was infection, including two cases of pneumonia, one case of urinary tract infection, and one case of infective endocarditis. The second most common cause of mortality was cardiovascular event, including one case of hypertrophic myocarditis and one case of cardiac arrest. One death was due to malignancy (cholangiocarcinoma). Two deaths were due to an unknown cause. One death was due to bleeding and another death was due to ischemic colitis.

The first ABOi-KT was performed in 2013. Since then, the proportion of ABOi-KT has risen to 31.3% in 2017, which was higher than the national proportion of 25.6% in 2017 [1]. Kosoku et al. [17] reported a propensity score matched retrospective analysis of 66 cases of ABOi-KT over 17 years and concluded that ABOi-KT was an acceptable treatment of choice for ESRD patients even at low-volume centers. There were only 42 cases of ABOi-KT among the first 300 cases in SNUBH. However, the outcome was comparable to preceding studies. Shin et al. [18] reported that death-censored graft survival rates of ABOi recipients at 1 year and 3 years were 98.6% and 98.6%, and patient survival rates at 1 year and 3 years were 97.3% and 95.9%, respectively. Recently, Scurt et al. [19] performed a meta-analysis and found that ABOi-KT within the first 3 years after transplantation had poorer outcomes than ABOc-KT, although equivalent outcomes were achieved at 5 years after transplantation. However, our results showed that 1-year and 3-year graft survival rates of ABOi-KT were not inferior to those of ABOc-KT. In addition, 1-year and 3-year patient survival rates of ABOi-KT were comparable to those of ABOc-KT. We suggest that this result might be due to strict control of preoperative anti-A/B antibody titer (under 1:8). However, our results were obtained from data with a relatively short median follow-up and small number of cases. Thus, a greater number of cases and longer follow-up are needed to compare short-term and long-term outcomes of ABOi-KT and ABOc-KT. Williams et al. [20,21] showed that HLA mismatch was a significant risk factor for graft failure in both living donors and deceased donors. However, in the present study, HLA mismatch was not an independent risk factor for graft failure (P=0.726) (Table 5). Such difference in results might be due to active use of immunosuppression in the present study. Among 245 patients (81.7%) who underwent induction therapy, 235 (78.3%) received basiliximab.

Postoperatively, incidence of bacterial infection and viral infection were 26.3% and 24.3%, respectively. These incidences were lower than those reported in prior studies [12,14,25]. Urinary tract infection was the most common infection, followed by pneumonia and prostatitis. Regarding viral infection, we have previously reported our experience on BK virus infection in kidney transplant recipients [26]. Cumulative incidence of BK virus infection slightly increased from 6.5% to 7.3%, whereas no additional graft loss or dysfunction was observed afterwards. Although the incidence increased, it was similar to the incidence range of 5.3%–8% reported in previous studies [27,28]. Stronger immunosuppression is known to inevitably cause a higher BK virus infection rate [29], but since no additional graft loss was identified despite an increased incidence of BK nephropathy over time, we suggest that our accumulated experience led to an overall adequate use of immunosuppressive therapy.

In summary, 1-year and 5-year overall death-censored graft survival rates were 99% and 96.6%, respectively, comparable to outcomes of other major centers. We suggest that with careful donor selection, dedicated transplant physicians, and adequate use of immunosuppressants, low-volume centers can also stably perform KT and achieve good outcomes. Although we have accumulated experience with ABOi-KT, we have limited experience with expanded donors and DCD donors, who we plan to include as we broaden our focus in the near future.

We would like to thank Seoul National University Bundang Hospital transplant coordinators Su Jin Jo and Seon Young Jeon for their contribution with data collection.