Successful treatment of renal malakoplakia via the reduction of immunosuppression and antimicrobial therapy after kidney transplantation: a case report

Malakoplakia is a rare, granulomatous disease that usually affects immunocompromised individuals and is generally associated with poor graft and patient survival. We present a case of renal malakoplakia after kidney transplantation (KT). A 33-year-old female patient with chronic kidney disease underwent living-donor KT at Severance Hospital. The patient was administered 375 mg/m2 rituximab due to high panel reactive antibodies. Immunosuppression was initiated with 1.5 mg/kg anti-thymocyte globulin and intravenous methylprednisolone and maintained with tacrolimus, oral methylprednisolone, and mycophenolate mofetil (MMF). Six months after KT, the patient was hospitalized for a urinary tract infection with an elevated serum creatinine level of 3.14 mg/dL. Renal biopsy revealed malakoplakia involving the renal parenchyma. Upon this diagnosis, the dose of tacrolimus was reduced and MMF was stopped. Fluoroquinolone was used for 16 days, and the trimethoprim/sulfamethoxazole dose was doubled for 6 days. The patient was hospitalized for 3 weeks and closely observed during outpatient visits. Follow-up ultrasonography revealed mass-like lesions of renal malakoplakia, which disappeared 5 months after diagnosis. The serum creatinine level decreased to 1.29 mg/dL 28 months after diagnosis. Our results suggest that renal malakoplakia can be successfully treated by the reduction of immunosuppression and sustained antimicrobial therapy.

Malakoplakia is a rare, granulomatous disease that usually affects immunocompromised individuals. The genitourinary tract is the most frequent site of infection, which manifests as recurrent urinary tract infections (UTIs) [1]. In some cases, the infection impairs renal function. Since kidney transplant recipients are immunocompromised and susceptible to UTIs, the occurrence of malakoplakia in kidney transplant recipients has been reported in recent years. We report the successful treatment of a case of renal malakoplakia after kidney transplantation (KT) by the reduction of immunosuppression and antimicrobial therapy.

All study procedures were conducted in accordance with the Declaration of Helsinki and were approved by the Institutional Review Board of Severance Hospital (IRB No. 4-2022-1046) and informed consent for waived.

The patient was a 33-year-old woman with a 10-year history of glomerulonephritis and a diagnosis of grade 5 chronic kidney disease. In March 2020, she underwent robot-assisted living-donor KT. The graft was matched to one haplotype, and the patient was sensitized (panel reactive antibody class I: 55% donor-specific antibody B39, mean fluorescence intensity 8,648). She was administered 375 mg/m2 rituximab for desensitization and 1.5 mg/kg anti-thymocyte globulin (ATG) with intravenous methylprednisolone to induce immunosuppression, which was maintained with tacrolimus, oral methylprednisolone, and mycophenolate mofetil (MMF). Initially, 0.1 mg/kg tacrolimus was administered orally twice daily. Subsequent doses were adjusted to maintain a target trough concentration of 5–8 ng/mL. The initial dose of intravenous methylprednisolone (500 mg) was tapered to 10 mg/day of oral prednisolone for the first 3 weeks after transplantation. The starting dose of MMF was 1.0 g/day and was adjusted to reduce side effects such as gastrointestinal troubles or leukopenia. In addition, trimethoprim/sulfamethoxazole (TMP/SMX) was prescribed to prevent infection (400 mg/80 mg, daily). Despite experiencing ATG-induced leukopenia, the patient recovered well and was discharged on postoperative day 8 with decreased serum creatinine levels.

She remained well for 6 months after KT until she experienced a UTI with a high serum creatinine level of 3.14 mg/dL. She was hospitalized, and a random urine culture revealed the presence of and a positive test for cytomegalovirus (CMV) infection. She was given cefepime with metronidazole and ganciclovir to manage the UTI and CMV infection, respectively.

In addition, an immunohistochemical stain of a renal biopsy specimen revealed the infiltration of macrophages into the glomerular interstitium. Although the von Kossa stain was negative, the macrophages contained periodic acid-Schiff–positive granules and CD68 was positive, which was sufficient for a diagnosis of malakoplakia of the renal parenchyma (Fig. 1).

Upon this diagnosis, the dose of tacrolimus was reduced to maintain trough levels of 3–6 ng/mL, and MMF was discontinued (Fig. 2). However, the 10-mg/day dose of oral methylprednisolone was maintained. As for the antibiotics, cefepime was continued, metronidazole was replaced with ciprofloxacin for 13 days, and the dose of TMP/SMX was doubled (800/160 mg) for 6 days. A follow-up renal biopsy was performed 10 days after the initial renal biopsy. Doppler ultrasonography revealed increased cortical echogenicity and an enlarged graft, which confirmed the diagnosis of acute T-cell-mediated rejection (TCMR; Banff IA) in addition to malakoplakia. Methylprednisolone pulse therapy (250 mg/day) was promptly begun to treat the acute TCMR. Cystoscopy was performed to look for malakoplakia lesions but showed no pathologic findings. After 6 days of steroid pulse therapy, the patient’s renal function improved. Her hospitalization lasted for 3 weeks, and she was discharged with oral ciprofloxacin, TMP/SMX (at the original prophylactic dose), oral methylprednisolone, and a reduced dose of tacrolimus without MMF (Fig. 3). 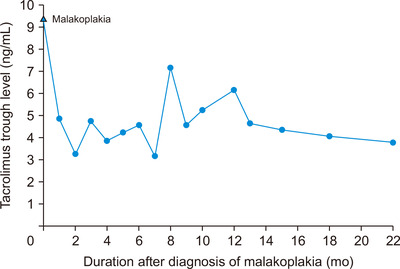 At an outpatient clinic visit, Doppler ultrasonography identified abscess-like lesions on her kidney, which were thought to be related to malakoplakia (Fig. 4). One lesion was 5.8 cm on the upper pole of the graft, and the other was 4.4 cm on the middle part of the graft. These lesions were monitored thereafter and disappeared 5 months later. The serum creatinine level also returned to 1.29 mg/dL 28 months later (Fig. 5). Since then, she has been in good health and has a functioning graft. 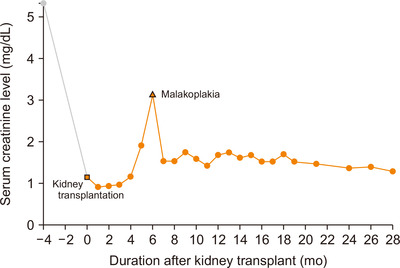 Malakoplakia is an uncommon granulomatous inflammatory condition that results from immunosuppression. Forty percent of cases are associated with immunosuppression as a result of medication, malignant disease, chronic alcohol intake, autoimmunity, or overall weakness [2].

Involvement of the renal parenchyma is common in cases of malakoplakia associated with KT. The most prevalent type of bacterium associated with malakoplakia is [3]. Clinically, renal malakoplakia manifests as fever and flank pain with UTI symptoms and can frequently mimic other renal diseases [4,5]. It is believed that reduced levels of cyclic guanosine monophosphate (cGMP) in monocytes due to immunosuppression result in incomplete lysosomal clearance and the formation of bacterial residue in macrophages [6,7]; such a lesion is described as a granulomatous reaction with Michaelis-Gutmann bodies [8]. These large macrophages with Michaelis-Gutmann bodies are called von Hansemann cells and appear with a polygonal shape and eosinophilic cytoplasm on microscopy.

With the development of antibiotics, the prognosis for patients with malakoplakia has improved over time [9]. Unfortunately, standard guidelines for the treatment of malakoplakia have not yet been developed. However, due to monocyte suppression, the use of immunosuppressants—particularly purine synthesis inhibitors (e.g., MMF)—should be limited during the initial treatment [10]. The use of antibiotics is a crucial component of the treatment regimen. TMP/SMX and fluoroquinolone are preferred due to their ability to accumulate inside macrophages. In addition, Abdou et al. [6] reported the beneficial effects of increasing cGMP levels with bethanechol chloride during the treatment of malakoplakia. Refractory malakoplakia can be treated with surgical resection of the lesion accompanied by the prolonged use of antibiotics [3].

Although our patient suffered acute cellular rejection grade IA due to the reduction of immunosuppression, she successfully recovered from malakoplakia. Neither bethanechol chloride nor the surgical procedure was necessary. Since the patient is susceptible to recurrent UTIs, she will be closely monitored for UTI symptoms.

This case suggests that the successful treatment of renal malakoplakia can be achieved via the reduction of immunosuppression and adequate antimicrobial therapy. Further study is needed to establish a standard treatment regimen for malakoplakia after KT.

No potential conflicts of interest relevant to this article are reported.