A 61-year-old female patient with chronic kidney disease due to diabetes mellitus and hypertension–induced nephropathy received a deceased donor kidney transplant in March 2020. In July 2020, she was transferred from a local hospital due to the exacerbation of general weakness and diarrhea. Upon her arrival, we noticed a high level of serum creatinine (sCr) of 1.5 mg/dL and a decrease in urine output. Her laboratory results indicated significant hemolysis, with a hemoglobin level of 7.0 g/dL, platelet count of 20 ×103/μL, and a lactate dehydrogenase level of 3,207 IU/L. Kidney biopsy showed severe thrombotic microangiopathy without any evidence of acute rejection. Under the impression of atypical hemolytic uremic syndrome (aHUS), we immediately started plasmapheresis and hemodialysis for anuria. Eculizumab was considered as a kidney graft rescue therapy since her sCr level was not effectively decreased, and her anuria continued despite hemodialysis and plasmapheresis. Eculizumab (900 mg) was administered weekly for 4 weeks. An additional 600 mg of eculizumab was administered on the day of plasmapheresis. Since the patient’s laboratory data gradually improved, hemodialysis and plasmapheresis were ceased on admission day 37. After that, eculizumab was administered biweekly (1,200 mg) two more times. The patient’s sCr and platelet count normalized after 2 months of eculizumab treatment. Based on our experience, a shorter interval between the clinical diagnosis of aHUS and administration of eculizumab increases the likelihood of rescuing the kidney.

Atypical hemolytic uremic syndrome (aHUS) is a rare life-threatening disease caused by hyperactivation and dysregulation of the alternative complement pathway that is characterized by thrombotic microangiopathy (TMA) and acute kidney failure [1,2]. aHUS can be chronic, hereditary, or idiopathic, whereas typical HUS is often caused by infection with a certain strain that produces a potent Shiga-like exotoxin. Overall, aHUS is relatively uncommon, accounting for only 5% of all HUS cases. However, it is known to have worse outcomes than typical HUS [2,3].

aHUS after kidney transplantation (KT) can cause irreversible graft failure. It may occur as a recurrent or disease. aHUS occurs in 1%–5% of KT recipients. It occurs most frequently within the first 3 months after transplantation [3]. Several studies have reported a 1%–14% incidence of post-KT aHUS, with thrombocytopenia or hemolytic anemia and TMA observed on biopsy [2,4,5]. TMA is often triggered by immunosuppressive drugs. It can cause severe complications such as graft failure among KT patients [2,3,6]. Before the development of eculizumab (Soliris; Alexion Pharmaceuticals, Boston, MA, USA), a humanized monoclonal antibody against complement C5, the treatment of aHUS was focused on excluding reversible causes and plasmapheresis. Plasmapheresis may maintain a normal platelet count and lactate dehydrogenase (LDH) level in patients, but dysregulation of the complement pathway and TMA can be sustained [7]. Although there are no treatment guidelines for or recurrent post-KT aHUS, some studies have shown an association between early administration of eculizumab with better results and prognosis [1,8]. Herein, we report a case of a KT patient with aHUS, which was salvaged with early administration of eculizumab.

This study was approved by the Institutional Review Board of Korea University Medical Center (IRB No. 2022AN0185), which waived the requirement for informed consent due to the retrospective nature of this study.

A 61-year-old female patient with chronic kidney disease (CKD) due to diabetes mellitus and hypertension-induced nephropathy received a deceased donor kidney transplant in March 2020 from a 61-year-old male with 1/8 human leukocyte antigen mismatch. Basiliximab was used as the induction therapy. Tacrolimus, mycophenolate mofetil (MMF), and methylprednisolone comprised the maintenance immunosuppressive regimen. She was discharged 10 days after with normal kidney function (serum creatinine [sCr], 0.74 mg/dL). Four months later, on postoperative day 122, she was transferred from a local hospital for the exacerbation of general weakness and diarrhea after 3 days of conservative care. Upon her arrival, we noticed a high level of sCr (1.5 mg/dL) and a significant decrease in urine output. Her laboratory results indicated significant hemolysis, with a hemoglobin level of 7.0 g/dL a platelet count of 20 ×103/μL, and an LDH level of 3,207 IU/L. In addition, a peripheral blood smear showed schistocytes. A disintegrin and metalloproteinase with thrombospondin type 1 motif, member 13 (ADAMTS-13) activity was within the normal range (Table 1). Stool culture was negative. Kidney biopsy was performed to rule out acute rejection, and the biopsy results showed severe TMA without evidence of acute rejection (Fig. 1). There was no microvascular inflammation, such as glomerular inflammatory infiltrate or peritubular capillary inflammatory infiltrate, and C4d immunohistochemical staining was negative. Thus, according to the 2019 Banff classification, acute antibody-mediated rejection was excluded. Under the impression of aHUS, we replaced tacrolimus with sirolimus and immediately started plasmapheresis. Hemodialysis was also initiated for anuria. At the same time, we requested approval of eculizumab from the Health Insurance Review and Assessment Service (HIRA). As the cost of eculizumab is very high, in order to be covered by public insurance, it is necessary to obtain approval from the HIRA before its used in Korea. Eculizumab was considered as a kidney graft rescue therapy since plasmapheresis did not effectively decrease the patient’s sCr levels and anuria continued despite plasmapheresis (Table 2). Vaccination against meningococcal disease was performed on admission day 9 and the use of eculizumab was approved by HIRA on admission day 10. Immediately after approval for use, eculizumab (900 mg) was administered weekly for 4 weeks. An additional 600 mg of eculizumab was administered on the day of plasmapheresis. Since the patient’s laboratory parameters gradually improved, hemodialysis and plasmapheresis were ceased on admission day 37. After that, 1,200 mg of eculizumab was administered biweekly two more times until HIRA recommended cessation (Fig. 2). At the time of discharge, the patient’s platelet count had recovered to 236 ×103/μL, the LDH level had decreased to 1,379 IU/L, and sCr had decreased to 2.05 mg/dL (Fig. 3). We continued to use MMF and steroid therapy, including sirolimus, which replaced tacrolimus, as maintenance immunosuppressants. The trough level of sirolimus was around 4 to 6 mg/dL. Based on the patient’s laboratory data and clinical signs, we determined that she had recovered from aHUS without significant adverse effects except for an asymptomatic urinary tract infection. The most recent laboratory results at 2 years after KT showed a platelet count of 335 ×103/μL, sCr level of 1.32 mg/dL, and LDH level of 420 IU/L.

Table 1. Results of laboratory tests on the day of arrival 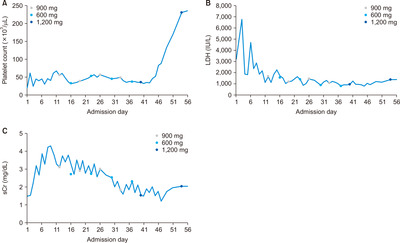 Figure 3. Improvements in (A) platelet count, (B) lactate dehydrogenase (LDH), and (C) serum creatinine (sCr) during 8 weeks of eculizumab treatment.

aHUS after KT is most often diagnosed in the first 3 to 6 months. TMA might be associated with several factors combined with KT that are known to cause severe damage to the graft endothelium [3,4]. Both cyclosporin and tacrolimus are associated with increased plasma levels of indicators of endothelial injury, such as von Willebrand factor and circulating endothelial cells [3]. Long-term calcineurin inhibitor (CNI)-associated ischemia can induce endothelial damage and initiate processes associated with the pathogenesis of TMA [3,6,9]. TMA also often occurs due to the high CNI trough levels targeted during this period [4,6,9]. Therefore, it is generally known that when TMA occurs, CNI is reduced, withdrawn, or converted to sirolimus [6]. Moreover, the use of donors after cardiac death has been associated with posttransplant TMA. Viral infections, such as cytomegalovirus, parvovirus B19, and polyoma BK virus, have been associated with aHUS. Viruses have been shown to induce primitive chronic endothelial dysfunction and trigger specific cytotoxic immune responses that target endothelial cells [3,10]. No viral infection was found during our patient’s admission. In addition, zero-time biopsy showed no evidence of TMA. One week before our patient’s re-admission, her tacrolimus level was 9.4 ng/dL. However, her tacrolimus level increased to 29.6 ng/dL after admission. Her kidney function continued to deteriorate, and her kidney biopsy performed on admission day 2 showed evidence of TMA. A diagnosis of post-KT aHUS was made, and treatment with plasmapheresis was initiated.

The pathogenic mechanisms of TMA are not well understood. However, Le Quintrec et al. [11] identified complement mutations in 29% of cases of TMA after KT. They provided a rationale for complement inhibitor therapy and stated that measurements of serum C3 and C4 levels can provide important diagnostic information in the evaluation of patients with kidney disease. TMA in aHUS can also lead to severe morbidity. Up to 56% of adult patients who receive plasmapheresis progress to CKD [7,12]. In addition, 40% to 50% of patients lose their graft within 2 years of diagnosis [10]. Since there are no treatment guidelines for or recurrent post-KT aHUS, all treatments are usually implemented in a step-wise fashion. These treatments remain a matter of debate. Some studies have suggested that avoidance of CNI might be beneficial for both and recurrent post-KT [3,13]. One study in 2003 reported that 80% of patients recovered from post-KT aHUS after plasmapheresis in addition to CNI withdrawal [13].

To improve other outcomes related to the overall well-being of patients with aHUS, eculizumab became the first and only treatment approved for aHUS in the United States in 2011 [14]. Eculizumab treatment allowed the withdrawal of plasmapheresis, controlling the plasma-refractory form of disease [3,10]. In order to save our patient’s allograft kidney, we immediately requested approval of eculizumab from HIRA (Fig. 2). In a retrospective national study performed by Portoles et al. [1] in 2020, the median time from the onset of aHUS until the beginning of eculizumab treatment was 11.5 days, and treatment was maintained for a median of 21 days. Patients received eculizumab for an average of 3 months to achieve remission without relapse after withdrawal. They also concluded that eculizumab was better tolerated over total plasma exchange, leading to remission in patients with aHUS [1]. In our case, eculizumab was started within 2 weeks after symptoms emerged, similar to previous studies. Based on previous studies and our experience, a shorter interval between the clinical diagnosis of aHUS and the administration of eculizumab increases the chance of recovering kidney function.

In Korea, although the National Health Insurance Service (NHIS) supports the cost of eculizumab, indications for its support are limited. Patients with TMA must satisfy all of the following criteria to be eligible for support from the NHIS: (1) platelet count below the lower limit of normal; (2) presence of schistocytes on a peripheral smear; (3) hemoglobin <10 g/dL; and (4) LDH ≥1.5 times the upper limit of normal. These criteria are narrower indications for eculizumab therapy than those used in other countries [15]. Even when a patient meets all of the above criteria to use eculizumab, it usually takes a couple of weeks for the drug to be approved by HIRA in Korea. Fortunately, in our case, it only took a week for approval, and eculizumab could be administered within 2 weeks of symptom onset. This might be the key to remission of aHUS while saving the allograft kidney. Therefore, it is very important to keep the possibility of late-onset aHUS in mind if patients show impaired kidney function with hematological abnormalities. If aHUS is suspected based on laboratory data and clinical manifestations, it might be essential to start eculizumab early to rescue the allograft kidney.