Bacterial infection significantly modifies the natural history of cirrhosis patients listed for liver transplantation (LT). Severe infection in an end-stage liver failure patient can result in multi-organ failure involving further deterioration of liver function. Even if this can move the patient up on the waiting list, the patient should be prioritized only after adequate control of the infection. However, the definition of “controlled infection” is lacking. In the setting of LT, patients should be considered suitable for transplantation after resolution of the infection. Frequent hospitalizations and contact with healthcare facilities, immune dysregulation, spontaneous bacterial peritonitis (SBP), varix bleeding, and bloodstream infections are the most common causes of bacterial infection.

As for patients with severe acute-on-chronic liver failure (ACLF) on the waiting list [1,2], prioritization rules with respect to distributive justice, the ideal timing for LT, and delisting criteria should be discussed. According to recent studies, selected patients with “controlled infection” should be considered for transplant because this condition does not impair the posttransplantation outcome [3,4]. Antibiotic prophylaxis is very important for cirrhotic patients with gastrointestinal bleeding, previous episodes of SBP, or repeated intensive care unit (ICU) admission.

Approval for this study of institutional review board was waived because this study is a case report of a single patient and did not include protected health information, data analysis, or testing of a hypothesis, and was de-identified. Informed consent forms were provided to the patients based on the Declaration of Helsinki, and voluntary consent was obtained from the patient. 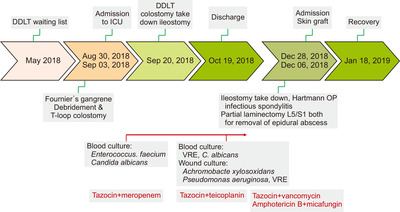 and were detected in the blood. Gangrene wound debris was studied extensively. Despite appropriate antibiotic treatment, vancomycin-resistant (VRE) and were continuously present in the blood while , , and VRE were present in the wound. Subsequently, varix and wound bleeding due to coagulopathy continued. Despite constant blood transfusions, his hemoglobin level dropped to 3 g/dL. The patient's condition was severe and it was difficult to establish the liver transplant operation. Despite repeated bleeding, bacterial infections had improved with additional antibiotics. This demonstrated that necrotic wound care and appropriate antibiotic treatment can significantly control the infection status. As shown in Fig. 1, tazocin and meropenem were administered at the initial stage of Fournier’s gangrene before transplantation. There was no negative conversion of the bacteria prior to transplantation; therefore, vancomycin was added immediately after the transplantation. In addition to this, tazocin and teicoplanin were administered after the surgery. Amphotericin B and micafungin were used as antifungal agents after transplantation (Fig. 1). C-reactive protein levels also decreased. After DDLT, the patient recovered (Fig. 2). Caution was taken with immunosuppressant treatment. A triple regimen was used, and the FK-506 trough level was adjusted between 4–6 ng/mL to balance infection and immunosuppression. Mycomofetil and steroids were administered at the usual doses. 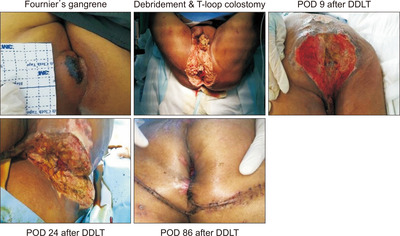 This is a case in which successful LT was performed in the midst of overcoming septicemia and improving infection. LT for the most severely ill patients with cirrhosis and multiple organ dysfunction remains controversial. ACLF is characterized by acute deterioration of liver function in patients with cirrhosis, in combination with recently defined organ failure.

The liver plays a central role during sepsis and is essential for the regulation of immune defense during systemic infections through mechanisms such as bacterial clearance, acute-phase protein or cytokine production, and metabolic adaptation to inflammation. Hepatic dysfunction substantially impairs the prognosis of sepsis and serves as a powerful independent predictor of mortality in the ICU [5]. Sepsis is particularly problematic in patients with liver cirrhosis who experience variceal bleeding or episodes of SBP, as it can trigger ACLF. Notably, the survival of these patients at 6-month posttransplantation was significantly better than that of patients who were delisted or did not undergo transplantation after infection [6].

Cirrhotic patients have immunocompromised states and increased susceptibility to developing community and hospital-acquired infections, especially in those awaiting LT. The risk of dropout from the waiting list and the possibility of undergoing LT after recovery from an infection or during a controlled infection should be evaluated. Sepsis-related organ damage in cirrhosis is characterized by an excessive inflammatory response and a decrease in hepatic tolerance [8]. SBP and urinary tract infections are the most frequent bacterial infections in cirrhosis, followed by pneumonia, skin and soft tissue infections, and bloodstream infections [8].

SBP is mainly due to bacterial translocation, especially Gram-negative bacteria (GNB); however, epidemiology is rapidly changing. A multicenter study from Portugal [9], which evaluated patients with severe liver dysfunction (median Child-Pugh class C-10; MELD score 19), recently showed an increase in gram-positive bacteria (GPB, 42%) at the time of SBP diagnosis, with one out of three SBP episodes occurring during hospitalization because of the high number of invasive procedures and quinolone prophylaxis. GNB were more prevalent in community-acquired and healthcare-acquired infections, while GPB was more common in hospital-acquired infections. (44.3%; particularly , and ) and Enterococci ( and ) (19.7%) were the pathogens.

Similarly, our patient also had GNB and fungi; specifically, , and were detected in blood. Despite appropriate antibiotic treatment, VRE and were continuously present in the blood while , and VRE were present in the wound. Bacteremia after LT frequently occurs and is a potentially severe complication that affects patient and graft survival. The occurrence of bacteremia after pediatric LT is associated with an increased number of vascular complications and reoperations. Although challenging, proper control of bacterial infections and early LT before developing uncontrolled cholangitis may be useful in reducing vascular complications and unexpected reoperations in patients with biliary atresia [10]. Respiratory multidrug-resistant (MDR) bacteremia is a relative contraindication for lung transplantation. The Kaplan-Meier survival curve showed that patients with early posttransplantation pneumonia had significantly higher 1-year mortality than those without [11].

The prognosis of bacterial infection is significantly associated with the severity of liver disease and extrahepatic organ involvement [13,14]. A systematic review [15], 178 different studies with 11,987 patients who have had an episode of bacterial infection reported 1-, 3-, and 12-month mortality rates of 30.3%, 44%, and 63%, respectively. Moreover, almost half of the patients who survived after 1 month died within a year. Several studies have recently investigated the outcome of patients who underwent LT with “controlled” infection. In an Italian study [3], 84 patients were considered eligible for LT after the disappearance of signs and symptoms suggestive of severe sepsis or septic shock. However, patients with previous infections had higher rates of infection (40% vs. 36%, P=0.003) and posttransplant MDR strains (26% vs. 13%, P=0.005).

Bacterial infection is a common cause of impaired liver function in patients with cirrhosis, especially liver transplant candidates. Colonization of MDR bacteria represents another important issue for patients on the waiting list, because of the risk of spreading bacterial infection in the postoperative course and/or after the introduction of immunosuppression.

Accordingly, strategies focusing on the prevention of infections and extrahepatic organ failure are required for patients with cirrhosis on the waiting list. Furthermore, appropriate antibiotics and the standard of care in cirrhotic patients with gastrointestinal bleeding or previous episodes of SBP are very important.

Selected deceased donor LT in controlled Fournier’s gangrene was performed successfully. Controlled infections may be allowed in transplantation surgery because this condition does not impair post-transplant outcomes. Furthermore, transplant candidates may be considered suitable for LT after the resolution of infection.