Congenital absence of the portal vein (CAPV) is a rare venous malformation in which mesenteric venous blood drains directly into systemic circulation. Herein, we report a case of pediatric deceased donor liver transplantation (DDLT) for symptomatic CAPV with whole liver graft from a hepatitis B surface antigen (HBsAg)-positive donor. A 4-year-old boy suffered from CAPV and secondary portal hypertension. He was also diagnosed with DiGeorge syndrome and heart anomalies. After waiting for 4 months, a 5-year-old donor weighing 19 kg with positive HBsAg was allocated to this 4-year-old patient weighing 15 kg. Recipient operation was performed according to the standard procedures of pediatric DDLT. Portal vein reconstruction was performed using interposition of a vascular homograft conduit to the superior mesenteric vein-splenic vein confluence. The patient recovered uneventfully from DDLT. He has been administered with lamivudine to prevent hepatitis B virus infection. This patient has been doing well for 5 years after DDLT without growth retardation. In conclusion, CAPV patients can have various vascular anomalies, thus combined vascular anomalies should be thoroughly assessed before and during liver transplantation operation. The most effective reconstruction techniques should be used to achieve satisfactory results following liver transplantation.

Congenital absence of the portal vein (CAPV) is a rare venous malformation in which the mesenteric venous blood drains directly into the systemic circulation. The majority of patients with CAPV show no signs or symptoms of portosystemic encephalopathy. They only show slightly abnormal liver function tests. Liver transplantation (LT) is indicated for patients with symptomatic CAPV refractory to medical treatments [1], especially those with hyperammonemia, portosystemic encephalopathy, hepatopulmonary syndrome, hepatic tumors, or intractable complications.

The congenital portocaval shunt (PCS) drains all mesenteric venous blood either directly into the inferior vena cava (IVC) or the left renal vein. Thus, theoretically there is no portal hypertension or collateral circulation [2]. The liver with CAPV does not have sufficient portal inflow, thus the hepatic arterial flow is the main inflow blood. If a patient cannot tolerate a medical treatment, LT should be taken into account. Although CAPV induces various clinical manifestations, liver function profiles of patients with CAPV are not severely impaired. Their Pediatric End-stage Liver Disease scores remain low. Since pediatric patients with CAPV do not have any priority in the waiting list, they have a very low chance of receiving deceased donor liver transplantation (DDLT). Herein, we present a case of pediatric DDLT for symptomatic CAPV with a whole liver graft from a hepatitis B surface antigen (HBsAg)-positive pediatric donor.

The study protocol was approved by of the Institutional Review Board at Asan Medical Center (IRB No. 2020-0836), which waived the requirement for informed consent due to the retrospective nature of this study.

A 4-year-old boy was referred due to melena and hematochezia. He was born through a normal full-term delivery. At birth, cardiac murmur was identified. His ventricular and atrial septal defects were increased during a short-term observation. Thus, repair operation was performed at 40 days after birth. Seven days later, he underwent bilateral inguinal hernia operation. At 1 year of age, he underwent anoplasty for abnormal location of anus to the rectum. At 3 years of age, he received supportive care for esophageal and gastric varix bleeding. Serum ammonia level was within the normal limit. At 4 years of age, he underwent endoscopic varix ligation to control melena and hematochezia. Computed tomography showed agenesis of the portal vein with cavernous transformation and secondary portal hypertension with gastric and esophageal varix (Fig. 1). Liver function test findings were still normal. He was diagnosed with mild tricuspid regurgitation. He was also diagnosed with DiGeorge syndrome (microdeletion 22q11.2). However, other significant anomalies were absent except heart disease and CAPV. This patient was not indicated for Rex shunt operation because of poor development of the intrahepatic portal vein system. Thus, we decided to perform LT. 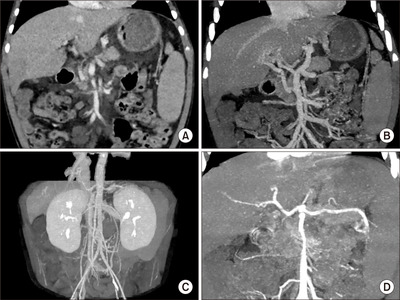 Figure 1. Pretransplant computed tomography scan. (A-C) There is agenesis of the portal vein with cavernous transformation and secondary portal hypertension with gastric and esophageal varix. Any large communication vein to the inferior vena cava or left renal vein is not visible. (D) The anatomy of the hepatic artery appears to be normal.

After waiting for 4 months in the pediatric waiting list, a 5-year-old donor weighing 19 kg with positive HBsAg was allocated to this 4-year-old patient weighing 15 kg. Liver function test findings of the deceased donor were not highly impaired and significant pathological abnormality was not present on frozen-section liver biopsy. Thus, we decided to use this marginal liver graft because the patient had a very low chance to be allocated for DDLT later. The whole liver graft weighed 580 g and the graft-recipient weight ratio was 3.9%.

Recipient operation was performed according to the standard procedures of pediatric DDLT. The recipient’s native portal vein was absent. Thus, the portal collateral branches at the hepatoduodenal ligament were deeply dissected to fully expose the superior mesenteric vein-splenic vein confluence. After deep clamping of this confluence portion with a Satinsky clamp, an external iliac vein segment harvested from the liver donor was anastomosed to the confluence in an end-to-side fashion (Fig. 2). 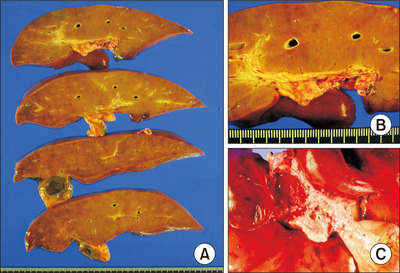 Figure 3. Gross photographs of the explant liver. (A) The liver parenchyma does not show cirrhotic changes. (B, C) Magnification of the portal triad area shows increased vascularity of portal venous structures with variable shapes and intimal fibrosis.

The patient recovered uneventfully from the DDLT operation. The reconstructed portal vein maintained well without any hemodynamic abnormalities (Figs. 4 and 5). Clinically suspected acute cellular rejection occurred at 2 weeks after transplantation. It responded well to a steroid pulse therapy. The patient had antibody to HBs through scheduled hepatitis B virus (HBV) vaccination before LT. During the early posttransplant period, a combination therapy of hepatitis B immunoglobulin (HBIG) and lamivudine was used to prevent reactivation of HBV. HBIG 10,000 IU was administered every week during the first month and every month during the next 4 months with a target trough level of 1,000 IU/mL. After 6 months after LT, lamivudine monotherapy was used to prevent HBV infection because of high maintenance of anti-HBs titers. His HBsAg and blood HBV DNA were negative up to date. This patient has been doing well for 5 years after LT without any growth retardation. 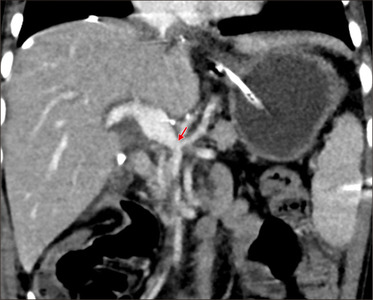 Figure 4. Posttransplant computed tomography scan taken at 7 days after transplantation. The portal vein reconstruction appears to be smooth streamlined with resolution of variceal collaterals. An arrow indicates the anastomosis site of the interposed vascular conduit and the superior mesenteric vein-splenic vein confluence.

CAPV is a rare venous malformation in which mesenteric venous blood drains directly into the systemic circulation. There are two types of congenital PCS: intrahepatic PCS and extrahepatic PCS. Intrahepatic PCS is detected between portal and hepatic veins [3]. Extrahepatic PCS is divided into type I and type II according to intrahepatic portal venous supply [4]. Type I PCS is an extrahepatic shunt without patent intrahepatic portal vein. Thus, the entire mesenteric venous blood drains directly into a systemic vein such as the IVC or the left renal vein. This type is called CAPV. CAPV can be further subclassified into type Ia (superior mesenteric vein and splenic vein do not join to form confluence) and type Ib (superior mesenteric vein and splenic vein join to form confluence). If the portal vein presents a lack of complete development, the PCS is either the result of the persistence of the right vitelline vein (in which case the shunt connects to the retrohepatic IVC), or of the persistence of the left vitelline vein (the shunt is connected to the IVC or the right atrium above the confluence of the hepatic veins) [5]. Type II PCS is an extrahepatic shunt with patent intrahepatic portal vein. Thus, the patent portal vein perfuses the liver and the shunt vessel drains some mesenteric venous blood into the systemic circulation. Our patient had type Ia PCS because no portal venous structures were observed in portal triads.

Unlike usual symptomatic cases with CAPV in the literature, our patient had portal hypertension with gastric and esophageal varix that might be associated with poor development of congenital PCS. Pretransplant imaging studies showed absence of large communication vein to the IVC or the left renal vein. Variceal bleeding secondary to portal hypertension was the primary cause for our patient to undergo LT.

The strategy of surgical treatment for CAPV depends on the types of PCS. Most patients with type II PCS can be treated by ligating or banding shunt vessels while monitoring the portal pressure to avoid the induction of portal hypertension. In contrast, if the intrahepatic portal vein is immature, LT may be required. In other words, most patients with type I PCS are indicated for LT because surgical reconstruction of portal vein structures of the native liver is impossible, like in our patient.

Table 1. Summary of the reported cases of liver transplantation for congenital absence of the portal vein

A congenital PCS drains all mesenteric venous blood either directly into the IVC or into the left renal vein. Thus, there is no portal hypertension or collateral circulation. Significant splanchnic congestion may occur when a PCS is totally clamped during portal vein reconstruction, resulting in severe bowel edema and hemodynamic instability. We have previously experienced a similar situation during early liver retransplantation after multivisceral transplantation in a pediatric patient [15]. The use of a temporary PCS during LT operation can improve hemodynamic status and reduce intraoperative transfusion requirement. The interposed portal vein conduit connected to the superior mesenteric vein-splenic vein in an end-to-side fashion is useful to make a temporary PCS.

Using HBsAg-positive graft to HBV-naïve pediatric patient is one of the last choices to save a patient’s life. We have experienced a few cases of LT using a HBsAg-positive graft in HBV-naïve adult patients with rapidly deteriorating conditions. Suppression of HBV replication was effectively achieved through oral antiviral agents in these patients. Preemptive HBV prophylaxis is mandatory following HBsAg-positive liver graft regardless of recipient’s pretransplant HBV serologic status. Lamivudine is a low genetic barrier agent, thus it is vulnerable to the development of viral mutation. The primary reason why this patient is still administered with lamivudine is that lamivudine is known to be safe for children, and preemptive change to high genetic barrier agents such as entecavir and tenofovir is not currently permitted by the health insurance policy in Korea.