Kidney transplantation (KT) has improved patient survival and quality of life compared to other modes of renal replacement therapy. It has become the treatment of choice in end-stage renal failure [1]. However, the gradual decline in renal function after transplantation is inevitable [2]. The rate may be influenced by numerous variables, including both donor- and recipient-related characteristics. Donor age, donor and recipient race, cold ischemia time, human leukocyte antibody (HLA) mismatching, and delayed graft function have all been shown to significantly influence short- and long-term graft survival [3-5]. Moreover, a calcineurin inhibitor (CNI) based immunosuppression regimens exhibit dose-related nephrotoxicity and could be a contributing factor in graft function decline [6].

Early identiﬁcation of those patients at risk of graft function and subsequent timely therapeutic intervention is necessary to improve outcomes in the kidney transplant patients.

Previous studies have shown that the parameters of renal function, mainly serum creatinine, creatinine clearance, and glomerular ﬁltration rate (GFR), are valuable indicators of long-term outcomes. Early graft function, especially the 1 year posttransplant graft filtration rate or serum creatine level, is the most powerful predictor of long-term graft and patient survival [7-9]. However, these studies included patients who were treated in the early period of the transplantation era. Thus, the studies did not consider highly sensitized patients, ABO-incompatible transplantations, and marginal deceased donor.

After 2000, the number of kidney transplants of high immunologic risk patients (e.g., highly sensitized recipients, leucocyte cross-matching positive, and ABO-incompatible transplantation) and deceased donor transplantation, including marginal donors, rapidly increased in Korea. Special pretransplant and early posttransplantation management regimens were developed, such as plasmapheresis for antibody filtration and use of rituximab for antibody depletion [10]. At the same time, new immunosuppressive agents were rapidly developed [11,12].

We accessed the data of 1,976 consecutive KT recipients between 2005 and 2018 performed at Severance Hospital, Korea. We identified 1,895 cases that met our inclusion criteria. We excluded the following cases: graft failure within 1 month (n=9), loss to follow-up (n=2), pediatric recipient or donor (age under 18 years old, n=37), or combined organ transplantation (n=33). We categorized the included patients into four groups defined by quartiles (Q) of serum creatinine levels at 1-month posttransplant. The cut points for the groups were 1.0 mg%, 1.23 mg%, and 1.52 mg%. We used CNI based triple regimen (mycophenolate mofetil, steroid) as an immunosuppressants protocol, and after 6 months, steroid withdrawal is considered.

Our purpose of this study was comparing of graft survival of each group and comparing graft function and failure rate. Graft function was measured by estimated GFR by Modification of Diet in Renal Disease equation. Graft failure was defined as returning to dialysis or renal retransplantation. Categorical variables are presented as frequencies. We used the chi-square test or Fisher’s exact test to evaluate these data. Time-to-event data were compared by Kaplan-Meier survival curves with log-rank tests. For the adjusted model, we used a Cox regression analysis. All analyses were performed using standard statistical software (IBM SPSS ver. 25.0; IBM Corp., Armonk, NY, USA) and P<0.05 was considered statistically significant. 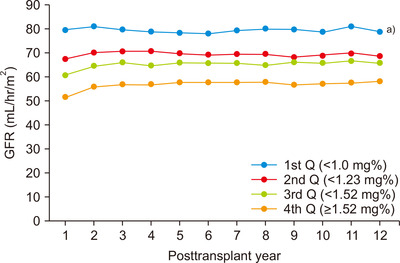 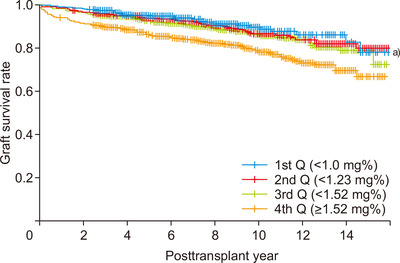 Previous studies have shown that 1-year posttransplant serum creatinine levels and GFR were strong predictive factors of long-term graft outcome [2-4]. However, these studies do not reflect the current state of KT as they were published one to two decades ago. There have been many changes in the transplantation field. High immunologic risk transplantation has been successfully performed, including ABO-incompatible transplantation. The finding of this study that renal and graft failures was not influenced by advanced donor age was unexpected and is inconsistent with that of a previous report [14]. A study by De la Vega et al. [15] found that kidneys from living donors aged 50 years or older had a lower GFR pre- and posttransplant. Our study showed that only the recipient’s age was related to graft failure.

This study is meaningful since it evaluated the long-term graft function of a substantial study population, including high-risk transplant patients (752/1,895, 39.6%). However, our study has some limitations. First, this is a retrospective single-institution study. The patient treatment protocol, including the immunosuppressive drug regimen, has changed during the study period. In summary, the 1-month posttransplant serum creatinine level is the most relevant parameter in predicting long-term graft function. It is influenced by recipient age, acute rejection, and donor type.