The significance of the first living donor kidney transplantation in Jeju: a case report

To overcome the shortage of kidney donors, diverse methods have been utilized, including living donor kidney transplantation (LDKT) and extended criteria for deceased donor grafts. Currently, LDKT is a major treatment option. However, in Jeju, deceased donor kidney transplantation (DDKT) has been restricted due to the prolonged cold ischemia time (CIT) caused by the island’s geographic disadvantages and transportation limitations. We report the first LDKT in Jeju, which demonstrates a means of overcoming prolonged CIT. A 67-year-old male patient with diabetic nephropathy underwent a preemptive ABO compatible LDKT (ABO type O+) from his 62-year-old wife. The operation was uneventful, using anti-thymocyte globulin based on the recipient’s medical and immunologic risks. The patient recovered without significant complications and was discharged on postoperative day 15. Follow-up Doppler ultrasonography showed good blood flow to the kidney, and his serum creatinine levels steadily decreased and remained stable. The first successful LDKT in Jeju was significant in that kidney transplantation was implemented by compensating for its geographic limitations. In addition, we review machine perfusion as another method of avoiding prolonged CIT.

We would like to share our case, the first successful LDKT performed in Jeju, with the aim of encouraging further LDKT and supporting patients with ESRD on Jeju Island.

This study was approved by the Institutional Review Board of Jeju National University Medical Center (IRB No. JEJUNUH 2022-03-012). Written informed consent was obtained from the patient for the publication of this case report and accompanying images.

A 67-year-old male patient with chronic kidney disease due to diabetic nephropathy and underlying coronary artery disease was admitted for preemptive LDKT. His ABO type was O+, and the donor was his wife, a 62-year-old woman with the same blood type. The donor kidneys each had a single artery and vein, without remarkable findings on preoperative evaluation; the left kidney was selected for the allograft (Fig. 1).

Figure 1. Three-dimensional computed tomography of the donor. A single artery was confirmed in each kidney.

On the day of surgery, the recipient received a high-dose steroid (500 mg) and anti-thymocyte globulin (ATG) intravenously to induce immunosuppression. The ATG was continued through postoperative day (POD) 2 (1.5 mg/kg each day for 3 consecutive days; 4.5 mg/kg total).

During the operation, the recipient’s right iliac fossa was prepared, and the right external iliac artery and vein were exposed. Meanwhile, a laparoscopic donor nephrectomy was performed, and the left kidney graft was delivered to the room of the recipient. On the bench table, we located a sub-capsular hematoma in the upper pole of the allograft, so partial capsulotomy was performed to prevent potential hematoma-induced compression after vascular anastomosis. The graft was flushed using HTK solution (Custodiol HTK Solution, Durham, NC, USA).

The renal vein and artery of the allograft were connected to the right external iliac vein and artery of the recipient, respectively. After anastomosis, the vascular clamps were opened and the allograft was observed. The color of the kidney graft changed to pink nicely, and bleeding through the capsulotomy site was controlled with cauterization. The subsequent uretero-cysto-anastomosis was uneventful.

The recipient’s postoperative course was unremarkable. The patient started urination immediately after renal artery declamping. Daily follow-up serum creatinine levels trended down, and the urine output was satisfactory (Fig. 2). Doppler ultrasonography of the kidney on POD 8 showed good vascular flow within normal range of the resistive index (RI, 0.81) (Fig. 3A). He was discharged on POD 15 without complications, and the follow-up Doppler ultrasonography performed 2 months after surgery showed good flow, with an RI of 0.76 (Fig. 3B). 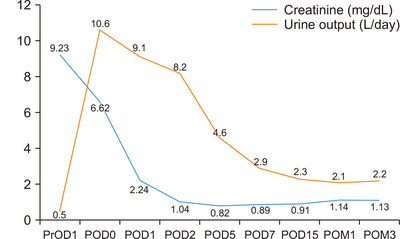 Based on the medical and immunologic risks of the recipient, we used ATG as an induction medication. He matched 1A and 1B in human leukocyte antigen (HLA) class I, and 0 DR in HLA class II, and the donor was older (62 years); therefore, we followed the protocol of Jeju National University Hospital and used ATG. As an induction medication, ATG is reported to reduce the severity of acute rejection in high-risk patients compared to basiliximab [5]. According to the Kidney Disease Improving Global Outcomes guideline in 2009, old age and HLA mismatch are risk factors for acute rejection, and ATG induction is recommended for high-risk patients [6]. Several studies suggested that a dose of 7.5 mg/kg or less was beneficial when compared to high-dose ATG, and that a 3-day induction was as safe as a 7-day induction. Therefore, we adopted an ATG induction therapy with a total dose of 4.5 mg/kg divided over 3 days [7].

According to the Korean Renal Dialysis System report published by the Korean Society of Nephrology, the prevalence of ESRD in Korea has increased every year, reaching 145,006 people in 2020, with 12% having received a kidney transplant. The annual report published by the Korean Network for Organ Sharing (KONOS) in 2020 reported that the number of kidney transplants in Korea increased steadily and reached 2,293 in 2019, of which 794 were DDKTs and 1,499 were LDKTs. This shows that LDKT has become mainstream in Korea.

In terms of frequency of kidney transplants per population, Jeju Island has 7.6 per million people, significantly lower than the national average of 44.3 per million. There are several reasons for the low kidney transplantation rate on Jeju Island. First, the waiting-list score for potential recipients is low because the patient group registered in Jeju National University Hospital has a shorter period of registration in the KONOS than the mainland (an average of 17.5 months for patients at Jeju National University). Therefore, they are given a relatively high Kidney Donor Profile Index or are assigned an extended criteria donor graft, which discourages kidney transplantation.

Second, the geographic nature of Jeju Island presents many obstacles to DDKT. To retrieve and transport kidneys from a deceased donor on the mainland to Jeju Island, our medical staff must use a commercial airplane that usually stops operating at 8 pm. In our experience, cases with a late-afternoon harvest (which frequently occurs) are sometimes rejected for this reason. Furthermore, additional travel time is required because some areas are far from the airport, inevitably leading to longer CIT compared to grafts transported between mainland medical institutions. A CIT over 18 hours increases the incidence of acute tubular necrosis and delayed graft function (DGF), especially in extended criteria grafts [8,9].

This geographic disadvantage discourages DDKT on Jeju Island. Two solutions can be considered. The first solution is to implement LDKT. Kidney transplantation with a live donor is not affected by geographic limitations. After this first successful case, we expect that LDKT in Jeju Island will become more prevalent.

The second solution is the use of hypothermic machine perfusion (HMP) during the transport of donor kidneys (Fig. 4). To solve the shortage of organs, extended criteria donor organs obtained from donors after brain death or circulatory death have become more actively utilized for transplantation. Unfortunately, many of these organs are abandoned because they are more susceptible to ischemia-reperfusion injury and are considered to have a high risk of DGF, primary non-function, and graft failure. This trend is more pronounced on Jeju Island, and machine perfusion is one way to overcome the problems with high-risk organs and the transport process [10,11]. Machine perfusion preserves donated organs during transport by maintaining the organ’s perfusion from procurement to the actual transplantation surgery.

Figure 4. A current commercial model of a portable hypothermic perfusion machine (LifePort Kidney Transporter, Itasca, IL, USA). (A) Insulation preserves a low temperature (4°C) and there is a static cold storage backup for safety. (B) A kidney maintaining a continuous flow using a modified University of Wisconsin solution.

From an immunologic point of view, Kvietkauskas et al. [12] argued that the use of machine perfusion in extended criteria donor kidneys could improve transplant performance by reducing ischemia-reperfusion injuries compared to static cold storage (SCS). Another review of previous research stated that HMP maintains the organ's vessel flow, supplies energy and oxygen to organ cells, and continuously removes metabolic derivatives and toxic materials. Consequently, the transplanted organs are preserved more effectively than with SCS [13].

A study in the Netherlands on HMP strongly influenced their graft preservation methods in DDKT. A randomized trial of 672 patients who underwent DDKT in the Netherlands showed that HMP significantly improved the DGF and graft survival of the transplanted kidney after 1 year compared to SCS [14]. In addition, the safety and feasibility of continuous nonoxygenated HMP were recently verified by a study using data collected over 2 years. HMP has been established as the standard preservation method in the Netherlands [15]. Considering these research results, we expect that HMP could effectively compensate for the prolonged ischemia times in DDKT caused by the regional characteristics of Jeju Island.

Despite challenges, we have made every effort to facilitate kidney transplantation for patients with chronic renal disease on Jeju Island. In this respect, the first successful LDKT in Jeju is meaningful in that it overcame the island’s geographic disadvantage. Furthermore, the use of HMP for graft transportation can also be considered to help overcome regional limitations in DDKT.