The first robotic kidney transplantation in Korea: a case report

Approval for this study of Institutional Review Board was waived because this study is a case report of a single patient and did not include protected health information, data analysis, or testing of a hypothesis, and was de-identified. Informed consent forms were provided to the patient based on the Declaration of Helsinki, and voluntary consent was obtained from the patient.

The patient was a 30-year-old man (weight, 78 kg; height, 188 cm; body mass index, 22 kg/m2) with end-stage hypertensive nephrosclerosis and chronic interstitial nephritis. Other than a history of hypertension, there were no past medical problems or prior abdominal operations. A left kidney, anatomically normal (one artery, one vein), was donated by his 28-year-old sister. He underwent living-donor RKT on November 11, 2019, at Severance Hospital. 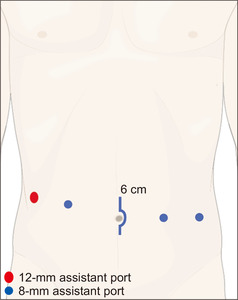 Right external iliac vessels (artery and vein) were first identified and fully dissected, securing hemostasis as needed by bipolar forceps or monopolar scissors. A peritoneal flap was then created for retroperitonealization of the kidney, incising transversely on both sides of psoas muscle (2–3 cm caudal to cecum) and later adjoining the free edges (Fig. 2). Next, the bladder was dissected and taken down, then distended with saline (250 mL) by Foley catheter. A 2- to 3-cm incision of anterior bladder wall was made to create a detrusor flap, exposing bladder mucosa in preparation for Lich-Gregoir ureteroneocystostomy [8]. 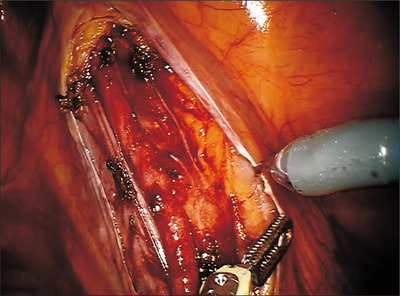 At the same time, laparoscopic donor nephrectomy had taken place, perfusing the extracted kidney with cold histidine-tryptophan-ketoglutarate solution on a back-table and prepping the vessels by conventional means. To facilitate intracorporeal anastomosis through regional hypothermia, the entire kidney (excluding hilar structures) was wrapped in icy slush-filled gauze, marking the anterior aspect for orientation.

After removing the GelSeal cap, the prepped/wrapped graft was delivered intra-abdominally by GelPOINT device, placing the kidney left of right external iliac vessels to rest naturally at bladder. Proper positioning and orientation (lower renal pole toward pelvis) are critical measures to achieve at this point. More icy slush was again added, and the robot was re-docked. 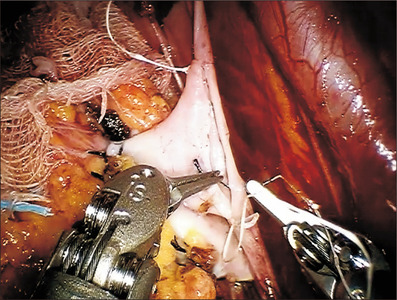 Proceeding to the external iliac artery, we clamped proximally and distally in sequence (bulldogs), performing linear arteriotomy (robotic Potts scissors) and using a 4.0-mm aortic punch across the GelPOINT assistant port for circular conversion. The grafted renal artery was anastomosed end-to-side as above, by continuous suture (Gore-Tex CV-6; W. L. Gore & Associates Inc.) (Fig. 4). After flushing the vessel lumen with heparin and testing for anastomotic integrity, and the donor renal artery was clamped, and the clamped external iliac artery was released. 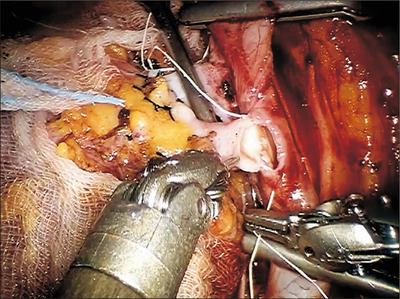 Once hemostasis was ensured at sites of vascular anastomosis, the renal vein and artery clamps were serially removed, and the gauze jacket was cut away. The grafted kidney presented pinkish color and normal turgor without significant bleeding after reperfusion. Positioning of the grafted kidney was ultimately reversed, situated lateral to right external iliac vessels. At this point, the kidney was retroperitonealized, using Hem-o-lok clips (Weck Closure Systems, Research Triangle Park, NC, USA) to approximate the earlier raised peritoneal flaps. 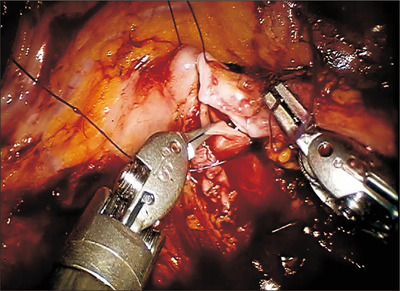 Total operative time was 260 minutes, distributed as follows: console, 249 minutes; cold ischemia, 34 minutes; and rewarming, 54 minutes. In reviewing the time required for each surgical maneuver, it took 7 minutes for vessel dissection, 16 minutes for venous anastomosis, 12 minutes for arterial anastomosis, and 16 minutes for ureteroneocystostomy. Blood loss was 50 mL. The patient successfully underwent RKT, without open conversion, demonstrating immediate graft function. There were no related surgical complications, such as postoperative bleeding, leakage, or lymphocele. Color Doppler ultrasound (CDUS) performed on postoperative day 4 showed a transplant kidney resistance index within normal range (0.55–0.62) and no adjacent abnormal fluid collection on the transplant kidney. Then, on the next day, the drainage was maintained by switching from negative pressure to a natural state. On postoperative day 6, the drainage tube was removed; and at the same time, the Foley catheter was also removed. At the time of discharge (postoperative day 8), the patient had a serum creatinine (Cr) level of 1.27 mg/dL without complication (Fig. 6). The double-J ureteral stent was removed 1 month after surgery. CDUS images obtained 2 weeks after extracting the ureteral catheter revealed a normal appearing kidney transplant. The patient received regular follow-up at the outpatient clinic every month after surgery, and the patient's kidney function is currently well-maintained with Cr level of 1.27 mg/dL. 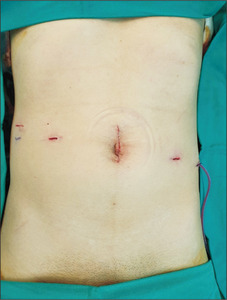 As advances in medical devices and surgical techniques have increasingly allowed minimally invasive procedures in most surgical fields, attempts have been made to perform laparoscopy for transplantation. Due to the technical difficulties regarding vascular and ureterovesical anastomosis with laparoscopy, which result in high conversion rates to open surgery, laparoscopic approaches are not preferred in transplantation. With the introduction of the robotic surgical system in 2000, the technical limitations of laparoscopy have considerably improved. As a result, robotic surgery has proven to be particularly effective, and it has grown in popularity and became the standard practice for surgeries in general. Robotic surgery has clear advantages in terms of stable camera guidance with three-dimensional view, magnification functions, and broad range of movement, all of which make it possible to perform precise vascular anastomoses and delicate tissue manipulation, with better accessibility in otherwise challenging situations. Also robotic surgery has a shorter learning curve than laparoscopic surgery for the operator. From the patient's perspective, robotic surgery offers reduced postoperative pain and minimized perioperative morbidity, compared to open surgery [1,9-11].

Despite steady improvements in KT, pertinent surgical techniques have long stagnated, adhering to classic retroperitoneal access due to immunocompromised patients [12]. Nevertheless, it is not unexpected that a minimally invasive solution would eventually materialize, given the notable strengths of robotic surgery [4]. Hoznek et al. [13] were the first to utilize limited robotic assistance during KT, confined to dissection and to vascular anastomoses. The first complete implementation of RKT was reported by Giulianotti et al. [14], but it was Menon et al. [6,15] who conducted the seminal work on RKT at the Vattikuti Urology Institute. Their study was the first to adopt regional hypothermia during transplant rewarming, wrapping kidneys in jackets filled with icy slush and sustained through GelPOINT supplementation. They also developed standardized stages of KT for purely robotic procedures. Using the Vattikuti Urology Institute-Medanta technique, we performed the first KT within Korea based entirely on robotics. The operation was acceptable in overall duration and in vascular anastomotic times (venous, 16 minutes; arterial, 12 minutes), with a rewarming period of 54 minutes. Upon reperfusion, graft function was immediate. The patient was also complication free and discharged in good condition on postoperative day 8. Compared with conventional KT, RKT enables shorter hospital stays, better cosmetic results, and reduced postoperative pain levels that heighten patient satisfaction.

Unlike previously reported RKTs, our patient remained supine during surgery, although not in lithotomy position; and we docked the da Vinci Si to the left of (not between) the patient's legs. These tactics seemed to facilitate the operation and reduce the discomfort that lithotomy position may impose.

The important factors to consider when selecting a candidate for robotic KT is whether the surgery can be performed safely and feasibly with minimal invasiveness, and whether it is a hindrance to increasing the warm ischemia time. In our institution, we do not consider RKT for patients with immunologically high-risk transplant or previous major abdominal surgery with high suspicion for intra-abdominal adhesion. Also, patients with significant atherosclerotic disease of iliac vessels, second transplant, simultaneous dual or multiple organ transplant, or those with increasing warm ischemia time, such as donors with complex blood vessels, are excluded from the indication of RKT [6].

At present, the relatively longer rewarming time of RKT (vs open KT) during vascular anastomoses and the high procedural costs are problematic. Prolonged rewarming may be overcome by regional hypothermia and through surgical experience [5]. Unfortunately, the National Health Insurance system of Korea does not yet cover the high costs of RKT, which may be offset by its many advantages. As a result, eligibility for RKT is currently limited; however, it will hopefully broaden over time to include other conditions, such as the case of multiple renal artery of donor mentioned by Nataraj et al. [11] or morbid obesity [3,5,14].

In conclusion, the singular patient detailed herein was the first to undergo successful RKT in Korea. Aided by regional hypothermia, RKT may be a safe and effective, minimally invasive alternative to open KT, yielding comparable clinical outcomes.

The authors thank Medical Illustration & Design, part of the Medical Research Support Services of Yonsei University College of Medicine, for all artistic support related to this work.