Hepatic artery thrombosis (HAT) following living donor liver transplantation (LDLT) is a lethal complication. We present the case of a patient who underwent salvage redo hepatic artery reconstruction using an aorto-hepatic jump graft because of HAT following LDLT. A 64-year-old female patient diagnosed with hepatitis C virus-associated liver cirrhosis and hepatocellular carcinoma underwent salvage LDLT using a modified right liver graft. Partial graft infarct was identified at posttransplant day 4, and by day 9, it had spread. Celiac arteriography showed complete occlusion of the graft hepatic artery. We performed redo hepatic artery reconstruction using a fresh iliofemoral artery homograft 10 days after the LDLT operation because such a vessel homograft was available at our institutional tissue bank. The infrarenal aorta was dissected and an iliofemoral artery graft was anastomosed. Soon after hepatic artery revascularization, liver function progressively improved, and the infarct area at the liver graft was reduced. The patient has been doing well for 10 years without any vascular complications. In conclusion, our experience with this case suggests that salvage redo hepatic artery reconstruction using an aorto-hepatic jump graft is a feasible option to treat HAT following LDLT, as in deceased donor liver transplantation.

This study was approved by the Institutional Review Board of Asan Medical Center (IRB No. 2020-0822), which waived the requirement for informed consent due to the retrospective nature of this study. 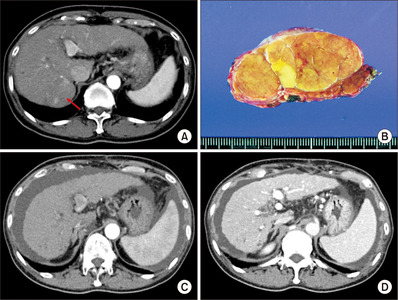 The donor was the 31-year-old son of the patient. The modified right liver graft from this donor weighed 850 g, making a graft-to-recipient weight ratio of 1.67%. The donor recovered uneventfully from the donor operation and was discharged 8 days after the operation.

The pathology report of the explant liver showed mixed macronodular and micronodular cirrhosis associated with HCV infection. (Fig. 2). A 1.9-cm-sized HCC without microvascular invasion was identified. On posttransplant day 1, Doppler ultrasonography showed that the inferior hepatic vein and segment V vein were occluded. Therefore, wall stents were inserted through a transjugular approach on posttransplant day 3. On posttransplant day 4, liver dynamic computed tomography (CT) showed partial parenchymal infarct at the peripheral portion of the liver graft, but Doppler ultrasonography showed the hepatic artery flow to be maintained. Liver function profiles gradually deteriorated. On posttransplant day 9, liver dynamic CT showed an increase of the parenchymal infarct, suggesting hepatic arterial insufficiency (Fig. 3). On the same day, celiac arteriography showed complete occlusion of the graft hepatic artery (Fig. 4), in which the extent of HAT appeared to be wide with retrograde propagation of thrombus. The gastroepiploic artery was poorly developed, thus it appeared to be an unsuitable source for arterial inflow. At that time, the laboratory findings of the patient showed aspartate transaminase 440 IU/mL, alanine transaminase 1,211 IU/mL, total bilirubin 9.8 mg/dL and prothrombin time international normalized ratio 1.44. We seriously considered enrolling the patient in the DDLT waiting list for retransplantation. 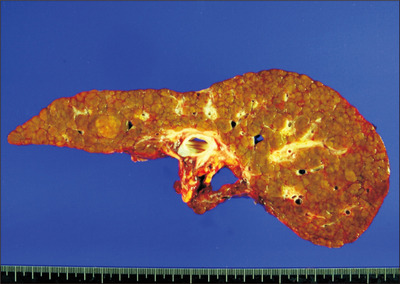 Figure 2. Gross photograph of the explanted liver. There was mixed macro- and micronodular cirrhosis associated with hepatitis C virus infection. A 1.9-cm-sized hepatocellular carcinoma was identified. 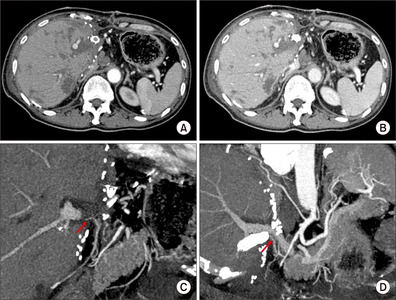 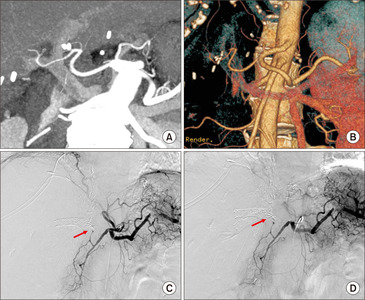 Fortunately, cold-stored fresh iliofemoral artery and superior mesenteric artery grafts were stored at our institutional tissue bank, which had been harvested from a deceased donor one day before. Thus, we decided to perform redo hepatic artery reconstruction using this artery homograft 10 days following the LDLT operation. The infrarenal aorta was dissected and an iliofemoral artery graft was anastomosed. The artery graft conduit was passed posterior to the stomach, and the distal femoral artery was anastomosed to the superior mesenteric artery segment for size matching. A size-matched branch of the superior mesenteric artery conduit was then anastomosed to the graft hepatic artery under surgical microscopy (Fig. 5). Soon after hepatic artery revascularization, liver function improved progressively and the infarct area at the liver graft was reduced (Fig. 6). 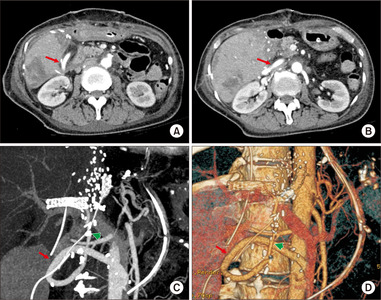 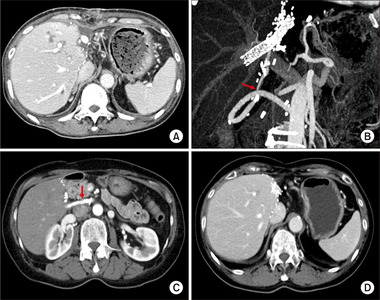 The HCV was treated with interferon therapy at 6 months following LDLT and HCV RNA has been negative for 8 years since its negative conversion at 2 years posttransplantation. HCC recurrence has not been noted on follow-up studies. The patient has been doing well with administration of immunosuppressant and low-dose aspirin (Fig. 6).

HAT is a fatal complication of LT, but the most efficient management of it is debated. Retransplantation is the treatment of choice in early HAT, but we reported that only one adult LDLT recipient underwent retransplantation because of graft dysfunction caused by HAT-induced ischemic graft damage [5]. Considering the real-world situation of a very small donor pool, urgent re-arterialization of HAT should be considered as the first therapeutic option to prevent retransplantation [3].

If HAT is detected early with minimal ischemic graft injury, hepatic artery revascularization may provide favorable results. Several studies report that the mortality rate after diagnosis of HAT was 33.3% (range, 0%–80%) [3,4,8], but we have noted zero mortality in 21 cases of HAT [5]. Early detection of HAT is essential to prevent graft or patient loss. Therefore, we have been evaluating hepatic artery flow with daily Doppler ultrasonography up to postoperative 5 days as well as dynamic liver CT at least once a week during admission. When HAT is suspicious on Doppler ultrasonography, we immediately performed dynamic CT and hepatic angiography. Before performing an urgent hepatic artery revision, splenic artery embolization is done to augment the artery diameter and flow during celiac angiography, when HAT is limited to the right or left hepatic artery and the right gastroepiploic artery is small.

Our institutional measures to preventive HAT in adult LDLT patients include the use of low-molecular heparin during admission period and administration of antiplatelet agent for the first year. Warfarin is not used for prevention of HAT, whereas it has been preferentially used for management of venous thrombosis.

In conclusion, the experience of the present patient suggests that salvage redo hepatic artery reconstruction using an aorto-hepatic jump graft is a feasible option to treat HAT following LDLT, as in DDLT.