Salvage liver transplantation (LT) is a definite treatment for recurrent hepatocellular carcinoma (HCC) after hepatectomy. Combined hepatocellular carcinoma-cholangio-carcinoma (cHCC-CC) is not eligibly indicated for LT because of high post-transplant recurrence. We present a case of salvage living donor liver transplantation (LDLT) in a patient with tumor recurrence after surgical resection of cHCC-CC. A 61-year-old male patient diagnosed with chronic hepatitis B underwent right posterior sectionectomy for HCC. The pathological diagnosis revealed presence of a 3.2-cm-sized cHCC-CC with stem cell features and intermediate cell-subtype. Intrahepatic tumor recurrence occurred 9 months later and transarterial chemoembolization was performed. Due to the progress of recurrent tumors, ABO-incompatible LDLT was performed. The explant liver pathology revealed four small masses of cHCC-CC with stem cell features. Pulmonary metastasectomy and chest wall resection were performed for metastatic lesions at 10 months after LT. Multiple tumor recurrence was detected at 21 months after LT with progression despite sorafenib administration. Currently, the patient is alive for past 26 months after LT. In conclusion, the clinical sequences of this case suggest that the role of salvage LT for cHCC-CC is much more limited than that for HCC because the tumor biology of cHCC-CC is more aggressive compared with HCC.

Salvage liver transplantation (LT) is defined as LT for hepatocellular carcinoma (HCC) recurrence following prior hepatectomy for HCC or post-hepatectomy liver failure. Primary liver tumors other than HCC, such as intrahepatic cholangiocarcinoma (ICC) and combined hepatocellular carcinoma-cholangiocarcinoma (cHCC-CC) are usually not indicated for LT because of the high risk of posttransplant tumor recurrence [1]. Although we possess considerable experience of LT with ICC and cHCC, most of the tumors had been misdiagnosed as HCC before transplantation. In principle, pathologically confirmed ICC or cHCC-CC has not been regarded as an eligible indication of LT in our institution. On the contrary, very early ICC or cHCC-CC, which is one or two tumors measuring less than 2 cm in size, can be considered as a potential indication of LT because the posttransplant risk of tumor recurrence has been reported to be relatively low [1,2].

In Korea, salvage living donor liver transplantation (LDLT) for recurrent HCC after hepatic resection has been performed more frequently than before. However, so far, salvage LT for postresection recurrence of cHCC-CC has not been reported in the literature. Considering that the number of patients with pathologically confirmed cHCC-CC has been gradually increasing, transplant surgeons may face patient’s demand for asking salvage LDLT to treat recurrent cHCC-CC. Thus, we herein present our experience on salvage LDLT performed in a patient who had tumor recurrence after surgical resection of cHCC-CC.

A 61-year-old male patient diagnosed with chronic hepatitis B was admitted to our institution considering the presence of liver mass detected during routine HCC surveillance. A 2-cm-sized single mass was located in the liver segment VII, which was diagnosed as HCC or ICC on dynamic computed tomography (CT) and single-contrast liver magnetic resonance imaging (MRI) (Fig. 1). There was an ill-defined mild hypermetabolic lesion in the right posterior section of the liver on fluorodeoxyglucose-positron emission tomography (FDG-PET). The level of serum alpha-fetoprotein (AFP) was 4.3 ng/mL; proteins induced by vitamin K antagonist or absence-II (PIVKA-II) was 20 mAU/mL, and carbohydrate antigen 19-9 (CA 19-9) was 27 ng/mL. Percutaneous liver biopsy revealed HCC. Subsequently, the patient underwent right posterior sectionectomy. The final pathologic diagnosis was a 3.2-cm-sized cHCC-CC with stem cell features and intermediate-cell subtype. Microvascular invasion was present (Fig. 2A). This lesion was tumor stage II (T2N0M0) according to the 8th edition of the American Joint Committee on Cancer (AJCC) system. The patient recovered uneventfully from hepatic resection. 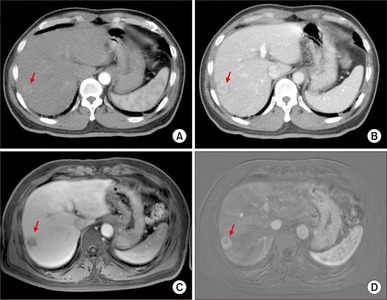 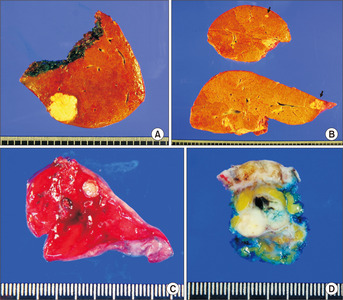 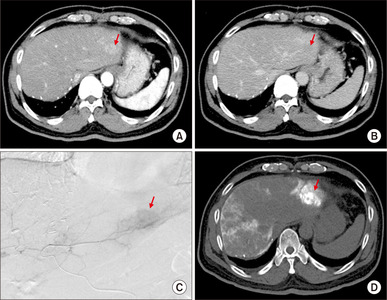 Liver MRI taken at 11 months after hepatic resection revealed the presence of two masses in the liver segments II and III. There was no noticeable progression of the two recurrent lesions on liver CT (Fig. 4). At that time, the level of AFP was 16.8 ng/mL; PIVKA-II was 38 mAU/mL, and CA 19-9 was 35.3 ng/mL. The tumor responded partially to TACE and occurrence of a new lesion was observed. Consequently, we decided to perform salvage LDLT. 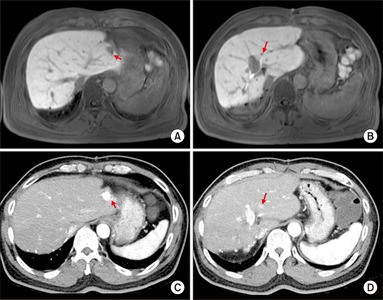 The donor was the 34-year-old son of the patient. As ABO blood groups were not compatible, the patient was treated with rituximab and exchange plasmapheresis. ABO-incompatible LDLT using a modified right liver graft of 653 g was performed at 11 months after prior hepatic resection. The graft-recipient weight ratio was 0.94%. The patient recovered uneventfully from the LDLT operation (Fig. 5).

The final pathologic diagnosis of the explant liver was the presence of four masses of cHCC-CC with stem cell features and intermediate-cell subtype, and the size of the tumor was 2.8 cm, 0.9 cm, 0.5 cm, and 0.3 cm, respectively. Microvascular invasion was present without perineural invasion (Fig. 2B). These lesions were tumor stage II (T2N0M0) according to the 8th edition of the AJCC system.

On CT scans taken 8 months after LDLT, a nodule was identified in the right lower chest wall, which was diagnosed with metastatic cHCC-CC on percutaneous needle biopsy. Another small nodule was also identified in the upper lobe of the right lung on FDG-PET and chest CT (Fig. 6A-D). After diagnosis of tumor recurrence, the primary immunosuppressant was changed from tacrolimus monotherapy to a combination therapy with everolimus, mycophenolate mofetil and minimal tacrolimus. Everolimus monotherapy was theoretically desirable, but its immunosuppressive potency and efficacy were not high enough, especially during the first year after LT. Everolimus and mycophenolate mofetil were used as the main immunosuppressants, whereas minimal tacrolimus was used to match with the social health insurance policy. 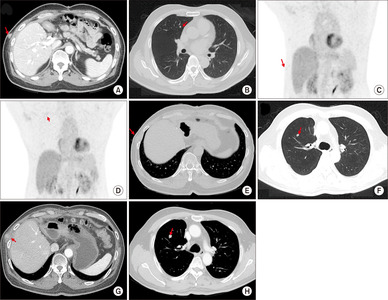 At 10 months after LDLT, pulmonary metastasectomy and chest wall resection were concurrently performed. The lung and subcutaneous lesions were identified as metastatic tumors (Fig. 2C and D). At 21 months after LDLT, multiple recurrent lesions were identified in the right lung and right lower chest wall, and the CT scan taken at 24 months revealed slow progression of these recurrent tumors (Fig. 6E-H). Sorafenib was administered to the patient. This patient is currently alive for the past 26 months with normal liver function and ordinary day-to-day performance.

The cHCC-CC is an uncommon type of primary liver cancer containing components of both HCC and ICC. In our previous study on surgical resection of primary liver tumors, this disease is a rare tumor, comprising approximately an incidence of 5.8% [3]. In the literature, cHCC-CC accounts for 0.8% to 14.3% of primary liver malignancies, with incidences widely varying among studies [4]. According to a population-level analysis in the United States, 52,825 patients had HCC, 7,181 patients had ICC, and 465 patients had cHCC-CC between 1988 and 2009; thus, the proportion of cHCC-CC was 0.8% [5].

The recurrence rate of cHCC-CC after hepatic resection is high, thus various treatments have been used for recurrent lesions, including liver-directed therapy and systemic chemotherapy. TACE has been frequently performed for recurrent cHCC-CC lesions, but its therapeutic effect is debatable because of the histological heterogeneity of cHCC-CCs and more fibrotic and less vascular nature compared with HCC [9]. The efficacy of TACE on primary unresectable and recurrent cHCC-CCs was investigated in two studies from our institution, concluding that the treatment response and prognosis are highly related to tumor vascularity [10,11]. The role of systemic chemotherapy for unresectable and recurrent cHCC-CCs remains unclear and has been identified to be associated with unfavorable outcomes. A multicenter study involving 36 patients evaluated several first-line treatments including gemcitabine/cisplatin, fluorouracil/cisplatin, and sorafenib. Treatment with sorafenib monotherapy showed poorer overall survival compared to treatment with platinum-containing regimens [12]. In our patient, TACE was performed for the recurrent tumor, but only partial response was observed and a majority of the tumor portion remained viable.

LT has been performed in the case of a small number of patients with cHCC-CC. We previously reported 32 LT cases with cHCC-CC; a majority of them were diagnosed with HCC before LT and concurrent HCC was identified in the explant liver in 12 patients [3]. Posttransplant tumor recurrence and patient survival rates were 15.6% and 84.4% at 1 year and 32.2% and 65.8% at 5 years, respectively. Patients with very early stage cHCC-CC (1 or 2 tumors ≤2.0 cm) showed 13.3% tumor recurrence and 93.3% patient survival rates at 5 years. Based on this experience, we have not considered pathologically confirmed cHCC-CC as an eligible indication of LT because very early stage cHCC-CC is usually misdiagnosed as HCC before hepatic resection or LT, thus not being diagnosed as cHCC-CC.

Introduction of mammalian target of rapamycin inhibitor (mTOR) inhibitors has made noticeable changes in immunosuppressive regimens. Everolimus has been covered by social health insurance since early 2016 in Korea. So far, we do not consider everolimus to be one of the primary immunosuppressants, thus it has not been frequently used in our institution yet. Everolimus can be administer after first 1 month of LT primarily because of risk of hepatic artery thrombosis and wound healing problems. Korean Social Health Insurance policy forcefully suggests administrating tacrolimus and everolimus concurrently [13]. The main indication of everolimus in our institution includes development of HCC recurrence or de novo malignancy because mTOR inhibitors are known to be the only immunosuppressive agent with anti-tumor effect [14]. Because of social health insurance policy and its relatively low immunosuppressive potency, it is usually administered concurrently with tacrolimus or mycophenolate. Everolimus monotherapy has been adopted, especially in only patients with overt presentation of primary tumor recurrence or de novo malignancy.

The postresection and post-transplant prognoses of cHCC-CC are dependent on the AJCC system. The 8th edition of the AJCC tumor system for ICC is applied to cHCC-CC because this staging system is equally valid for ICC, cHCC-CC, and primary endocrine tumor of the liver [15]. In our patient, the primary tumor identified during prior hepatic resection was a T2 lesion (solitary tumor with vascular invasion) and the recurrent tumor was also a T2 lesion (multiple tumors with or without vascular invasion). Although two small recurrent lesions were identified at the pretransplant imaging workup, there were four masses in the explant liver. This patient experienced multiple extrahepatic metastases at 10 months after LDLT. Although metastasectomy and systemic chemotherapy were performed, the progression of the recurrent tumors was still observed. Considering these aggressive posttransplant sequences, we presume that the clinical course after LT might not be better compared with non-LT treatment for post-resection recurrence of cHCC-CC. We would like to emphasize that salvage LDLT for recurrent cHCC-CC after hepatic resection should not be attempted because the tumor biology of cHCC-CC is much more aggressive than that of ordinary HCC.

In conclusion, the clinical sequences of this case and our previous experience of LT suggest that the role of salvage LT for cHCC-CC is much more limited than that for HCC because the tumor biology of cHCC-CC is more aggressive compared with HCC.

Shin Hwang was an editorial board member of the journal but did not involve in the peer reviewer selection, evaluation, or decision process of this article. No other potential conflicts of interest relevant to this article were reported.