Anatomical differences between the renal cortex and medulla may influence inflammatory responses. Owing to the difficulty in diagnosing rejections from the medulla, rejection is usually diagnosed through the cortex. However, previous studies have shown that there are no significant differences in renal cortical and medullary lesions in acute allograft rejection. A 60-year-old man with a history of diabetic nephropathy underwent kidney transplant from a living unrelated donor at our hospital in August 2019. Three days after surgery, his urine output suddenly decreased, whereas the serum creatinine levels increased. A kidney biopsy showed only medullary lesions with positive C4d-staining and a Banff score of PTC grade 3. He was diagnosed with acute antibody-mediated rejection (AMR) and treatment was initiated. He did not respond to conventional treatments, including plasma exchange and intravenous immunoglobulin, but his general condition improved after bortezomib administration. There have been a few cases of acute AMR limited to medullary lesions. We consider that rejection cannot be excluded even if the lesions are confined to the medulla.

Acute antibody-mediated rejection (AMR) is one of the critical causes of renal failure after transplantation. The Banff classification is applied following a transplanted kidney biopsy to establish the diagnosis of acute allograft rejection and the therapeutic plan. The accuracy of this classification depends on the number of glomeruli in the cortex in the sample [1]. Anatomical differences between the cortex and medulla may influence inflammatory responses [2]. Owing to the difficulty in diagnosing vascular rejections in the medulla, rejection is usually diagnosed through the cortex [2]. However, a previous study has shown that there are no significant differences in cortical and medullary lesions in acute allograft rejections [2]. It has been suggested that renal allograft biopsies presenting with tubulointerstitial inflammation exclusively in the medulla could be considered a sign of rejection. Visona et al. [3] reported that evidence of tubulointerstitial inflammation in the medulla should be considered as a surrogate marker of acute cellular rejection. Cases of AMR confined to medullary lesions are rare. We review a case of AMR limited to medullary lesions, whereby recovery of renal function was achieved after bortezomib treatment following an ABO-incompatible kidney transplant.

This case was approved by the Institutional Review Board of the Yeungnam University Hospital (IRB No. 2020-06-002). The board waived the need for informed consent since the subjects’ records and information were anonymized and de-identified prior to the analysis.

A 60-year-old man with a history of diabetic nephropathy, hypertension, and heart failure was hospitalized following an ABO-incompatible kidney transplant from a living unrelated donor at our hospital in August 2019. A month before the transplant, rituximab injection was administered. ABO antibody titers tested 2 weeks before transplantation were 1:64 for anti-A and 1:8 for anti-B. The recipient’s blood type was Rh (+) O, and the donor’s blood type was Rh (+) A. Plasma exchange was performed every other day until the antibody titers were reduced to 1:8. One day before surgery, anti-A titer of 1:16 and an anti-B titer of 1:8 were reached; the surgery proceeded as scheduled. His blood urea nitrogen (BUN) level was 62 mg/dL and serum creatinine level was 8.47 mg/dL. Immunosuppressants, including methylprednisolone, mycophenolate mofetil, and tacrolimus, were administered 1 week before surgery. Immediately after surgery, his serum creatinine was 7.09 mg/dL and urine output was maintained above 100 mL/hr. On postoperative day (POD) 1, his BUN was 35 mg/dL and serum creatinine was 3.08 mg/dL. On POD 3, his urine output suddenly decreased to 30 mL/hr and serum creatinine level increased to 3.84 mg/dL. The trough level of tacrolimus was 9.37 μg/mL. Generalized edema gradually worsened and an increased dose of intravenous furosemide up to 60 mg was administered to maintain a urine output of 100 mL/hr. On POD 4, his serum creatinine was 4.3 mg/dL. With a normal duplex kidney scan, allograft rejection could not be ruled out. A biopsy of the transplanted kidney was therefore indicated, and steroid pulse therapy (methylprednisolone 250 mg q 12 hours) was started in advance. However, 3 days of steroid treatment were ineffective, and his serum creatinine levels increased to 4.6 mg/dL (Fig. 1). There were no abnormalities in donor-specific antibody (DSA) and antibody titers—ABO titers were 1:1 for anti-A and 1:4 for anti-B, respectively; C3/C4 levels were in the normal range, while antineutrophil cytoplasmic antibodies and fluorescent antinuclear antibody tests were negative. Eventually, the urine output decreased to zero. This was accompanied by worsening pulmonary edema and generalized edema. Although we were unable to confirm the biopsy results, plasma exchange and administration of intravenous immunoglobulin (IVIG) 100 mg/kg were started and performed every other day. After three rounds of plasma exchange, his serum creatinine began to decrease gradually to 2.3 mg/dL. However, it did not improve further and increased again to 2.6 mg/dL. The renal biopsy showed no signs associated with tissue injury in the glomerulus and tubulointerstitium of the cortex. C4d deposits were observed in both the cortex and medulla (Fig. 2). However, acute tubular injury, neutrophilic peritubular capillaritis (Banff PTC grade 3), and interstitial hemorrhage were observed only in the medulla (Fig. 3). The kidney biopsy findings were compatible with AMR, except that the lesion was limited to the medulla. We decided to start bortezomib therapy (1.3 mg/m2) on days 1, 4, 8, and 11. Four days into treatment, his serum creatinine levels decreased to 1.73 mg/dL. His white blood cell (WBC) count was 9.17 K/μL and platelet count was 89 K/μL. Prior to the second injection, his WBC count was 3.96 K/μL and platelet count was 62 K/μL. The second and third dosages of bortezomib were therefore reduced (1 mg/m2) owing to thrombocytopenia. Treatment was stopped at the fourth injection owing to neutropenia (WBC, 1.76 K/μL; platelet count, 80 K/μL). Serum creatinine decreased to 1.22 mg/dL. Tacrolimus and prednisolone were maintained as immunosuppressive therapy. Mycophenolate was maintained for 4 days after surgery and then stopped because of thrombocytopenia. The patient was discharged 2 months later with a serum creatinine level of 0.96 mg/dL, WBC count of 5.16 K/μL, and platelet count of 96 K/μL. Six months after surgery, these parameters were maintained to 1.13 mg/dL, 5.76 K/μL, and 168 K/μL, respectively, eventually reaching stability at 9 months after kidney transplantation. 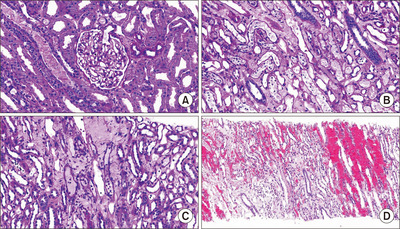 Due to the sudden decrease in urine output and increase in serum creatinine levels 3 days after kidney transplantation, we performed a biopsy of the transplanted kidney. Its results showed non-specific findings in the cortex, but significant inflammation in the medulla involving C4d deposition compatible with AMR. A diagnosis of AMR was made and treatment with plasmapheresis, IVIG, and bortezomib was started. The patient’s general condition and blood test levels were eventually stable.

Diagnoses of allograft rejection have usually focused on lesions in the cortex, as demonstrated by the Banff classification, whose accuracy largely depends on the number of glomeruli in the cortex in the sample [1]. Accordingly, the specimen must contain 10 or more glomeruli and two arteries or at least seven glomeruli and one artery [4]. Furthermore, the inflammatory response is weaker in the medulla than in the cortex, given its low oxygen content and the presence of high levels of metabolic products such as urea and ammonia, which create an environment undesirable for neutrophil function and complement activation [5-7]. Bonsib et al. [1] reported that antigen recognition, lymphokine generation, and lymphocyte recruitment and proliferation are low in the medullary environment. In addition, the absence of arteries and veins in the medullary lesion renders it difficult to evaluate vascular rejection [2]. For this reason, pathologists often focus on the cortex when diagnosing rejection. However, some studies have shown that there are no significant differences in renal cortical and medullary lesions in acute allograft rejection, this was further confirmed by Wang et al. [2]. In the study by Bonsib et al. [1], inflammatory responses in the cortex were more pronounced than those in the medulla, but the rejection intensity was similar. Although related to acute cellular rejection, Visona et al. [3] reported that rejection should still be considered in renal allograft biopsies that present with tubulointerstitial inflammation exclusively in the medulla. As such, both the medulla and cortex need to be evaluated during the diagnosis of allograft rejection.

In the revised Banff 2017 classification of AMR in renal allografts, three criteria must be met for the diagnosis of active AMR: (1) histologic evidence of acute tissue injury, (2) evidence of current or recent antibody interaction with the vascular endothelium, (3) serologic evidence of DSA; however, DSA may be substituted with C4d-staining or expression of validated transcripts/classifiers [8]. We should be careful while interpreting C4d staining in ABO-incompatible kidney transplantations. There are reports that C4d staining is related to the AMR of ABO-incompatible kidney transplantations [9,10]. On the other hand, it is reported that C4d staining increases with time in allografts of ABO-incompatible kidney transplantations [11] and occurs in allografts without evidence of AMR [12]. It is considered that C4d deposition is related to graft accommodation, the mechanism of self-protection against the anti-donor blood-group antibody, in ABO-incompatible kidney transplantation [13]. Our case involved the pathological findings of Banff PTC grade 3 and positive C4d-staining. We postulate that the negative DSA test result demonstrated in our case may be due to the adsorption of antibodies in the transplanted kidney or that rejection occurred in a non-DSA manner. Considering the patient’s clinical course, the DSA test result was negative and the C4d staining interpretation was limited, but we diagnosed it as AMR.

AMR is still a critical cause of graft loss in ABO-incompatible kidney transplantation [14]. The conventional treatment for AMR includes plasmapheresis, IVIG, and rituximab (anti-CD20 antibody). The lack of response to these treatments led to our decision to use bortezomib. By acting against non-transformed plasma cells, bortezomib represents the ﬁrst plasma cell-targeted therapy and has been indicated for refractory AMR following renal transplants [15]. In our case, bortezomib administration was initiated on the 10th day when the patient’s serum creatinine level increased and urine output began to decrease. Its treatment has proven to be effective.

There have only been a few cases of AMR limited to the medulla. Even though the lesion was confined to the medulla, our patient responded well to the treatment approach of AMR; he has shown improved and stabilized allograft function. We consider that allograft rejection cannot be excluded in cases with exclusive medullary lesions. AMR may be carefully diagnosed with a biopsy showing medullary lesion without cortical involvement.

This work was supported by the Medical Research Center Program (2015R1A5A2009124) through the National Research Foundation of Korea (NRF) funded by the Ministry of Science, ICT, and Future Planning.