Biliary atresia (BA)-polysplenia syndrome (PS) is diagnosed in a small proportion of BA patients. We present a case of split liver transplantation (LT) successfully performed in a pediatric recipient with BA-PS. The recipient was 29-month-old boy who underwent Kasai procedure. The coexisting malformations included agenesis of the inferior vena cava with azygos vein continuation, polysplenia, intestinal malrotation, truncated pancreas, and preduodenal portal vein and annular pancreas. With pediatric end-stage liver disease score of 33, the patient was allocated for split LT. Under this condition, the left lateral section graft was equivalent to a graft-recipient weight ratio of 2.6%. The recipient surgery was performed according to the standard procedures of pediatric LT. The graft hepatic vein was directly anastomosed with the suprahepatic confluence of the recipient hepatic veins. An external iliac vein homograft was interposed for portal vein reconstruction. Portal collateral veins were embolized intraoperatively to secure portal vein inflow. No surgical complications were developed. Currently, the patient has been doing well for 4 years after transplantation. Our pediatric patient with BA-PS had various anatomical malformations. Thorough preoperative and intraoperative assessment of these anomalies, adoption of customized reconstruction techniques of LT, and careful posttransplant monitoring are necessary for successful LT.

Biliary atresia (BA) is a rare disease, but it has been shown to be the most common indication for liver transplantation (LT) in children. It is known that biliary atresia-polysplenia syndrome (BA-PS) develops in 2.4%–12% of patients diagnosed with BA [1-5]. This syndrome consists of symptoms including BA and other malformations such as polysplenia, preduodenal portal vein, situs inversus, duodenal or small bowel atresia, midgut malrotation, cardiovascular anomalies, interrupted or absent infrahepatic vena cava with azygous or hemiazygous continuation, and atypical hepatic arterial supply. Additionally, BA-PS is considered as a high-risk factor for LT because of anomaly-associated technical difficulty in LT operation and frequent posttransplant vascular complications [4-7]. We herein present a case of successful split LT using a left lateral section graft successfully performed in a 29-month-old recipient with BA-PS.

In this case, the recipient was a 29-month-old boy who underwent Kasai portoenterostomy at age of 3 months for BA. At the surgery, bowel malrotation was identified, thus Ladd procedure and appendectomy was then performed. The patient had suffered from hepatopulmonary syndrome grade 2 and clubbing hands. A review of pretransplant computed tomography (CT) showed liver cirrhosis and concurrent abnormalities including interruption of the inferior vena cava (IVC) with azygos vein continuation, polysplenia, intestinal malrotation, truncated pancreas, and preduodenal portal vein and annular pancreas. These findings suggested a diagnosis of BA-PS (Fig. 1). The patient’s general condition and liver function deteriorated progressively, thus he was enrolled on the waiting list of the Korean Network for Organ Sharing (KONOS) with a pediatric end-stage liver disease score of 33 (total bilirubin, 13.1 mg/dL; albumin, 2.1 g/dL; prothrombin international normalized ratio, 2.07; and growth failure). At that time, the patient’s height and body weight were 89 cm and 13 kg. 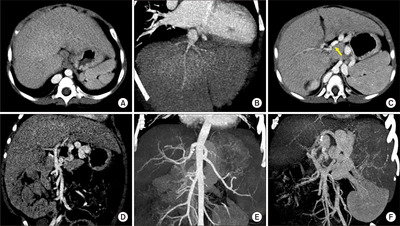 Figure 1. Pretransplant computed tomography scan taken 1 month before transplantation. (A, B) The inferior vena cava was absent with normal development of hepatic veins. (C, D) The portal vein was hypoplastic and located in front of the duodenum (arrow). (E) The hepatic arteries appeared aberrant, but significant malformation was absent. (F) The portal vein was continued with the azygos vein and coronary collateral shunt.

After a waiting period of 1 month, a 15-year-old boy donor with height of 178 cm and body weight of 62 kg was allocated for split LT. Notably, the left lateral section graft weighed 313 g, which is equivalent to a graft-recipient weight ratio of 2.6%. During recipient hepatectomy, we identified agenesis of the IVC with azygos vein continuation, polysplenia, intestinal malrotation and preduodenal portal vein (Fig. 2). The concurrent malformations in this patient are summarized at Table 1. The recipient surgery was performed according to the standard procedures of pediatric LT using a left lateral section graft. Since there was no retrohepatic IVC, the graft hepatic vein was directly anastomosed with the suprahepatic confluence of the recipient hepatic veins (Fig. 3). The recipient portal vein was hypoplastic, and for that reason an external iliac vein homograft from the same donor was interposed for portal vein reconstruction. The graft hepatic artery was reconstructed under surgical microscopy. Finally, hepaticojejunostomy was performed using the preformed Roux-en-Y jejunal limb.

Table 1. Comparison of the anatomical malformations described in the literature and in the present case [1-5,8] 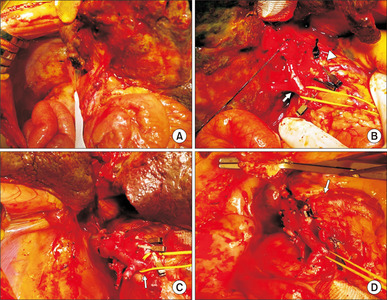 Figure 2. Intraoperative photographs showing the procedures of recipient hepatectomy. (A) There were intestinal malrotation and heavy adhesion. (B) The portal vein (arrow) and hepatic arteries (arrowhead) were isolated. (C) There was agenesis of the inferior vena cava. (D) The portal vein was continued with the azygos vein (arrow).

The recipient operation took 581 minutes, with cold ischemic time of 355 minutes and warm ischemic time of 23 minutes. During recipient operation, pack red blood cell 1 unit, fresh frozen plasma 3 units and 20% albumin 200 mL were infused, thus blood loss was estimated to be 500 mL. In particular, after completion of graft implantation procedures, an intraoperative portography was performed via a small branch of the superior mesenteric vein. The mesenteric venogram showed reversed flow in the splenic vein with remaining large coronary-collateral shunt, thus this shunt was embolized with a coil and N-butyl-2-cyanoacrylate glue, thus making flow normalization of the superior mesenteric vein and splenic vein with patent portal vein inflow (Fig. 4). The early follow-up CT scan showed no vascular complications (Fig. 5). This patient recovered uneventfully from LT operation. This patient has been followed up with Doppler ultrasonography annually (Fig. 6). Currently, he has been noted as continually doing well for 4 years after transplantation. 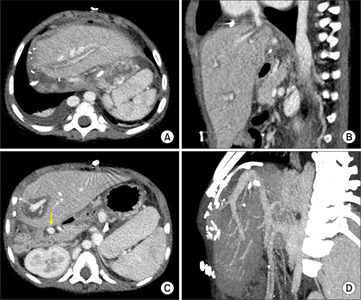 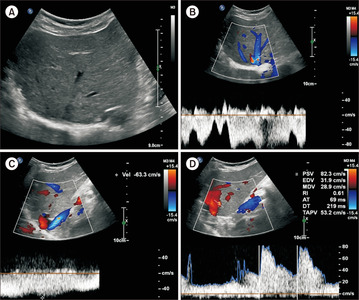 BA is an obstructive neonatal cholangiopathy caused by inflammatory process that causes progressive fibrosis and obliteration of the intrahepatic and extrahepatic bile ducts [9]. It is the most common cause of neonatal cholestasis and biliary obstruction and occurs in 1 in 15,000 to 20,000 live births. If it is left untreated in patients, the resulting cholestasis leads to the severe conditions of liver cirrhosis and hepatic failure [2,10]. Although in most cases, BA occurs alone, 10% to 20% of patients have associated vascular and visceral malformations [8,11]. It was reported that BA syndrome and splenic malformation which has been identified as a subset with a distinct etiology, can lead to a worsened prognosis. In this syndrome, BA coexists with extrahepatic malformations of which the most common is polysplenia, and which may be associated with thoraco-abdominal heterotaxy, such as intestinal malrotation and vascular disorders [2].

The early trials of LT in children with BA-PS were disappointing because of the high rates of vascular complications which were caused by the patients’ abnormalities [3,4]. The main cause of mortality and morbidity remains to be related to technical problems noted in those cases [5-7]. By contrast, recent studies reported that the long-term outcomes of LT in children with BA-PS may be as good as in those with usual non-syndromic BA [6,11]. The absence of IVC at the time of LT operation does not pose significant problems with hepatic outflow reconstruction regardless of the graft types. This result is because the confluence of the recipient hepatic veins used for graft outflow vein anastomosis is effective, as shown in the present case. Generally speaking, preduodenal portal vein is a common component of BA-PS. For this reason, high incidence of portal vein thrombosis is reported in direct anastomosis with the preduodenal portal vein, which might be associated with portal vein hypoplasia in BA and abnormal anatomical position of the recipient portal vein in PS [6]. To cope with this risk of portal vein thrombosis in this case, we used vein homograft interposition to enlarge the portal vein diameter, which is effective to offset the anatomical malposition of the reconstructed portal vein. Furthermore, hepatic artery anomaly is also reported to be common in BA-PS. In the present case, there was no significant hepatic artery anomaly noted, and thus the native hepatic artery was used for reconstruction. Patients with BA-PS are known to be prone to higher rates of surgical complications in the early postoperative period. In this case, we paid special attention to preserve the portal vein flow, in which we performed vein homograft interposition and embolization of the collateral veins [12,13], and frequent posttransplant monitoring of the graft blood flow with Doppler ultrasonography.

Regarding long-term posttransplant outcomes of patients with BA-PS, there is lack of long-term follow-up studies. In a Japanese single-center study with 255 patients who underwent Kasai procedure [14], the incidence of early cholangitis and hepatopulmonary syndrome was significantly higher in BA-PS patients than in isolated BA patients. Of the 11 patients with BA-PS, three died of severe cardiac defects during early infancy; seven became jaundice-free following Kasai procedure, with three patients subsequently requiring LT. The authors suggested that long-term outcomes in BA-PS patients without lethal cardiac defects were comparable to patients with isolated BA. Careful follow-up may be required in patients with BA-PS because of a potentially higher risk of secondary complications such as hepatopulmonary syndrome.

In conclusion, our pediatric patient with BA-PS had various anatomical malformations. Thorough preoperative and intraoperative assessment of these anomalies, adoption of customized reconstruction techniques of LT, and careful posttransplant monitoring are necessary for successful LT.