Acute allograft dysfunction is rarely observed in kidney transplantation (KT). We report an unusual case of acute allograft dysfunction mimicking thrombotic microangiopathy (TMA) in recipient with renal infarction. A 65-year-old man underwent KT from his 39-year-old son. Pre-transplant donor evaluation was normal except for the branches of the upper and lower pole renal arteries originating from the aorta in renal computed topographic angiography, respectively. The immediate post-transplant clinical course was uneventful, but serum creatinine (SCr) increased from 2.2 to 4.5 mg/dL, anemia and thrombocytopenia were shown, and serum lactate dehydrogenase increased to 919 U/L on the third day after transplantation. We suspected TMA, because of no evidence of acute bleeding. The laboratory parameters associated with TMA were within normal ranges. Renal magnetic resonance angiography revealed a focal wedge-shaped perfusion defect in the upper pole of the graft and renal Doppler ultrasonography showed decreased perfusion of the lower pole of the graft. Graft function improved with conservative therapy. The patient was discharged with SCr of 1.21 mg/dL. Graft function has been stable after discharge. Acute allograft infarction should be considered in the differential diagnosis of acute allograft dysfunction mimicking TMA in recipients with grafts supplied by multiple renal arteries.

Renal infarction is a rare cause of acute kidney injury that results from inadequate blood flow to the kidney [1]. The incidence of acute infarction in native kidneys is reported between 0.004% and 0.1% [2,3]. From autopsy study, the incidence was reported as 0.48–1.4% [4]. The incidence of infarction in renal allografts is not confirmed, but it is considered to be less than that in native kidneys. The etiology of acute allograft dysfunction in the early posttransplant period is varied. Some of the causes of acute allograft dysfunction have clinical manifestations that are similar to those of thrombotic microangiopathy (TMA), and they should be considered during differential diagnosis. The main clinical manifestations of renal infarction include abdominal pain, hematuria, and elevated serum lactate dehydrogenase (LDH) level, but since these also occur in TMA, diagnosis of renal infarction in the early posttransplantation period is more difficult. Here, we report an unusual case of renal infarction mimicking TMA in a kidney transplant (KT) recipient with a graft that was supplied by multiple renal arteries.

This study was approved by the Institutional Review Boards (IRB) of the Catholic University of Korea (KC19ZESE0699) and an informed consent was received from the patient and a caregiver. The images are published under agreement of the patient.

A 65-year-old man visited the department of transplantation of our hospital for KT. He was diagnosed with end-stage renal disease of unknown origin. Renal ultrasonography (US) and magnetic resonance imaging performed 4 years ago revealed a 2 cm renal mass at the lower pole of the kidney suspected to be renal cell carcinoma, and radiofrequency ablation was used to treat the renal mass. Follow-up radiological evaluations did not show tumor recurrence. The demographic characteristics and underlying diseases of patient were presented in Table 1. His 39-year-old son was a kidney donor. The results of pretransplant donor evaluation were within normal ranges except for a lower polar renal artery branch 2.7 mm in diameter found on renal computed tomography (CT) angiogram, which originated from the aorta and separately supplied the lower pole of the left kidney (Fig. 1A).

The transplantation was an ABO-compatible transplantation. The patient’s human leukocyte antigen (HLA) type was A02/33, B35/44, DR12/13 and the donor’s HLA type was A02/33, B35/67, DR12/-. There was only one HLA mismatch. The results of panel reactive antibody and HLA crossmatch tests were negative. The patient underwent living donor KT on a scheduled day. He was administered basiliximab (anti-cluster of differentiation 25 monoclonal antibody) for induction and tacrolimus, methylprednisolone, and mycophenolic acid for maintenance immunosuppressive therapy. The transplantation was completed successfully with no complications. The total ischemia time was 60 minutes and the warm ischemia time was 2 minutes 43 seconds. The lower polar renal artery branch seen on renal CT angiogram was reconstructed using the end-to-side anastomosis technique with the middle renal artery. The total volume of blood lost during the operation was estimated to be about 250 mL. On the 1st day after transplantation, serum creatinine (SCr) level fell to 2.19 mg/dL, hourly urine output maintained at 100–300 mL, and the tacrolimus trough level was 4.3 ng/mL.

However, on the 2nd day after transplantation, SCr level increased to 2.61 mg/dL and hourly urine output decreased to 60–130 mL. The patient complained of no symptoms such as abdominal pain, nausea, vomiting and fever. At first, we suspected acute T-cell mediated allograft rejection and started the patient on 1.25 mg/kg of anti-thymocyte immunoglobulin (ATG).

SCr level increased to 4.53 mg/dL on the 3rd day after transplantation despite ATG administration, and within 3 days after transplantation, serum hemoglobin concentration decreased from 10.9 g/dL to 7.0 g/dL (reference, 13.0–18.0 g/dL) and platelet count decreased from 159,000/mm3 to 65,000/mm3 (reference, 150,000–450,000/mm3). Additionally, serum LDH level suddenly increased to 919 U/L (reference, 250–450 U/L). The rapid progression of allograft dysfunction, the sudden progression of anemia and thrombocytopenia, and the increase in serum LDH level informed our suspicion of TMA in accordance with the diagnostic criteria of TMA [5].

On the 4th day after transplantation, SCr level eventually rose to 5.59 mg/dL with worsening anemia and thrombocytopenia at 6.1 g/dL and 65,000/mm3, respectively. However, the laboratory parameters associated with TMA were within normal range (corrected reticulocyte count, 0.8%; absolute reticulocyte count, 37/mm3; haptoglobin concentration, 147 mg/dL [reference, 30–200 mg/dL], Coombs test was negative, and no schistocytes were found). We excluded TMA and considered other causes. On the 6th day after transplantation, renal magnetic resonance angiography (MRA) revealed a focal wedge-shaped perfusion defect in the upper pole of the graft suggestive of infarction without evidence of acute bleeding such as hematoma, renal arterial bleeding (Fig. 2A).

We reviewed the pretransplant examinations and renal CT angiogram showed an upper polar renal artery branch about 1 mm in diameter originating from the aorta and supplying the left kidney, but this finding was not previously mentioned by the radiologist (Fig. 1B). A surgeon informed us of an additional small-caliber polar renal artery branch, which supplied the upper pole of the graft kidney and appeared damaged after nephrectomy, and it was therefore ligated before transplantation. Renal Doppler US revealed decreased perfusion of the lower pole of the graft, which was suggestive of infarction (Fig. 2B).

Therefore, the patient was diagnosed with renal infarction and acute kidney injury caused by ligation of the upper polar branch and reconstruction of the lower polar branch. Renal function improved with conservative therapy, and on the 21st day after transplantation, the patient was discharged with a SCr level of 1.21 mg/dL. The SCr level remained at 1.28 mg/dL 3 months after transplantation.

The change of laboratory findings after KT is shown in Fig. 3. 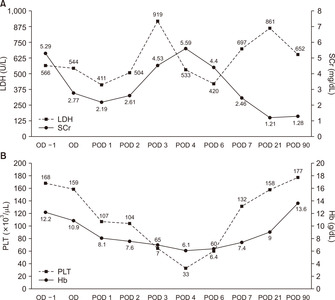 TMA of renal allografts is a serious complication in KT recipients and can either be recurrent or de novo. It mostly occurs within the first month of transplantation at a reported incidence of more than 60% [5]. TMA may be suspected when the following are present: anemia, thrombocytopenia, schistocytes in peripheral blood smears, low haptoglobin levels, elevated serum LDH levels, low hematocrit, and acute allograft dysfunction. This is because TMA has a relatively high incidence after transplantation, while infarction of renal allografts rarely occurs. Histopathological findings from biopsy remain the gold standard in the diagnosis of TMA in renal allografts. Therefore, we planned to perform allograft biopsy to confirm the diagnosis after thrombocytopenia had improved and the risk of bleeding had decreased. Fortunately, allograft function improved and allograft biopsy was not performed. Poor allograft outcomes typically result from TMA in the posttransplant period, and patient survival of at least 3 years is reported to be about 50% [7]. Thus, prompt diagnosis and treatment are necessary to improve patient survival and allograft outcomes.

The incidence of infarction in renal allografts is not confirmed, but it is considered to be less than that in native kidneys. Previous studies reported that the incidence of arterial thrombosis and venous thrombosis in allografts were 0.2%–3.5% and 0.3%–3.0%, respectively [8-11]. Especially, segmental infarction is uncommonly recognized. But, the incidence of focal perfusion defects, including renal allograft infarction, recognized through imaging study was reported as 4%–42% [12]. It reflects heterogeneity of focal perfusion defects in renal transplantation. The common causes of renal infarction in native kidney are cardiac disease, prosthetic valve, arteriosclerosis, polyarteritis nodosa, lupus erythematous, trauma, polycythaemia vera, hypercoagulable disorders and idiopathic [4,13]. In renal allograft, early infarction occurring within 24 hours after transplantation is associated with graft tubular damage, prolonged ischemia, graft edema and diminished perfusion. On the other hand, late infarction occurring after 24 hours after transplantation is associated with cyclosporine toxicity and rejection [8,12,14].

In our patient, renal infarction occurred due to a reduction in blood supply as a result of ligation of the upper polar renal artery branch and end-to-side anastomosis of the lower polar branch. The rate of prevalence of multiple renal arteries is reported to be 12% to 23% for double arteries, 0.7% to 4% for triple arteries, and 0.2% to 1% for quadruple arteries [15,16]. Our allograft had triple renal arteries, which is rare. The upper polar artery as seen on the renal CT angiography of the donor was small in diameter, and since its incidence is low, it was difficult to recognize it. To determine the cause of acute allograft dysfunction, another branched artery was identified on the donor’s renal CT angiogram, and it was consistent with the intraoperative findings reported by the surgeon. In allografts with multiple renal arteries, the incidence of vascular complications, such as renal artery stenosis, renal artery thrombosis, and renal vein thrombosis, is reported to be between 1% and 4% [17-19]. The incidence of infarction in allograft with multiple renal arteries is unclear, but it is considered to be lower than the incidence of vascular complications. A study from our center reported that, in allografts with multiple renal arteries, the incidence of vascular complications and renal infarction were 4.3% and 0.2%, respectively [20]. The etiology of acute allograft dysfunction in our patient was unclear even though the infarct area identified by MRA of the recipient was localized to the upper pole, and the size of the infarct area was small. As infarction is suspected based on decreased perfusion of the lower pole as seen on renal Doppler US performed on the first day after transplantation, it follows that decreased perfusion of the upper and lower poles may induce acute allograft dysfunction. Renal Doppler US is noninvasive, but is not sensitive enough to detect early renal parenchymal change [21,22]. Renal Doppler US performed on the 1st day after transplantation showed decreased vascularity and perfusion of the lower interlobar artery but did not show a change in renal parenchyma. Furthermore, considering the findings of the renal MRA performed on the sixth day after transplantation and the improvement in renal function following conservative therapy, infarction of the lower pole may have been caused by transient ischemia. With regard to laboratory findings, increased serum LDH level is the most sensitive marker, but it is not specific to renal infarction [21]. For these reasons, renal infarction may be misdiagnosed as other diseases such as TMA. As our patient had elevated serum LDH level with anemia, thrombocytopenia, and acute allograft dysfunction, we confused renal infarction with TMA.