Liver transplantation (LT) is an effective treatment for patients with end-stage liver disease due to its improved outcomes and broadening spectrum of indications. Shortage of organ donors and increased demand for LT have led to widening of concepts to increase the availability of liver grafts for LT. Even though old and marginal liver donors, living donors, and domino procedures have been accepted, a profound donor organ shortage is still encountered.

The study protocol was approved by the Institutional Review Board of Asan Medical Center (IRB No. 2020-0857). The requirement for informed consent was waived by the Review Board due to the retrospective nature of this study. This study was performed in accordance with the ethical guidelines of the World Medical Association Declaration of Helsinki 2013.

Incidence of Pediatric Deceased Donors in the KONOS Database

During the 10-year study period, the total number of all deceased organ donors was 4,395. Among these, 171 (3.9%) were pediatric donors aged ≤15 years. The distribution of donors according to age is depicted in Fig. 1.

During the 10-year study period, 640 deceased donor liver transplantations (DDLTs) were performed at our institution and 31 (4.8%) DDLTs used pediatric donor liver allografts (Fig. 2). Among these 31 cases, there were 11 cases (35.5%) of pediatric-to-pediatric DDLT including one case of multivisceral transplantation and 20 cases (64.5%) of pediatric-to-adult DDLT including one case of liver-lung transplantation. All whole liver grafts from nine donors aged ≤5 years were implanted in pediatric recipients aged ≤5 years as whole liver grafts (n=8) and multivisceral transplantation (n=1). The mean weight of liver grafts was 451.3±111.4 g (range, 245–615 g) and the graft-recipient weight ratio (GRWR) was 3.83%±1.18% (range, 2.34– 5.75%).

Figure 3. Comparison of graft survival (A) and overall patient survival (B) outcomes according to recipient age.

Retransplantation cases showed inferior survival outcomes when compared with primary DDLT with pediatric liver grafts (Fig. 4). However, the difference was not statistically significant (P=0.16), which may be attributed to the small sample size. 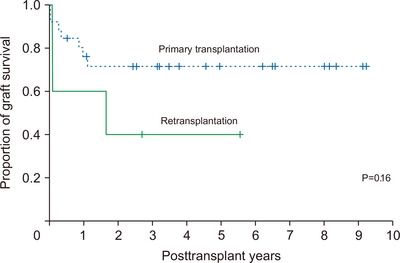 Pediatric donors aged up to 5 years usually have body weights below 20 kg. Liver allografts from these donors cannot be used for adult patients. Thus, all allografts from such donors were allocated to body weight-matched pediatric patients. According to the Korean standardized growth patterns of children, the 50th percentiles of body weight at 60 months, 120 months, and 180 months are 19.0 kg, 35.5 kg, and 60.1 kg, respectively. Thus, pediatric donors aged over 10 years have body weights comparable to adult patients. According to the KONOS regulations of donor-recipient body weight match ratio of 1:2, livers from these pediatric donors can be allocated to adult recipients as whole or split liver grafts. To the best of our knowledge, there is no KONOS regulation for the allocation of pediatric liver allografts to pediatric recipients on priority.

In pediatric patients aged below 5 years, graft-recipient size matching to avoid large-for-size graft implantation is one of the major concerns. The main problems of large-for-size liver grafts include the risk of abdominal compartment syndrome due to the small abdominal cavity of the recipient, discrepancies in vessel size, and insufficient portal circulation and tissue oxygenation [6,7]. A 25-month-old pediatric recipient in the present study underwent graft size reduction through resection of the left lateral section, reducing the GRWR from 7.2% to 6.2%.

On the other hand, for adult and adolescent recipients, implantation of a small-for-size graft (e.g., living donor LT) can also be a matter of concern. In Taiwan, a 60-year-old woman with body weight of 56 kg received a whole liver graft with a GRWR of 0.46% from a 10-year-old donor weighing 12.8 kg [2]. Such an extreme mismatch of graft and body weight is not permitted in Korea according to the KONOS regulations. In the present study, the mean GRWR was 2.08%±0.48% in 16 pediatric-to-adult whole liver recipients and 1.62%±0.29% in four pediatric-to-adult split liver recipients.

In the present study, the pediatric end-stage liver disease (PELD) scores in pediatric patients were much lower than the model for end-stage liver disease (MELD) scores in adult patients. Considering the characteristics of liver diseases in childhood, PELD scores in pediatric patients cannot be compared directly with MELD scores in adult patients in the current Korean setting. Severely abnormal liver function is not observed in many grave conditions that require LT in children. Inborn errors of metabolism such as urea cycle disorders or organic acidemia and hepatoblastoma are examples of such conditions [4]. Therefore, we suggest that liver allografts from pediatric donors aged ≤12 years (age limit of PELD score) should be allocated to pediatric recipients on priority.

The Organ Procurement and Transplantation Network (OPTN) of North America clearly prioritizes potential pediatric transplant recipients while allocating livers from pediatric deceased donors [12]. The ethical principles behind their pediatric organ allocation policy are elucidated by the Pediatric Transplantation Committee and the Ethics Committee of the OPTN/United Network for Organ Sharing [13]. The National Organ Transplant Act charges the OPTN to recognize the differences in health and organ transplantation issues between children and adults throughout the system and to adopt criteria, policies, and procedures that address the unique health care needs of children.

The present study has several notable limitations. It was a retrospective, single-center study with a relatively small number of patients. The detailed allocation status of pediatric donors recorded in the KONOS database was not available. Further high-volume multicenter studies are necessary to validate the results of the present study.

In conclusion, the results of the present study suggested that more than half of the pediatric donor liver allografts were allocated to adult patients. It is necessary to revise the recipient criteria for the allocation of livers from deceased donors, especially those from pediatric donors, to address the special needs of children on the pediatric LT waiting list.