The recipient was a 22-year-old female patient with no systemic conditions, such as hypertension and dyslipidemia, except diabetes mellitus. She was diagnosed with type 1 diabetes mellitus in another hospital 10 years prior at age 12. When she first visited our hospital as an outpatient, her glycated hemoglobin level was 11.1%, which indicated poor glucose control. Forty units of insulin were administered daily, and she received laser treatment several times owing to diabetic retinopathy. Although her blood urea nitrogen and creatinine levels were normal (16.5 and 0.65 mg/dL, respectively), the Chronic Kidney Disease Epidemiology Collaboration GFR was 123.3 mL/min/1.73 m2, and proteinuria (microalbumin, 253 mg/mL; albumin-to-creatinine ratio, 177.4 mg/gm) was seen, which indicated that diabetic nephropathy had already developed. However, prior to transplantation, she had not taken any drug that was effective against proteinuria, such as angiotensin II receptor blockers or angiotensin-converting enzyme inhibitors (ACEi). Renal ultrasonography or biopsy was not conducted to evaluate her pretransplant renal function.

The pancreas was acquired from a 31-year-old woman who had become brain-dead owing to an ischemic brain injury. In the bench procedure, the donor’s iliac artery bifurcation was used as the Y-vascular graft to reconstruct the superior mesenteric and splenic arteries of the transplanted pancreas. Some portion of the inferior vena cava acquired from the brain-dead donor was anastomosed to the portal vein of the transplanted pancreas in a diamond shape to prevent any stricture at the anastomosed site (Fig. 1) [7]. 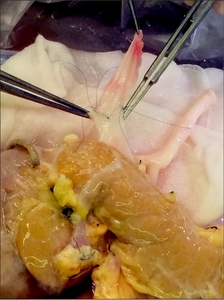 Figure 1. Diamond-shaped patch is applied to the graft portal vein. Graft pancreas is soft with no fatty change.

The recipient’s abdominal cavity was approached through the mid-line, and the extended-Kocher maneuver, which separates the right colon and small intestine from the retroperitoneum, was used to move the intestines. Thereafter, the inferior vena cava and right common iliac artery were dissected. The portal vein of the transplanted pancreas was anastomosed to the inferior vena cava, and the Y-vascular graft was anastomosed to the right iliac artery. Subsequently, blood was reperfused to the transplanted pancreas. After hemostasis, the duodenum of the graft was directly anastomosed to the recipient’s duodenum, which was intended for direct observation of the transplanted duodenum on endoscopy [7]. The drainage tube was inserted, the surgical wound was sutured, and the operation was completed.

Thymoglobulin (anti-thymocyte globulin) was used as immune tolerance induction therapy and administered from the date of surgery to 2 days after surgery, on postoperative days 4 and 6 (five times in total). A total dose of 5 mg/kg was administered. Tacrolimus and mycophenolate mofetil were administered as immunosuppressants. The initial tacrolimus target range was 9–11 ng/mL. The steroid dose was gradually decreased and discontinued in outpatient care after 2 postoperative months; only dual therapy was maintained. The outpatient follow-up continued without any noticeable complications (Fig. 2), and approximately 1 year after surgery, she was hospitalized and treated for pneumonia, which was cured. During the follow-up period, her glucose level was well-controlled (Fig. 3A), and no evidence of transplanted pancreas rejection was observed. 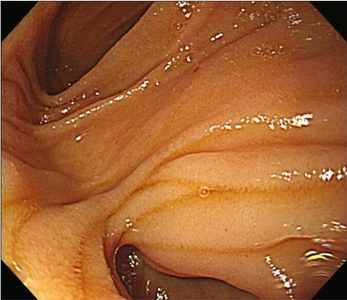 Figure 2. Endoscopic finding of graft duodenum at postoperative 1 year. Heathy mucosa is observed. There is no evidence of rejection on duodenal mucosal biopsy. 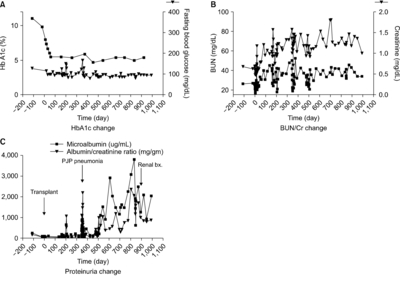 The renal biopsy revealed no evidence of toxicity caused by immunosuppressants and no pathological finding other than diabetic nephropathy. Totally, eight glomeruli were included in the collected tissue, and we identified prominent thickening of the glomerular basement membrane (GBM) and Kimmelstiel-Wilson nodule on hematoxylin and eosin stain, which were strongly suggestive of diabetic nephropathy (Fig. 4). In addition, on electron microscopy, the GBM measured more than 500 nm in thickness (Fig. 5). Immunofluorescence staining showed a pattern of immunoglobulin G (IgG) staining along the GBM (Fig. 6). Based on these findings, the patient was diagnosed with diabetic nephropathy. Global sclerosis was observed in 3 glomeruli (3/8, 37.5%) and thickening of the capillary wall in 5 glomeruli. The renal tubule was normal, and mild fibrosis was observed in the interstitium. Arteriosclerosis was observed in the blood vessels. Up to 4 months after diagnosis, angiotensin II receptor blockers and diuretics were used. Currently, her creatinine finding did not worsen, but proteinuria showed no improvement. Despite increase in proteinuria after transplant, her blood pressure was always within the normal range (≤130/80 mmHg). No hematuria was observed during the entire period.

Figure 4. (A, B) Pathologic findings of renal biopsy. Prominent glomerular basement membrane thickening is identified. Deposits of hyaline material are present under the parietal epithelium of Bowman capsule, forming Kimmelstiel-Wilson nodule in one glomerulus. Global sclerosis is identified (H&E; A: ×200, B: ×400). 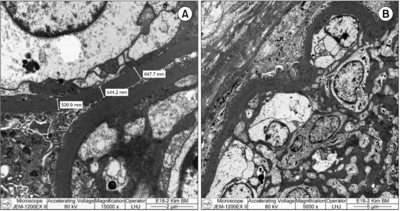 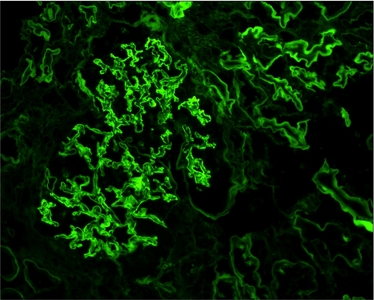 As retinal edema occurred after pancreas transplant, the patient received an Avastin intravitreal injection 2 months and 2 years after the transplant, and a binocular retinal laser treatment around a similar time (YAG laser). The patient underwent binocular cataract surgery for corneal opacity around 25 months after surgery. In the past 1 year, she maintained a visual acuity of 0.1 in the right eye and 0.3 in the left eye. While her diabetic retinopathy is not progressing further, she needs continued monitoring of its progression.

In 1998, Fioretto et al. [8] reported that the glucose levels were maintained at normal for a long time after pancreas transplant alone; however, the GFR of the recipients who received a pancreas transplant may decrease slightly owing to immunosuppressants. Nevertheless, the patients showed histological improvements, their proteinuria decreased, the thickness of the glomerular and renal tubular basement membranes decreased in the biopsy, and the size of the mesangium decreased. In 2011, a report indicated that proteinuria improved substantially although GFR decreased after pancreas transplantation alone [9]. Given these results, one may think that if a pancreas transplant is performed in the patient with uncontrolled glucose levels before transplant, it would improve diabetic nephropathy and have a greater protective effect on the kidney. Another study by Fioretto et al. [10] in 2014, showed that diabetic nephropathy could be reversible through pancreatic transplantation alone; however, during the first 5 years of follow-up, no change was seen in the existing kidney lesions, and it took 10 years to be normalized with long-term of normoglycemia [11]. Thus, even if no change in diabetic kidney disease is identified immediately after transplantation, strict glucose level control and long-term follow-up are warranted, owing to the possibility of reversal to normal kidney structure.

However, owing to the high risk of nephrotoxicity due to immunosuppressants, no conclusion has been drawn regarding the decline in the risk of progression into terminal nephropathy for transplant recipient following pancreas transplant owing to well-controlled glucose levels [5,12].

A long-term observation of progression from type 1 diabetes into diabetic nephropathy shows that GFR increases initially and then decreases rapidly after a certain period [13]. If a patient has only microalbuminuria and normal GFR, improvements into a reversible condition can be expected with active treatment. If macroalbuminuria is present and the GFR begins to decline, the patient’s diabetic nephropathy is highly likely to have progressed and become irreversible already [14]. Thereafter, the treatment goal becomes to delay the disease progression. Diabetic nephropathy is prevented or treated by controlling the glucose level, blood pressure, and blood lipid level, and drug therapy, including ACEi or angiotensin II receptor blockers, are known to reduce proteinuria [15]. However, although this patient had normal GFR, showed no dyslipidemia, and controlled her glucose level well after pancreas transplant, her creatinine level increased slightly, while her proteinuria increased gradually, except increase and recovery sharply during systemic infection. We believe that nephrotoxicity arising from immunosuppressants may have influenced it. Given that her proteinuria increased rapidly when her systemic condition, such as infections deteriorated, diabetic nephropathy at the time of transplant may have progressed further than that identified by the creatinine level or proteinuria.

For the treatment of diabetic retinopathy or retinal edema, intravitreal injection of vascular endothelial growth factor inhibitors has been used; however, it is pointed out that bevacizumab may exacerbate proteinuria and kidney disease [16,17]. However, intravitreal injection is more than 150 times lower than the systemic dosage, and it is reported that it is hard to confirm the clinical correlation [16]. However, progression and recurrence of minimal change disease of the kidney, and progression to renal failure was reported in severe cases [18,19]. Thus, caution must be exercised to treat diabetic retinopathy or edema with chronic kidney disease.

In determining the condition of chronic nephropathy, including diabetic nephropathy, it would be difficult to accurately identify the condition of the kidney on the basis of creatinine level or GFR alone, since currently used immunosuppressive agents, especially calcineurin inhibitor, have important renal effects, decreasing both GFR and albumin excretion rate [13].

In conclusion, when pancreas transplant alone is performed, accurate identification of the recipient’s renal function and proteinuria is required. If possible, transplantation is recommended before progression to irreversible diabetic nephropathy. If the renal function deteriorates or proteinuria increases after transplant, it would be important not only to conclude that it has been caused by immunosuppressants but also to consider the possibility that diabetic nephropathy has progressed despite well-controlled glucose levels and manage the condition accordingly.