Living-donor liver transplantation (LDLT) is a widely-accepted treatment option for patients with end-stage liver disease [1,2]. The shortage of cadaveric donors and the high number of liver transplantations required have increased the prevalence of LDLT. LDLT is especially prevalent in Asian countries for several reasons—including religious beliefs, cultural traditions, and politics [3]. LDLT is a complicated surgery that requires skilled and well-trained surgeons. However, despite improvements in surgical techniques and postoperative management practices, the rate of postoperative complications in LDLT remains substantial.

The diverse postoperative complications following LDLT depend on various factors including the features of the selected liver graft, the major surgical intervention implemented, accompanying problems in the recipient, and the adverse effects of immunosuppressive treatment. Among these, early complications include primary non-function (PNF), acute rejection, infection, vascular complications, and biliary complications [4]. Certain types of postoperative complications require prompt surgical intervention to save both the patient and the graft. Furthermore, patients who require reoperation are more likely to develop additional complications and, in general, have increased morbidity and mortality [2,5,6]. Several recent studies have reported that reoperation rates are higher among LDLT patients than among deceased-donor liver transplantation (DDLT) cases [7-9]. Therefore, for complications requiring reoperation in LDLT patients, appropriate decision-making and treatment plans remain important and time-sensitive issues. In this study, we analyzed the causes, risk factors, and outcomes in patients requiring reoperation within 30 days of adult-to-adult LDLT. In addition, we classified the causes of reoperation by level of risk.

Patient data were prospectively collected from the electronic medical records of the Samsung Medical Center (SMC; Seoul, Korea). A total of 577 LDLTs were performed between January 2010 and December 2016 at SMC, of which 66 pediatric patients and five cases of retransplantation were excluded from this study. In total, 506 adult-to-adult LDLT recipients were retrospectively analyzed. The following characteristics were reviewed for the chosen patients: sex, age, body mass index (BMI), Child-Pugh classification, the model for end-stage liver disease (MELD) score, length of hospital stay, length of postoperative intensive care unit stay, and requirement for intraoperative transfusion. A history of previous operations was collected, including abdominal operations involving intraperitoneal operations, and hepatocellular carcinoma (HCC)-related operations involving liver resection due to HCC (both open and laparoscopic operative techniques). Early reoperation was defined as any surgical intervention within 30 days after LDLT. All operations were performed after obtaining informed consent from the patients and approval by the Ethical Committee and Institutional Review Board of SMC (IRB No. 2019-09-009-001).

Baseline characteristics were analyzed using Pearson’s chi-square test for categorical variables and the Wilcoxon rank sum test for continuous variables. The association of potential risk factors with reoperation was tested using a logistic regression analysis. Variables with P<0.05 in a univariate analysis were included in the multivariate logistic regression. For rare events, a logistic regression model using Firth’s penalized maximum likelihood estimation was applied. A stepwise selection method was used to identify co-variables in the logistic regression model. Patient survival rates were estimated using Kaplan-Meier survival curves, and a log-rank test was used to determine significant differences (P<0.05) between cohorts. All data handling and analyses were performed using the SAS ver. 9.4 (SAS Institute Inc., Cary, NC, USA) and supported by the Biostatistics & Clinical Epidemiology Center in SMC. The P-values <0.05 were considered statistically significant.

Baseline Characteristics of the Recipients 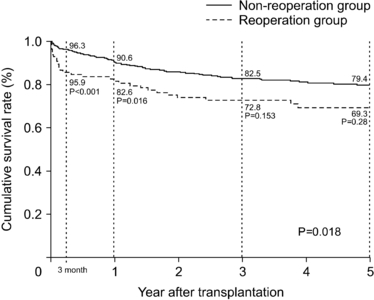 Figure 1. Overall survival rate of patients in the reoperation and non-reoperation groups within 30 days after living-donor liver transplantation. 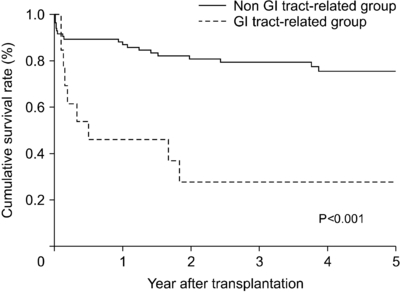 However, it is difficult to determine whether these two are predisposing factors for reoperation after LDLT. A long operation time and lengthy hospitalization were both reasonable factors identified in the reoperation group. Therefore, it would be appropriate to refer to them as related factors rather than risk factors.

Biliary complications are common after liver transplantation, with bile leakage representing the most common complication with a reported incidence of 2%–25% [18]. Biliary leakage usually develops within 30 days of right lobe-LDLT. A bile leak can occur from the anastomosis, the percutaneous transhepatic cholangiography tube tract, the cut surface of the liver (Luschka’s duct), or from the cystic duct remnant [19]. The reported risk factors for biliary complications following LDLT include age, sex, ABO compatibility, cytomegalovirus infection, multiple ducts for anastomosis, and the type of reconstruction performed [20-22]. In this study, all seven cases of biliary complications requiring reoperation within 30 days after LDLT were due to biliary leakage; one occurred on the cut surface of the liver graft, and the other six were associated with multiple bile duct orifices, similar to those reported in other studies.

The main limitation of this study was its retrospective, single-center design. Because patient data were collected over a long period of time, the indications for reoperation and details of postoperative management may have differed among cases. Although the GI tract-related group was classified as a high-risk group and clearly showed statistically significant differences in outcomes, it was difficult to conduct more detailed analyses due to the small sample size. In addition, we did not analyze the anatomical complexity of the vascular system and bile duct, which may affect the results. Further research and analysis will be needed to examine and explain the poor prognosis of the high risk group. Although this study was performed at a single institution, the results are meaningful because they were obtained from a relatively larger number of patients compared to previous studies. Finally, future studies with more data are needed to clarify the high-risk groups by analyzing and identifying factors of significant relevance to causes and outcomes.

In conclusion, a long hospitalization period, prolonged operation time, and a history of HCC-related operations were independent factors associated with early reoperation after LDLT. Patients who required reoperation after LDLT had significantly lower rates of survival than patients who did not. Survival analysis based on the cause of reoperation following LDLT revealed that patients with bile leakage and GI perforation had higher mortality than those with other causes; thus, patients with these complications were classified into the high-risk group. Understanding the risk factors for reoperation after LDLT in different patient groups will help clinicians identify and adopt proper intervention practices, help reduce patient morbidity and mortality caused by reoperation, and improve patient outcomes.