Antibody-mediated rejection (AMR) is a major complication after ABO-incompatible liver transplantation. According to the 2016 Banff Working Group on Liver Allograft Criteria for the diagnosis of acute AMR, a positive serum donor specific antibody (DSA) is needed. On the other hand, the clinical significance of the histological findings of AMR in the absence of DSA is unclear. This paper describes a 57-year-old man (blood type, O+) who suffered from hepatitis B virus cirrhosis with hepatocellular carcinoma. Pre-operative DSA and cross-matching were negative. After transplantation, despite the improvement of the liver function, acute AMR was observed in the protocol biopsy on postoperative day 7; the cluster of differentiation 19+ (CD19+) count was 0% and anti-ABO antibody titers were 1:2. This paper presents the allograft injury like AMR in the absence of DSA after ABOi living donor liver transplantation with low titers of anti-ABO antibody and depleted serum CD19+ B cells.

After the first liver allo-transplantation was performed in the 1960s, the liver was considered an “immune tolerogenic organ”(1). However, in 1989, Gugenheim et al.(2) reported allograft rejection in ABO-incompatible liver transplantation (ABOi-LT). In a total of 17 ABOi-LT recipients, six showed graft failure due to impaired immune responses and antibody-mediated rejection (AMR). To avoid AMR, various desensitization methods have been developed. The protocol for ABOi-LT consists of pre-operative intravenous rituximab (RTX), multiple session of plasmapheresis (PP), local infusion therapy, or splenectomy. After administration of RTX, an anti-cluster of differentiation 20 (CD20) monoclonal antibody, in ABOi-LT, Usuda et al.(3) showed that the incidence of AMR in ABOi-LT was markedly reduced; indeed, recent outcomes were found to be comparable to those of ABO-compatible-LT(3,4). However, AMR is still a major complication after ABOi-LT. According to the 2016 Banff Working Group on Liver Allograft Criteria for the diagnosis of acute AMR requires the positive serum donor specific antibody (DSA)(5). However, clinical significance of histological findings of AMR in the absence of DSA is unclear. Here, we present the case of allograft injury like AMR under the absence of DSA after ABOi-LT with the low titers of anti-ABO antibody and depleted serum CD19+ B cells.

A 57-year-old man (O, Rh+) suffered from hepatitis B virus-related liver cirrhosis and hepatocellular carcinoma (Child-Pugh score and the model for end-stage liver disease [MELD] score were 7 and 9). His wife was the only potential living donor (A, Rh+). The patient received RTX (300 mg/m2) 3 weeks before ABOi-LT and then underwent three sessions of PP. Pre-operative DSA and cross-matching were negative. The titers of anti-ABO antibodies decreased to 1:8 from 1:256, and serum CD19+ B cells were depleted before the operation (Fig. 1). There were no specific findings during the operation. Immunosuppression after transplantation consisted of tacrolimus (target level: 8 to 12 ng/mL), myophenoate mofetil (1,000 mg/day), and steroids. Although the laboratory data on the second post-operative day showed a slight abnormality in liver function; those values gradually decreased (Fig. 2). At 7 days postoperatively, there were no specific findings on computed tomography. 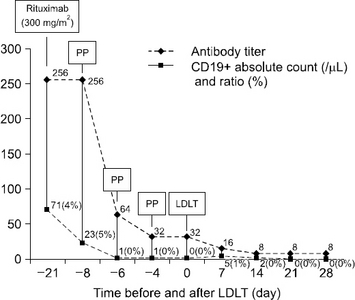 Desensitization protocol and changes in the cluster of differentiation 19+ (CD19+) lymphocyte count and the titer of anti ABO antibody. The titers of anti-ABO antibodies decreased to 1:8 from 1:256, and serum CD19+ B cells were depleted before the operation. Abbreviations: PP, plasmapheresis; LDLT, living donor liver transplantation. 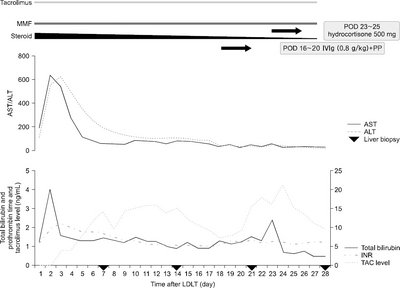 The protocol biopsy on postoperative day (POD) 7 showed mild portal inflammation with endotheliitis, and complement 4d (C4d) positivity was also observed (2016 Banff Criteria H-score 1, C4d score 2) (Fig. 3A). Clinically, the recipient’s hepatic enzyme and condition were improved, and follow-up liver biopsy was performed without any rejection treatment. Follow-up biopsy on POD 14 (Fig. 3B) showed similar histologic feature to the previous biopsy (H-score 1, C4d score 2). The DSA test was negative at that time; however, because of persistent histopathological changes, we decided to start the rejection therapy. Three sessions of PP were performed, and a low dose of intravenous immunoglobulin (0.8 g/kg) was administered for 3 days. Follow-up biopsy on POD 21 (Fig. 3C) revealed aggravated degree of portal inflammation and endotheliitis (H-score 2, C4d score 2). We performed additional steroid pulse therapy (500 mg hydrocortisone for 3 days, followed by tapering). The biopsy on POD 28 (Fig. 3D) showed improvement (H-score 1, C4d score 0). After confirming that pathological symptoms were alleviated, the recipient was discharged. The follow-up biopsy on POD 9 months (Fig. 3E), the histological features showed that no inflammatory changes in the portal tract and the absence of portal endothelial and stromal C4d deposition. However, 1 year after, a weak positive finding was observed in the DSA test, suggesting DSA production.

Written informed consent was obtained from the patients for publication of this case report and any accompanying images.

AMR is a relatively uncommon complication of ABOi living donor liver transplantation, but can be fatal and result in graft failure. AMR occurs as primary AMR, which develops in a recipient with preformed anti-ABO antibodies, or as secondary AMR, in which antibodies develop following LT, resulting in the pathogenesis of acute and chronic liver allograft rejection(6). In our case, asymptomatic acute AMR occurred at 1 week after transplantation. Moreover, acute AMR developed despite the very low titers of anti-ABO antibodies and the presence of 0% serum CD19+ B cells with no DSA.

Recent studies have evaluated the effects of DSA on short- and long-term prognosis. In the past, preformed DSA was generally considered to be clinically unrelated to liver allograft outcomes(8-11). However, recent studies have confirmed inferior clinical outcomes in some but not all DSA-positive patients(12). For this reason, many transplantation centers have performed cross-matching tests with DSA before transplantation to reduce the possibility of rejection. In our patient, the status of DSA before and after transplantation was negative.

Because the factors affecting the development of AMR are unclear, we performed additional analyses to identify other risk factors. There are several reports regarding the role of MHC class I related chain A (MICA) antigens in solid organ transplantation. We conducted an additional test for antibodies against MICA antigens. The results showed that the recipient’s serum had no antibodies against MICA alleles. MICA molecules are glycoproteins that are expressed on the cellular membrane. The test for crossmatch can detect alloantibodies against donor HLA-I and -II antigens, but neither test detects alloantibodies against MICA because the lymphocytes used in the test do not express MICA antigens on their cell surfaces(13). Several clinical studies have shown that MICA antibodies correlate with increased risk of rejection and decreased allograft survival rates following renal or heart transplantation. However, in case of liver transplantation, there are no relationships between AMR and MICA in LT.

We performed in total four liver biopsies once per week for accurate diagnosis and response to treatment. Liver biopsy is considered a practical diagnostic tool for identifying liver pathology, despite its possibly of morbid complications. Alten et al.(14) reported of 703 cases of liver biopsy done for 409 liver transplant patients, complication occurred in 10 cases (1.4%), but were resolved with conservative treatment. They concluded that liver biopsy is a relatively safe and adequate diagnostic tool for liver transplant patients. Thereby we decided to periodically conduct follow-up liver biopsies whenever the patient did not follow a typical post-operative course or when we could not rule out the possibility of rejection.

After considering all the factors, the recipient did not have the factor that caused acute AMR and did not show any clinical manifestations. After thorough examination, the patient did not possess any of the factors nor clinical manifestations that may have caused acute AMR. Moreover, C4d staining did not show a diffuse intense pattern unlike in typical AMR, and hematoxylin and eosin staining (H&E) showed weak inflammatory findings. In adults, there findings can be observed in allograft dysfunction due to biliary obstruction, recurrent hepatitis B virus (HBV) or hepatitis C virus (HCV) and plasma cell hepatitis(5). In addition, combined AMR and T-cell mediated rejection is reported to be relatively common(15); therefore, it needs to clear distinction. However, according to the component lesion scoring for acute AMR in liver allograft(5), the recipient’s pathologic findings corresponded to C4d-score 3 (diffuse [>50% portal tracks] C4d deposition in >50% of the circumference of portal microvascular endothelia) and histopathologys score 2 (monocytic, eosinophilic, or neutrophilic microvasculitis/capillaritis, defined as at least 5 to 10 leukocytes marginated and/or intraluminal in the maximally involved capillary prominent portal and/or sinusoidal microvascular endothelial cell enlargement involving a majority of portal tracts or sinusoids, with variable but noticeable portal capillary and inlet venule dilatation and variable portal edema). Because the DSA was negative in pre-, posttransplant tests, the patients belongs to indeterminate for AMR according to Banff Working Group criteria for acute AMR in liver allografts. However, since the pathological changes of the tissues were evident, we treated the patient according to AMR.

Although, clinical significance of DSA (-) AMR is unclear, it has been shown that the treatment improves histopathologic changes in this case. In ABOi-LT, investigations for immediate histologic allograft injury similar to AMR might be needed to know its clinical significance.