What Is Antibody-Mediated Rejection in Histologic Diagnosis in Liver Recipients?

Antibody-mediated rejection (AMR) is a rare event in liver transplantation compared to other solid organs such as the kidney and heart because of the different immunologic reactions in the liver and it ability to compensate for damage. Although it is not easy to define the histological features that help diagnosis because of its rarity, a few histologic features such as portal eosinophilia with eosinophilic endothelialitis have been reported as useful for diagnosis of acute AMR in presensitized patients. C4d staining is not a good indicator of AMR in liver grafts because of its low sensitivity and specificity. AMR is an emerging cause of chronic graft failure, especially in high risk patients having preformed or de novo donor specific alloantibodies (DSA). Some histologic parameters including interface hepatitis, lobular inflammation, portal collagenation, portal venopathy, and sinusoidal fibrosis, have been suggested as chronic AMR to predict graft fibrosis and survival in DSA positive patients. In conclusion, recent studies have resulted in the histological diagnostic criteria of AMR becoming more specific; however, confirmation of AMR still requires strong clinical evidence for alloantibodies.

Antibody-mediated rejection (AMR) is a rejection reaction that antibodies in recipient which have been already produced or are newly generated antibodies after transplantation bind to graft and cause cell damage. The antigen-antibody reaction occurs mainly in the transplanted blood vessels. This reaction activates the blood coagulation system in the serum, resulting in the formation of intravascular thrombus and the formation of vasculitis through infiltration of inflammatory cells into vascular endothelial cells. Both reactions cause tissue congestion and hemorrhage, ischemic tissue necrosis, or ischemic damage to the supported cells.

The liver is known to have immunologic tolerance unlike other solid organ. Resistance to AMR of liver is owe to the difficulty of induction of immune reaction and compensation ability of liver to tissue damage. Liver secretes the soluble Human Leukocyte Antigen (HLA) class I molecules which form immune complexes with alloantibodies and are easily cleared by Kupffer’s cells before cell damage occurs(1,2). Limited distribution of HLA class II expression in hepatic microvasculature is also attributed to the prevention of immune reaction(1,2). Phagocytosis by Kupffer cells has a major role in clearing platelet aggregates, immune complexes, and activated complement in AMR. The abundant blood volume, large organs size, and vigorous regenerative capacity of the liver counteract cellular damage due to AMR, making diagnosis difficult(1,2).

Diagnosis of AMR in a solid organ can be made when the following four conditions are met; 1) clinical impairment of organ function in the organ, 2) evidence of tissue damage which can be assessed by histologic diagnosis, 3) evidence of antibody response, such as activation of complement system or presence of immunoglobulin deposition, and 4) presence of circulating antibodies at the time of biopsy.

Hyperacute rejection is the classical AMR, which develops after a few seconds or minutes after transplantation and is usually experienced in ABO-I transplantation. Ischemic changes can be easily identified in gross inspection. Histo-logic findings are congestion, thrombosis, and engorgement of neutrophils in micro vessels. Sequentially, periportal and portal edema, necrosis of periportal hepatocytes with cholangiolitis and ductular reaction occur and ends with confluent hemorrhagic necrosis of hepatic lobules (Fig. 1A). 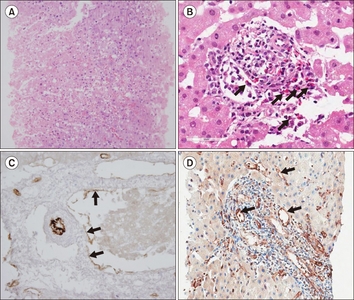 In order to solve the difficulties of diagnosis due to nonspecific features of AMR, O’Leary et al. has conducted multicenter study to develop a scoring system that can be used for AMR diagnosis and has published several morphological features that can enhance the agreement of pathologic diagnosis(3). Four independent transplant pathologists involved in the diagnosis of AMR in 26 cases of training set and 37 cases of validation set. Model was selected according to the guiding principles: 1) a scientific bases of AMR, 2) simplicity, 3) the least inter-observer variability, and 4) the best correlation with C4d staining in tissue. The key histologic features to AMR and positive C4d staining were portal eosinophilia, portal vein endothelial cell hypertrophy, eosinophilic central venulitis, central venulitis severity, and cholestasis (Fig. 1B). Acute AMR inversely correlated with lymphocytic venulitis and lymphocytic portal inflammation. The final acute antibody-mediated rejection score (aAMR score)—the sum of portal vein endothelial cell hypertrophy, portal eosinophilia, and eosinophilic venulitis divided by the sum of lymphocytic portal inflammation and lymphocytic venulitis—exhibited a strong correlation with severe acute AMR in the training cohort. The interesting point of this study is that eosinophilia and eosinophilic venulitis are the main feature of AMR contrasted with lymphocytic venulitis which is the main feature of acute cellular rejection (ACR). Irrespective of applicability in practice and some limitation in study, scoring system (aAMR score) is expected to be an objective histologic criterion for AMR diagnosis.

Complement 4d (C4d) is the degradation product of the activated complement factor C4, a component of the classical complement cascade initiated by antibody-antigen reac-tion. Immunohistochemical detection of C4d is possible due to the C4d’s long-lasting nature in tissue, and positive staining of C4d along the basement of vasculature in tissue is considered as “foot-print” of an antibody rejection on vessels and as the key diagnostic criteria of AMR in solid organ transplantation. Positive staining of C4d in peritubular capillaries in renal allograft is the hallmark of AMR in renal transplantation, except in some exceptional cases. Diagnostic scheme of AMR in renal transplantation consisting of C4d, histologic abnormality, and, antibody in serum became a prototype of the diagnostic criteria of AMR in solid organ transplantation.

C4d in liver is detected in several cellular location by immunohistochemistry. Cytoplasm of hepatocytes, stromal matrix in portal tract or perivenular fibrotic area, and capillary endothelial cells in portal tract or central vein, and endothelial lining of sinusoid are the representative location where C4d can be identified(Figs. 1C, 1D). Elastic layer of hepatic artery is normally stained by C4d, which can be used as internal positive control. Comparative study between immunofluorescence staining of C4d on fresh frozen tissues and immunohistochemical staining on matched formalin fixed paraffin tissues suggested that C4d staining along the endothelial cells of sinusoid, portal vein or hepatic venules in portal tract or central vein was positively correlated with presence of donor specific antibody (DSA) or crossmatch (XM) positivity(4). Cytoplasmic immunoreactivity can be observed in ischemic hepatocytes after ischemia-reperfusion injury reflecting truncated activation by opsonizing C-reactive protein to the damaged cells(5). The meaning of positive C4d staining in matrix in fibrotic stroma without endothelial cell staining is not clear. The C4d positive rates are various among studies from 25% to 100% in XM or DSA positive patients including ABO-I(4-8). The reason for the difficulty in applying C4d positivity as a diagnostic guideline for AMR in liver transplantation is that C4d deposition can be observed in Hepatitis C virus (HCV) associated hepatitis, ACR, and even normal liver tissue. Positive rates in these conditions are lower than XM+ or DSA+ patients, but are reported as 12∼40% in HCV hepatitis, 9∼70% in ACR, 0∼33% in normal control liver(4-13). In an earlier study of C4d in liver, c4d was intended to discriminate between ACR and viral hepatitis, and AMR was not the subject of discussion(11-13). A reason for the inconsistency of the study results is that the size of the individual study population is not so large, the antibody test method and the accuracy of the test are different from each study. The difference in the histological diagnosis criteria of the biopsy among institution and the temporal discrepancy between the antibody test and the biopsy can be seen as the cause. Considering these conflicting study results and the low specificity and sensitivity of C4d staining, C4d staining in liver can be the supportive evidence for AMR in condition that patient may have the clinical or laboratory evidence for antibody formation for graft and histologically other type of hepatitis, such as viral hepatitis, toxic hepatitis, or cholangitis can be excluded, but C4d alone cannot be used for diagnosis of AMR in liver.

Chronic allograft dysfunction or graft failure can be induced by several causes, such as repeated or unsolved acute cellular rejection, prolonged biliary complication, or graft arteriopathy of large vessels. Classical histologic features of chronic rejection are ductopenia (loss of bile duct in portal tracts), progressed fibrosis of portal, perivenular, or sinusoid, portal venopathy or arteriopathy, and cholestatic damage in hepatic parenchyme. Ductopenia and perivenular fibrosis may result from the repeated bile duct damage or endothelialitis via ACR. Decreased bile duct may cause cholestatic damage to the liver. This is the classical scenario to explain chronic rejection via ACR. Another part of chronic graft failure is a progressive hepatic fibrosis with unexplainable causes. DSA is emerging as a possible explanation for this phenomenon. Although acute AMR is too rare in liver, patients with DSA before or after transplantation shows lower graft survival and fibrosis in graft(14,15). Idiopathoic post-transplant hepatitis and fibrosis, together with idiopathic central perivenulitis and de novo autoimmune hepatitis, is the cause inducing graft dysfunction in late period of transplantation. Although these entities are called as late cellular rejection and are considered as the histologic variant of cellular rejection contrasted with acute cellular rejection, several studies reported the evidences suggesting that DSA can be the cause of this type of problems; high incidence of DSA in serum, presence of autoantibodies for specific protein in serun, and positive C4d staining in chronic rejection(14,16-18). Recently, O’Leary et al. suggested several histologic factors and scoring system called as chronic AMR (cAMR) score, predicting the graft failure in DSA positive patients(19). “cAMR score” was based on the six parameters including HCV status, lobular inflammation, interface hepatitis, portal collagenation, portal venopathy, and subsinusoidal fibrosis and value more than 27.5 predicted 50% 10-year survival with 80% specificity and sensitivity(19). This scoring system was designed to predict to graft failure in DSA positive patients, but it can be applied for DSA negative patients considering that composing histologic parameters are common findings also in DSA negative groups.

AMR is a very rare event in liver transplantation, but several emerging evidences suggested that AMR can have some histologic characteristics to make a confirmatory diagnosis in highly suspected patients and some histologic parameters in the graft biopsy of a DSA positive patient can predict the graft survival.