Background: We investigated the incidence and outcomes of pediatric deceased donor liver transplantation (DDLT) using whole liver grafts in a high-volume liver transplantation (LT) center.
Methods: The study was a retrospective single-center analysis of whole LT in pediatric recipients. The study period was set as 20 years between January 2000 and December 2019. We defined pediatric recipients and donors to be aged ≤18 years.
Results: During the study period, there were 98 cases of pediatric DDLT, and 34 patients (34.7%) received whole liver grafts. The age range of the deceased donors was 3 months to 56 years and that of pediatric recipients was 7 months to 17 years. Common primary diseases for LT were biliary atresia in 13, acute liver failure in four, Wilson disease in four, congenital portal vein agenesis in three, and genetic metabolic diseases in three. Pediatric-to-pediatric and adult-to-pediatric whole LTs were 22 (64.7%) and 12 (35.3%), respectively. A good correlation was noted between the donor and the recipient’s body weight, and the recipient’s body weight and allograft’s weight. Graft and overall patient survival rates were 91.2% and 91.2% at 1 year, 88.0% and 88.0% at 3 years, and 88.0% and 88.0% at 5 years, respectively.
Conclusions: The results of this study revealed that Korean Network for Organ Sharing (KONOS) regulations with donor-recipient body weight matching exhibited good performance. Considering the reciprocal trades of liver organs among pediatric and adult donors and recipients, it is necessary to establish a policy for pediatric donor liver grafts to pediatric recipients on a priority basis.

Liver transplantation (LT) is an effective treatment for patients with end-stage liver disease because of improved results and broadening of indications. For pediatric patients, LT with size-matched whole liver allografts from pediatric donors is considered as ideal due to lower complication rates and better survival compared with other variant types of LT [1]. However, the number of liver allografts recovered from pediatric donors is very limited in Korea. Furthermore, the body size of pediatric patients is widely variable from infant to adolescent, thus donor-recipient body size matching is much more complex compared with adult-to-adult deceased donor liver transplantation (DDLT).

The study protocol was approved by the Institutional Review Board of Asan Medical Center (IRB No. 2020-0857), which waived the requirement for informed consent due to the retrospective nature of this study. This study was performed in accordance with the ethical guidelines of the World Medical Association Declaration of Helsinki 2013.

The standard techniques for whole LT have been used for pediatric recipients in principle. There are four technical points unique for pediatric DDLT. For recipients with body weight less than 40 kg, a modified piggyback technique involving a large cavocaval anastomosis was primarily used to secure graft outflow vein reconstruction. This method effectively prevents graft hepatic outflow obstruction under the situation of extrinsic compression of the inferior vena cava due to large-for-size graft implantation (Fig. 1). For recipients with body weight less than 20 kg and portal vein hypoplasia, the side-to-side unification venoplasty technique was used for portal vein reconstruction as it enables accomplishment of the effective size of the anastomotic cross-sectional area and a streamlined configuration without axial rotation (Fig. 2) [9]. For congenital portal vein hypoplasia or agenesis, portal vein interposition with deceased donor femoral vein or external iliac vein was used. Surgical microscopy was used for hepatic artery reconstruction regardless of the diameter of the artery. 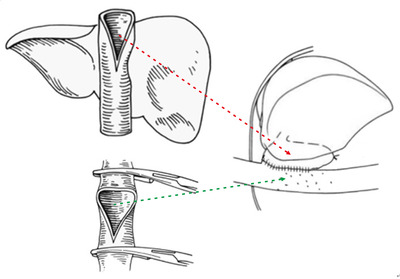 Figure 1. Illustration of the modified piggyback technique to make a large cavocaval anastomosis. After clamping of the suprahepatic and retrohepatic inferior vena cava (IVC), the orifices of the right, middle, and left hepatic vein trunks are opened altogether to make a large single orifice. A 4–5-cm-long longitudinal incision is made at the ventral surface of the retrohepatic IVC to enlarge the anastomotic vein orifice. A 4-cm-long longitudinal incision is also made at the dorsal surface of the graft IVC. These triangular-shaped orifices at the recipient and graft IVCs are well matched, thus being tolerant to extrinsic compression. 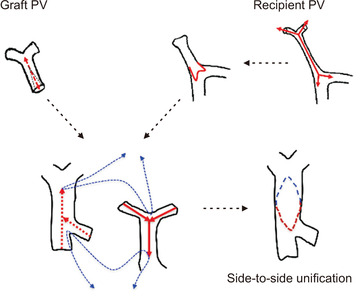 Figure 3. Scatter plots showing the age distribution of recipients and donors. Distribution of all the 34 recipients (A) and younger subgroups with recipient age ≤6 years (B). A dotted line denotes correlation.

The primary diseases for LT in 34 pediatric recipients were biliary atresia in 13, acute liver failure in four, Wilson disease in four, congenital portal vein agenesis with congenital portosystemic venous shunt in three, genetic metabolic diseases in three (each one case of Alagille syndrome, glycogen storage disease, and ornithine transcarbamylase deficiency), Caroli disease in one, progressive familial intrahepatic cholestasis in one, hepatoblastoma in one, and retransplantation after LDLT in four cases. One patient with glycogen storage disease had undergone hepatocyte transplantation 3 years before LT. Eight deceased donors were managed at our institution and the remaining 26 donors were managed at other institutions.

The age distribution of the deceased donors and pediatric recipients is depicted in Fig. 3A. The recipients were categorized into subgroups depending on the age: between 7 months and 6 years and between 10 years and 17 years. In the younger subgroup, the age of the donors and recipients exhibited good correlation (donor age=0.86×recipient age, r2=0.83, P<0.001) (Fig. 3B), and all the donors were pediatric donors. On the contrary, in the older subgroup, out of 15, only three were pediatric donors and the remaining 12 donors were adult donors. Thus, pediatric-to-pediatric and adult-to-pediatric whole LTs were 22 (64.7%) and 12 (35.3%), respectively (Table 1). 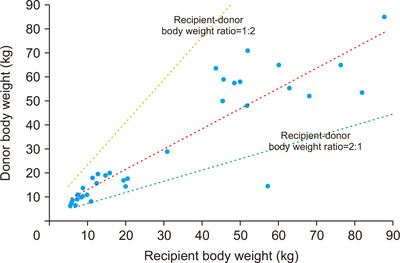 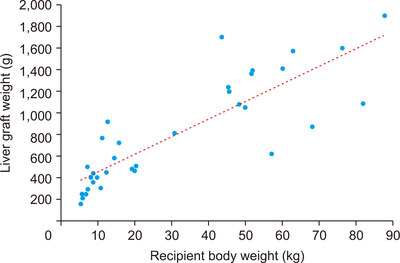 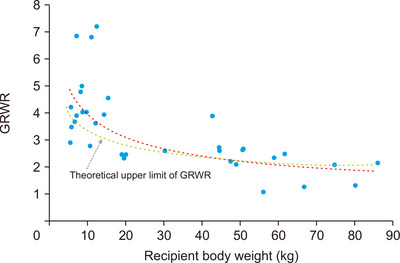 For pediatric recipients with a body weight of less than 40 kg, the abovementioned modified piggyback techniques were primarily used for graft outflow vein reconstruction. For older adolescent patients, the standard technique of DDLT with interposition of the graft inferior vena cava was used. The mean warm, cold, and total ischemic times were 275.8±153.4 minutes (range, 71–839 minutes), 46.1±9.9 minutes (range, 30–74 minutes), and 335.3±221.8 minutes (range, 101–1,397 minutes), respectively. There was no incidence of major vascular complications, except for portal vein stenosis in infant-to-infant whole LT in three cases [7]. 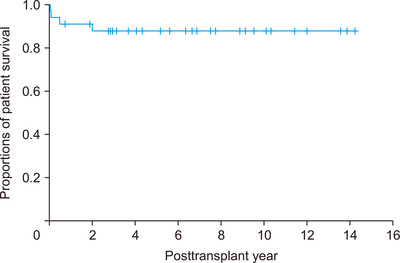 According to the Korean standardized growth patterns of children, the 50th percentiles of body weight at 5 years, 10 years, and 15 years are 19.0 kg, 35.5 kg, and 60.1 kg, respectively. Thus, pediatric donors over 10 years of age have comparable body weight to that of adult patients. According to the KONOS regulations of donor-recipient body weight match ratio of 1: 2–1: 2, the liver graft from adolescent donors can be allocated to adult recipients as whole or split liver grafts. To the best of our knowledge, there is still no KONOS regulation for the priority allocation of pediatric liver allografts to pediatric recipients.

In the present study, for pediatric patients aged ≤6 years of age, a high correlation was observed between donor and recipient age, which resulted in the reasonable matching of donor and recipient body weight and GRWR values. On the contrary, pediatric patients aged more than 10 years received liver grafts more frequently from adult donors than pediatric donors, primarily because the incidence of deceased donors of that age is lowest, as shown in our previous analysis of the KONOS database [6].

Graft-recipient size matching to avoid large-for-size graft implantation is one of the main concerns for young pediatric recipients and avoidance of small-for-size graft implantation is important for adolescent and adult recipients [10,11]. The results of this study revealed that the KONOS regulations on donor-recipient body weight ratio appeared to be too wide for accurate size matching, but it was reasonably acceptable for real-world liver organ allocation because severe size mismatching was selectively precluded by the transplant teams.

Vascular complications frequently occur following the implantation of a whole liver graft in an infant recipient because of the small vessel size per se although the graft size is well-matched to the recipient body size. We previously demonstrated the occurrence of portal vein complications in four of seven cases with infant-to-infant whole LT, and successful prevention through customized surgical techniques with side-to-side unification venoplasty [9].

The pediatric end-stage liver disease (PELD) scores used in pediatric patients are usually lower than the model for end-stage liver disease (MELD) scores used in adult patients. Considering the characteristics of liver diseases in childhood, pediatric patients with PELD scores cannot directly compete with adult patients with MELD scores. Many grave conditions that require LT in children do not show abnormal liver function [2]. In this study with a study period of 20 years, 12 cases of pediatric whole LT were performed in the form of adult-to-pediatric DDLT, but there were only three cases of adult-to-pediatric whole LT after the adoption of MELD score for organ allocation in 2016. The results of this study and our previous study on pediatric deceased donors reveal that pediatric patients are more disadvantageous concerning organ allocation under the current MELD/PELD score-based KONOS allocation system compared to the previous situation [6].

The Organ Procurement and Transplantation Network (OPTN) of North America prioritizes pediatric potential transplant recipients while allocating livers from pediatric deceased donors [15]. The ethical principles behind their pediatric organ allocation policy are elucidated by the OPTN/United Network for Organ Sharing Pediatric Transplantation and Ethics Committees [16], which states that the National Organ Transplant Act charges the OPTN to recognize the differences in health and organ transplantation issues between children and adults throughout the system and adopt criteria, policies, and procedures that address the unique health care needs of children.

We contemplate that it is reasonable to add a PELD score exception for patients with inborn errors of metabolism, hepatoblastoma, and some unusual diseases to the current MELD/PELD score-based allocation system. Considering the relatively small number of such patients at the pediatric DDLT waiting list, we hypothesize that a policy of “pediatric donor liver grafts to pediatric recipients with priority” will be effective to shorten the pediatric waiting list [2].

This study had a notable limitation. This was a retrospective, single-center study with a relatively small number of study patients. Further high-volume multicenter studies are necessary to validate the results of this study.

In conclusion, the results of this study revealed that KONOS regulations with the matching of donor-recipient body weight worked well and older pediatric patients also received whole liver grafts from adult donors. Considering the adult-favoring reciprocal trades of liver organs among pediatric and adult donors and recipients, it is necessary to establish a policy for pediatric donor liver grafts to pediatric recipients on a priority basis.