Background: The Model for End-Stage Liver Disease (MELD)-based allocation system was implemented in Korea in July 2016 without a mandatory abstinence period for liver transplantation (LT) listing. However, the impact of the allocation policy has not been evaluated in patients with severe alcoholic hepatitis (AH).
Methods: A total of 81 consecutive patients with severe AH between January 2014 and December 2018 were analyzed. The clinical course of patients before and after the implementation of the MELD-based allocation system was assessed.
Results: More patients received LT (25%–65%) after the MELD allocation system was implemented. The increase in patients receiving deceased donor LT was dramatic (17%–51%, P=0.001) compared to patients receiving living donor LT (7%–14%, P=0.30). The overall survival was better for those who received LT (88% vs. 44% at 1 year, P<0.001), and after the MELD era (1-year survival rate: 80% vs. 50%, P=0.005). Post-LT mortality was observed in six patients, with one case of mortality related to recidivism. Baseline MELD and steroid response were factors associated with transplant-free survival.
Conclusions: After implementation of the MELD-based allocation system, deceased donor LT dramatically increased in patients with severe AH. This translated into increased overall survival, but at a cost of mortality due to recidivism. Urgent evaluation is warranted to identify criteria to justify the use of precious liver grafts from deceased donors for severe AH patients in Korea.

To date, the management of severe AH remains a clinical challenge with few effective treatment options [5]. The cornerstone therapy for AH is nutrition and abstinence from alcohol [3]; however, this is not often successful. Corticosteroids are the only treatment option shown to reduce mortality from severe AH [6]. However, the benefits of corticosteroid treatment remain controversial [7]. Corticosteroids administered to patients with severe AH increase the risk of developing serious infections and may increase the risk of mortality in patients who experience infection [8]. Patients with severe AH unresponsive to medical therapy have 1-year mortality rates of up to 70%–90% [9,10]. Early liver transplantation (LT) for severe AH is a potentially life-saving treatment with established survival benefits [11,12]. However, LT for AH as a rescue therapy is also controversial [13,14], especially in terms of the selection criteria justifying the use of precious liver grafts [15,16].

The study protocol was approved by the Ethics Committee of the Samsung Medical Center (IRB No. 2019-07-118). Since this study used only de-identified data routinely collected during hospital visits, the requirement to obtain informed patient consent was waived.

Variables, Sources of Data, and Measurements

The following variables were collected by reviewing the electronic medical records of each patient: age at hospitalization; sex; previous decompensation history; presence of infection; gastrointestinal bleeding; imaging, endoscopic, and laboratory results; medication use; and LT during follow-up. The presence of hepatomegaly, splenomegaly, and ascites were evaluated using computed tomography (CT) or ultrasonography findings. Splenomegaly was defined as the largest dimension >11 cm, and hepatomegaly was defined as a longitudinal axis >16 cm at the midclavicular line on CT or ultrasonography. Infections were defined as follows [20]: (1) spontaneous bacteremia: blood cultures without a source of infection; (2) spontaneous bacterial peritonitis: ascites fluid polymorphonuclear cell count >250/uL; (3) lower respiratory tract infection: new pulmonary infiltration in the presence of (i) at least one respiratory symptom (cough, sputum production, dyspnea, pleuritic pain) with (ii) at least one finding on auscultation (rales or crepitation) or one sign of infection (core body temperature >38°C or <36°C, shivering or leucocyte count >10,000/mm3 or <4,000/mm3) in the absence of antibiotics; (4) skin infection: fever with cellulitis; (5) urinary tract infection: urine white blood cell >15/high-power field with either positive urine Gram stain or culture in symptomatic patients; and (6) other source of infection (e.g., intra-abdominal infection, secondary peritonitis). Gastrointestinal bleeding was defined as evidence of hematemesis/melena/hematochezia, a drop in hemoglobin of 2 g/dL or more from baseline, or the need for a transfusion. Previous decompensation included jaundice, ascites, variceal hemorrhage, or hepatic encephalopathy prior to admission. The presence of varix was identified by reviewing endoscopic findings among patients who underwent upper endoscopy and by reviewing CT findings. The following laboratory variables at initial hospitalization were collected: white blood cell count, platelet count, prothrombin time, bilirubin, ALT, AST, gamma glutamyltransferase, blood urea nitrogen, and creatinine. All patients were assessed using the MELD score (3.78 ln [bilirubin]+11.20 ln [international normalized ratio]+9.57 ln [creatinine]+6.43) [21]. For those who received LT, the MELD score on the day of transplantation, waiting time, and alcohol relapse after LT were collected. For those who received corticosteroid treatments, the Lille score (3.19–0.101×age+0.147×albumin on day 0+0.0165×evolution in bilirubin level–0.206×renal insufficiency–0.0065×bilirubin on day 0–0.0096×prothrombin time was calculated. Steroid non-responders were defined as a Lille score >0.45 [22].

Baseline characteristics were described using frequency (percentage) and median (interquartile range). Continuous variables were analyzed using Student t-test or the Mann-Whitney U-test. Categorical variables were analyzed using the chi-square test or Fisher’s exact test. For the MELD score, patients were divided into two groups according to MELD score (<25 and ≥25). The cutoff point was chosen based on the area under the receiver operating characteristic analysis. The survival curves were plotted using the Kaplan-Meier method, and the difference between the curves was tested using the log-rank test. Multivariate Cox regression analysis was performed with all variables with a P-value <0.10 in univariate analysis to evaluate predictors of overall survival and TFS. Statistical significance was set at P<0.05.

Table 1. Baseline patient characteristics in the eras before and after implementation of the MELD-based allocation system 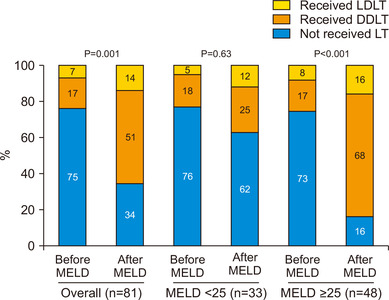 Outcome, Steroid Use and Factors Associated with Overall Survival

Figure 2. Flowchart of patients from enrollment concerning corticosteroid use, liver transplantation (LT), and death or survival. 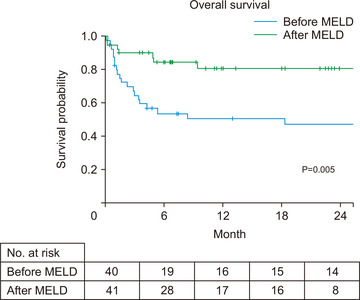 Figure 3. Kaplan-Meier estimates of overall survival in the eras before and after Model for End-Stage Liver Disease (MELD)-based allocation system implementation. Before MELD: Jan 2014–Jun 2016; After MELD: Jul 2016–Dec 2018.

Comparison According to Liver Graft Type

Among the 37 patients who received LT, 9 received LDLT, and 28 received DDLT. The median time from LT listing was not significantly different between the two groups (LDLT, 14 days vs. DDLT, 9 days; P=0.24). The DDLT group had higher MELD scores at transplantation than the LDLT group (40 vs. 29, P=0.035). After LT, alcohol relapse was identified in 5 of the 37 patients (13%). Six deaths occurred after LT. The cause of mortality was sepsis in four patients, graft rejection in one patient, and liver failure related to recidivism in one patient (Supplementary Table 1).

In this study, we observed improved survival in patients with severe AH in the post-MELD era. There was no significant difference in baseline patient characteristics before and after the MELD allocation system was implemented. However, more patients received LT, and the number of patients who received DDLT increased dramatically (17% to 51%) in the post-MELD era. LT was an independent predictor of survival, while the era (before or after the MELD allocation system) was not an independent factor for survival. All these findings suggest that changing the liver allocation system was the main driver of the dramatic improvement in outcomes for patients with severe AH by increasing the allocation of deceased donors to severe AH patients in Korea.

In this study, LT was an independent factor associated with survival, and the difference in the survival rate at 1 year was significant (88% vs. 44% at 1 year, P<0.001). This indicates that LT is a lifesaving treatment for patients with severe AH. However, limited organ supply, risk of recidivism, and the fact that a DDLT is a social resource is a major concern for transplanting patients with severe AH [28]. In this study, we observed one case of early death due to recidivism. There is an unmet clinical need for patients with severe AH to justify the use of precious liver grafts in the selection criteria [16]. In this regard, factors associated with TFS can be useful in guiding management plans. In this study, baseline MELD score and corticosteroid response were independent factors associated with TFS. The MELD score has been shown to have high prognostic power in classifying the prognosis of patients with severe AH, albeit with different cutoff values [1]. Those with a high MELD score require careful monitoring for poor prognosis. Another factor was the corticosteroid response, defined by the Lille score. Our findings were consistent with a recent modeling study that showed that early LT can increase life expectancy and can provide the highest benefit when MELD and Lille scores are used in clinical scenarios [29]. Considering that corticosteroid response is represented by the Lille score, the MELD score and corticosteroid response may be used to determine who may benefit from early LT.

Our study has some limitations. First, for inclusion in this study, we used the diagnostic criteria for definite or probable AH by the National Institute on Alcohol Abuse and Alcoholism [19]. These criteria allow patients with previous decompensation to be diagnosed with AH. However, it can be very challenging to deferentiate severe AH from acute decompensation of decompensated cirrhosis, and misclassification can occur if a liver biopsy is not performed [19]. Of note, previous decompensation was observed in 46%, while liver biopsy was performed in only 23% of the patients analyzed in this study. Hence, misclassification bias may exist. Second, data were obtained from a retrospective study conducted at a single institution with potential selection bias. The decisions regarding steroid treatment and LT were made by the doctor in charge of the patient; therefore, unmeasured or unidentified bias might be present in the decision to provide steroid treatment or list the patient for LT. Additionally, assessment of alcohol consumption after LT was retrospectively collected from medical records, so there is a possibility of underestimation of alcohol use due to patient underreporting. The sample size of this study (n=81), which included those who underwent liver biopsy (n=19) and those treated with corticosteroids (n=22), was relatively small for identifying prognostic factors. Corticosteroids are the recommended treatment for patients with severe AH [1]. In this study, corticosteroids were used in only 27% of patients, even though the included patients all had severe AH. Although corticosteroids are not absolutely contraindicated, they are not frequently used in the setting of infections, gastrointestinal bleeding, and acute kidney injury. In this study, infections (24%), gastrointestinal bleeding (21%), and acute kidney injury (44%) were frequent, which may explain the low rate of corticosteroid use in this study. However, the exact reason that corticosteroids were or were not used cannot be ascertained because of the retrospective nature of the study. Hence, the findings from our study warrant further evaluation using a larger cohort.

In summary, after the MELD-based allocation system was implemented, DDLT increased in patients with severe AH, which increased overall survival. LT was a significant prognostic factor for overall survival, with a large difference in survival according to LT (88% vs. 44% at 1 year). However, recidivism was also a concern, as there was one case of mortality due to recidivism in this study. The MELD score and corticosteroid response were factors associated with TFS and, therefore, could be used to help predict patient prognosis and plan management options. Further studies evaluating optimal selection criteria for emergent LT in patients with severe AH are urgently needed in Korea, as the current MELD-based allocation system does not consider the period of abstinence or have criteria to justify the use of precious liver grafts for severe AH patients.