Congenital factor X (FX) deficiency is a rare autosomal-recessive disease that induces bleeding disorder. Herein, we present the 10-year posttransplant course of a pediatric patient who underwent liver transplantation (LT) with portal vein (PV) stenting for correction of severe congenital FX deficiency, with focus on long-term maintenance of coagulation function and patency of PV stenting. A 17-month-old infant with recurrent hemorrhagic episodes due to FX deficiency underwent split LT using a left lateral section graft. The graft-recipient weight ratio was 2.2%. The graft implantation procedures were performed by following the standard pediatric split LT procedure. Nevertheless, a wall stent was inserted due to PV anastomotic stenosis on posttransplant day 1. Graft function recovered slowly because of partial parenchyma infarct, and the patient was discharged at 46 days after LT operation. The FX activity started to increase soon after LT and gradually normalized; the coagulation profiles have been maintained well for the past 10 years. The patient has been doing well for the past 10 years after LT without any episodes of abnormal bleeding. Due to the risk of vascular complications owed to PV stenting, life-long follow-up is mandatory with special attention until attainment of complete physical growth to adolescent and adulthood.

Congenital factor X (FX) deficiency is a rare autosomal recessive genetic disease that induces bleeding disorder. Patients with moderate-to-severe FX deficiencies may have symptoms similar to that of hemophilia A and B, including hemarthrosis, intracranial hemorrhage, and gastrointestinal bleeding [1,2]. The diagnosis can be confirmed by an FX assay. Fresh frozen plasma (FFP) and prothrombin complex concentrates have been used as a temporary treatment for bleeding symptoms.

We previously reported our first case of liver transplantation (LT) for correction of severe congenital FX deficiency in a 17-month-old baby with recurrent hemorrhagic episodes [3]. In our previous case, the patient underwent portal vein (PV) stenting due to anastomotic stenosis one day after LT operation. We herein present the 10-year posttransplant course of the same patient with a focus on long-term maintenance of coagulation function and long-term patency of PV stenting.

This study was approved by the Institutional Review Board of Asan Medical Center, and the requirement for informed consent was waived.

The patient was born through a full-term normal spontaneous vaginal delivery. At 1 month of age, generalized tonic-clonic seizure developed due to subdural hemorrhage and abscess. She underwent craniectomy for removal of brain abscess, and at that time she was diagnosed with factor X (FX) deficiency. Preoperative laboratory tests revealed severe coagulation prolongation (prothrombin time, 4.2%; international normalized ratio [INR], 13.5; and activated partial thromboplastin time [aPTT], 106.4 seconds). The coagulation factors analysis revealed FX activity as 1%, but activities of other coagulation factors were within the normal range. After treatment with craniectomy, she experienced another episode of subdural hematoma with a seizure. Thereafter, the patient also suffered from recurrent hematochezia and received a frequent transfusion of FFP. Prothrombin complex concentrates are not available at that time in Korea, thus we decided to perform liver transplantation (LT) at the age of 10 months.

The patient’s parents were not able to donate their liver as her mother had deceased FX activity and her father was ABO-incompatible and the size of the left lateral section was too large for this patient. The genetic study of FX showed a novel nonsense mutation, c.[310C

After waiting for 7 months in the waiting list, split LT was allocated at the age of 17 months with a body weight of 11.4 kg. The donor was a 21-year-old 50 kg-weighing male. The left lateral section graft weighed 245 g; thus, the graft-recipient weight ratio was 2.2%. The surgical procedures were performed by following the standard pediatric split LT for left lateral segment graft implantation, which was the same as that of pediatric living donor LT. The recipient PV appeared to be normal (Fig. 1), thus the recipient PV stump was directly anastomosed to the graft PV. The hepatic artery was reconstructed under surgical microscopy. The duct-to-duct anastomosis was performed for biliary reconstruction. The explant liver showed normal-looking hepatic parenchyma with occasional intracytoplasmic cholestasis (Fig. 2). 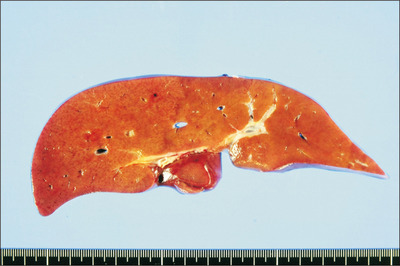 Figure 3. Posttransplant computed tomography scan taken at 1 day after transplantation. Heterogeneous low attenuation of the hepatic parenchyma (A) and segmental stenosis of the portal vein anastomosis site (B) are identified. Arrows indicate the site of anastomotic stenosis.

Figure 4. Posttransplant portal vein stenting performed at 1 day after transplantation. (A) A significant stenosis portal vein anastomosis site is identified. (B) A 10 mm×40 mm-sized wall stent is inserted across the stenosis. (C) The stenotic site is expanded after stenting. Arrows indicate the site of anastomotic stenosis.

Figure 5. Posttransplant computed tomography scan taken at 2 days after transplantation. (A) Heterogeneous low attenuation of the hepatic parenchyma was slightly improved. (B) The configuration of the reconstructed portal vein with an internal stent implicates the presence of tension and acute angle bending at the anastomosis site before stenting.

At 3 months after LT, she was readmitted due to Epstein-Barr virus hepatitis, which was uneventfully treated. She has been undergoing Doppler ultrasonography annually to check the patency of the PV stent, and it was observed that PV flow was patent with an intrastent diameter of 6–8 mm (Fig. 6). She has also received liver elastography annually to check the parenchymal status due to the potential risk of PV insufficiency from significant luminal narrowing of the PV stent, in which the consistency of the liver parenchyma appeared to be not fibrotic. The patient has been doing well for the past 10 years after LT without any episodes of abnormal bleeding. The most recent coagulation test showed prothrombin time 77.2%, INR 1.15, and aPTT 30.8 seconds. We plan to follow up the flow of PV stent at least until full physical growth to adolescent and adulthood is achieved. 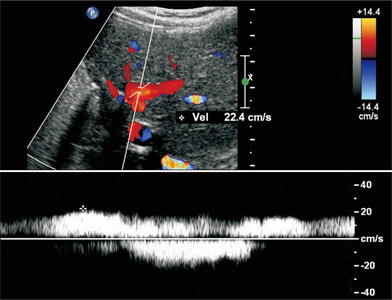 Figure 6. Follow-up Doppler ultrasonography taken at 9 years after transplantation. The intrahepatic portal blood flow is well maintained (up to 20 cm/sec) with slight narrowing of the intrastent diameter. The intrastent diameter of the portal vein was about 6 mm, which remained unchanged during last 5 years despite gradual physical growth of the patient.

Based on the plasma levels of FX coagulant activity measured through prothrombin time-based assay, patients have been classified into three groups: severe (FX:C, <1%), moderate (FX:C, 1%–5%), and mild (FX:C, 6%–10%). Severe clinical symptoms, such as intracranial hemorrhage, gastrointestinal bleeding, and hemarthrosis are uncommon in patients with FX:C level of >2% [1]. Intracranial hemorrhage is the most severe complication and an important cause of death in patients with FX deficiency. Intracranial hemorrhage usually occurs in infants between 1 and 5 months of age without any history of trauma [5]. Our patient had moderate FX deficiency (FX:C level is 1%) and experienced subdural hematoma episodes without trauma as the initial presentation and thereafter frequent development of hematochezia was observed.

The LT procedures with a split left lateral section graft was successful in this patient, but early PV stenting was required due to severe stenosis of the PV anastomotic site. In pediatric LT, PV stenosis is one of the most common but most critical complications. Our patient had the normal PV anatomy, unlike PV hypoplasia in pediatric patients with biliary atresia, thus direct PV anastomosis can be regarded as the standard technique. Analysis of 1-day computed tomography and direct portography suggested that the underlying causes of PV stenosis were sharp narrowing at the anastomotic site per se and anastomotic site tension at the reconstructed PV, which were not recognized during LT operation probably due to lack of the surgeons’ experience on pediatric LT. There exists no incidence of the occurrence of this type of PV stenosis for a long time in our pediatric LT program after our adoption of funneling venoplasty and interposition of vein conduit homograft for PV reconstruction [7-9]. If there is a great discrepancy in sizes of the graft and recipient PVs or anastomotic site tension is anticipated, the interposition of a vein conduit homograft is indicated [8,9].

PV stenting is the last therapeutic procedure to save the life of infant patients, similarly to our patient, thus it should be avoided as much as possible. The PV stent does not expand along with the growth of patients, from infant to adolescent and adulthood [10-12]. In our patient, PV blood flow through the PV stent might be sufficient for a few years after LT, but we are concerned that it can be insufficient with the patient’s growth. PV stenting during the infant period is one of the main causes of late retransplantation. Thus, we have to pay special attention to the patency of PV stent and PV blood flow to the liver through regular surveillance with Doppler ultrasonography and liver elastography.

In conclusion, we present the first 10 years posttransplant course of LT in a pediatric patient with severe congenital FX deficiency. Although coagulation profiles are corrected completely, the vascular complication with PV stenting remains. Thus life-long follow-up surveillance is mandatory with special attention, at least until full physical growth to adolescent and adulthood is achieved.